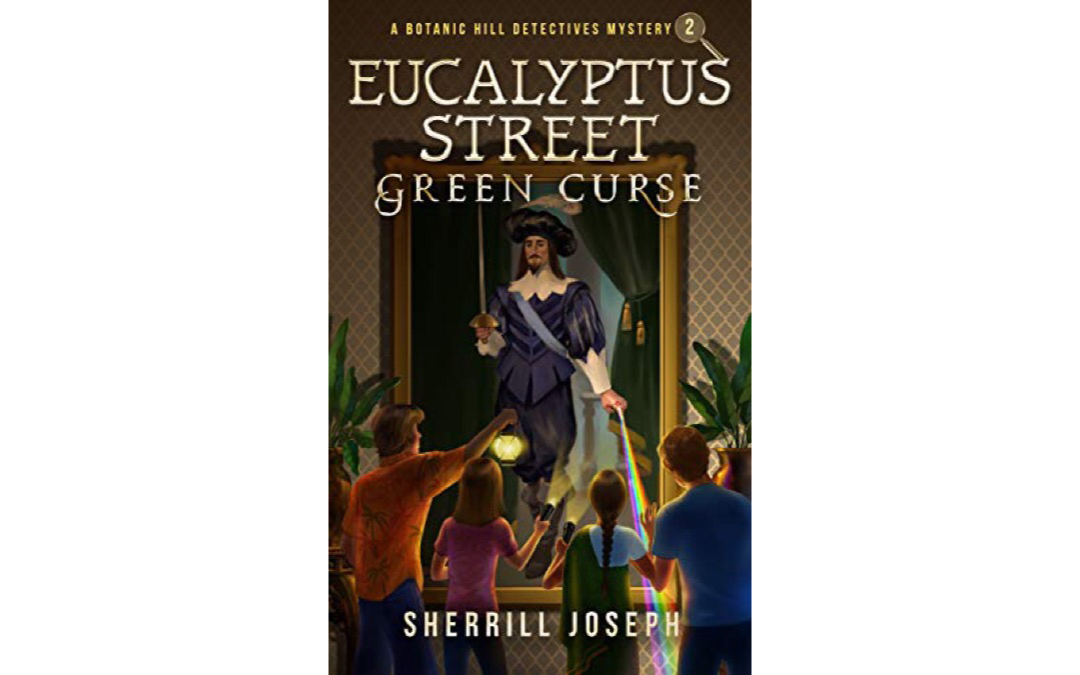 On her twenty-first birthday, Isabela receives a secret letter with a cryptic poem. These documents from the long-deceased Lorenzo invite her to hunt for the gemstone. But first, she must decipher the poem’s six stanzas for clues.

To assist, Isabela hires her thirteen-year-old neighbors, the four Botanic Hill Detectives—twins Lanny and Lexi Wyatt, and their best friends, Moki Kalani and Rani Kumar. Eerie footsteps inside the mansion, unexplained occurrences in the adjacent cemetery, and the mysterious tenant in the backyard casita challenge them. But they ingeniously make progress on the poem’s meaning with startling discoveries. Sliding wall panels, a secret room, and hidden passages reveal much. The detectives aren’t the only ones looking for the emerald. The perilous race for the de Cordoba treasure is on!” – Amazon

Dare I say it? I think Eucalyptus Street: Green Curse by Sherrill Joseph is even better than the first book in the Botanic Hill Detectives Mysteries!

The four detectives are becoming better developed and some of the things from the first book were tamed down so the story flowed even smoother. Lanny, the lexicon, is still showing off his word prowess, but he doesn’t seem like such a know-it-all. It helps that the others tease him about it. And while the boys still call each other, Bro, it feels more natural in the dialogue.
Since the kids weren’t dependent on their tutor for rides in this book, we were able to see just them in action a lot more, which also helped with their character development.

And this is just a personal preference, while I am really interested in Egyptian culture, which was in the first book, Nutmeg Street: Egyptian Secrets, there is nothing more true to me for a mystery than a big mansion with secret passages, a puzzle that must be solved, and a treasure to find. So that is another reason why I enjoyed Eucalyptus Street so much, besides the fact that it was such a good story.

The bad guys in the book were a fun twist and I also enjoyed the spooky factor that Sherrill Joseph included in the story with the witch that lives behind the mansion. It added another layer to the book.

Another great book in the Botanic Hill Detectives Mysteries, and I am looking forward to book three, Walnut Street: Phantom Rider.