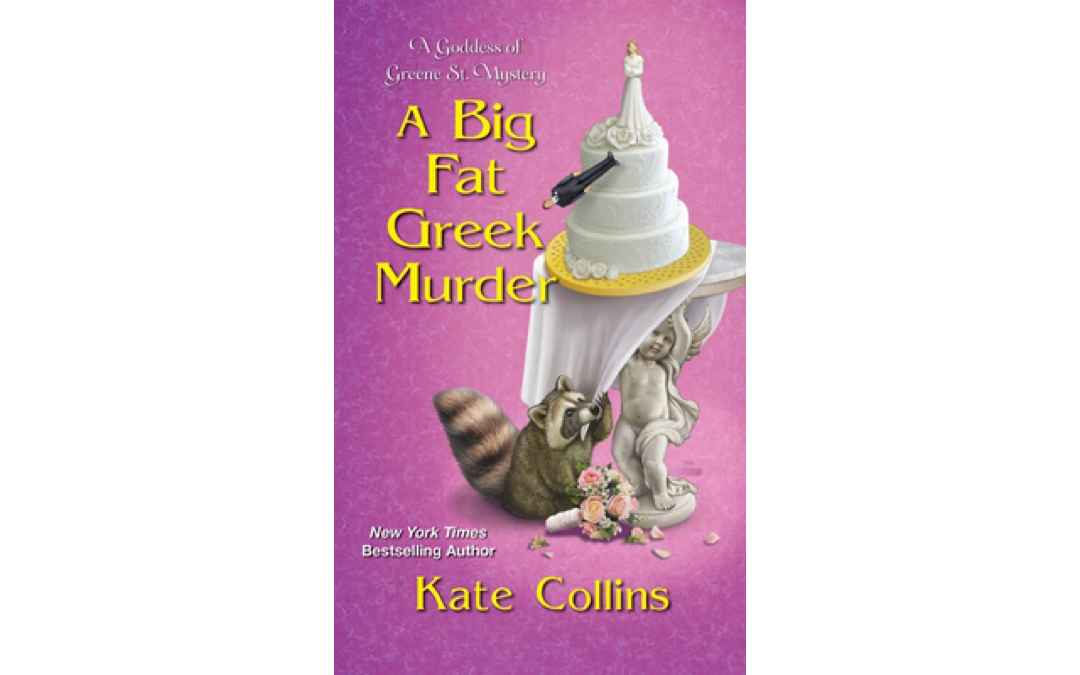 “The entire family has been put to work when a big fat Greek wedding rehearsal is booked at the Parthenon. All hands are needed for rolling grape leaves, layering moussaka, and keeping the bride calm. But then the groom goes M.I.A. and there’s far more to worry about than just whether Yiayia’s lemon rice soup has gone cold.

No matter how tangy the tzatziki, everyone’s appetite is ruined when the groom is found dead, a pair of scissors planted in his back. When the bride accuses Athena’s sister Selene, a hairstylist, of seducing and stabbing her fiancé, it’s all-out war–and it’s up to Athena to dig up the dirt on the suspects and nip these suspicions in the bud…” – Amazon

I loved the first book in The Goddess of Greene Street Mysteries, Statue of Limitations, so I was very excited to be able sit down and read book two, A Big Fat Greek Murder by Kate Collins. And in many ways it was as good, if not better than the first. I love the crazy, caring Greek family. And Delphi is fast becoming my favorite character with her psychic abilities, whether they are real or she’s just messing with her family, and I’m also loving where Delphi’s romantic life is going.

But, Kim, what about the main character, Athena? Well, I’m still enjoying her blog posts, dating mishaps, and in general. But I have some concerns. First, with her love life. I’m not a huge fan when the protagonist gets super jealous and I have a strong dislike for love triangles. I don’t think it’ll be going in the love triangle direction, and how Collins left the book could make for some funny moments in the future books, as long as Athena can get her jealousy under control.

And the thing that had me almost throwing the book into the wall, but I was reading on my Kindle and I didn’t want to break it, was towards the end when Athena had a key piece of evidence to help get her sister out of jail. Now I know in cozies, the protagonist will often hide information from the police or suddenly get really stupid, but it was a bit too much. She waits almost a day to see about it even though she or Case could have made time to find out and/or give it to Bob, the police officer who has been helping her. Numerous times in the book Athena’s dad gives her permission to leave work, anything to help her sister, and then suddenly she just can’t. I won’t even get into the final confrontation with the killer.

I was going to give A Big Fat Greek Murder three stars or even two because the evidence bit was so bad, but I ended up at four stars because Collins really is good at character development and writing about a family that is so caring and amusing. I will be cautiously optimistic when I read book three, and hope Athena doesn’t suddenly get erratically stupid or dive deeper down the jealousy hole.