A Glimmer of Death by Valerie Wilson Wesley : Book Review 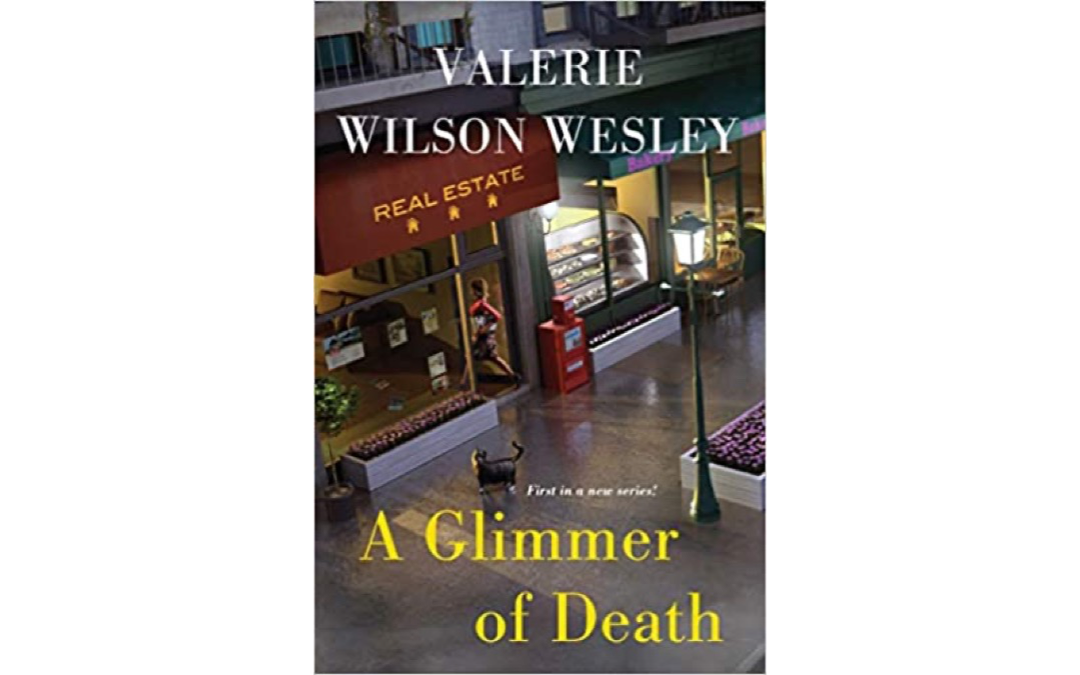 “Until now, Odessa Jones’ inherited ability to read emotions and foretell danger has protected her. But second sight didn’t warn her she would soon be a widow—and about to lose her home and the catering business she’s worked so hard to build. The only things keeping Dessa going are her love for baking and her sometimes-mellow cat, Juniper. Unfortunately, putting her life back together means taking a gig at an all-kinds-of-shady real estate firm run by volatile owner Charlie Risko …
_ _
Until Charlie is brutally killed—and Dessa’s bullied co-worker is arrested for murder. Dessa can’t be sure who’s guilty. But it doesn’t take a psychic to discover that everyone from Charlie’s much-abused staff to his long-suffering younger wife had multiple reasons to want him dead. And as Dessa follows a trail of lies through blackmail, dead-end clues, and corruption, she needs to see the truth fast—or a killer will bury her deep down with it.’ – Amazon

A Glimmer of Death by Valerie Wilson Wesley is a bit of a tough one to write about. I want you to read it because it was really good, but if you are a hardcore cozy fanatic, it may not be what you usually look for in a cozy. Most of the aspects are there, but there is a really big one that is missing… at least it was for me.

Usually in cozies there are so many wonderful characters and that’s one of the reasons that readers keep coming back. These characters become friends and you want to catch up with them when the next book comes out. But in A Glimmer of Death, a lot of the people were nasty pieces of work.
Now, I don’t want you to decide not to read it because Wesley really does a great job with character development, even the not so likable characters. And there are still characters that you will enjoy, and a lot of diverse characters too! I just want to let you know before you delve into the book… this is a review after all. 😉

I loved the premise with Dessa and her family having psychic abilities. It was a fun change to have the main character already aware of them, instead of spending half of the book realizing it. Yet, Desssa doesn’t have a firm grip on them, so we do get some exploration. And we are introduced to her two aunts who do have their powers more under control. I really enjoyed her aunt’s powers when it comes to money. Often in the supernatural community you shouldn’t use these types of powers to benefit yourself, but maybe it’s the dark witch in me that says, “Why not?!?”

I was also very happy with the way the love interest is playing out and that he was a police officer so he still has contacts on the force, but that he has a profession that matches Dessa more. Plus his grandma’s name was Odessa too, so how perfect is that. And as far as the mystery goes there are a lot of suspects and red herrings, but if you pay attention there’s a good chance you’ll be able to figure it out before the end of the book. There were two things that Wesley included that helped me come to the conclusion early.

An excellent start to a new series, and I really hope that the slight change from the usual cozy doesn’t stop you from reading it or makes you leave a negative review just because of it.