The Cure for What Ales You by Ellie Alexander : Book Review 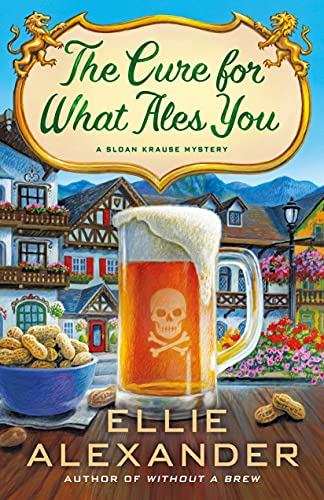 “After a long cold winter, spring is beginning to bloom in the alpine village of Leavenworth, Washington, where craft brewer Sloan Krause and her partner in crime Garrett Strong are putting the finishing touches on their bright and refreshing Lemon Kiss ale. They’ll be debuting their new line at the Maifest celebration, which will bring visitors from near and far to dance around the Maipole and shop at the outdoor flower markets.

Despite the festive spirit in the air, Sloan is brewing over her past. She’s spent months following leads that have turned into dead ends. But when she spots a woman who strongly resembles Marianne—a long lost contact who may be her only connection to piecing together her story—she hopes that things might be taking a turn in her favor. That hope is quickly smashed when Marianne is involved in the murder of a local housekeeper. To make matters worse, Marianne issues a dire warning that Sloan and her entire family are in danger. If Sloan can’t figure out who the killer is and what happened in her past, she won’t find any hoppy endings.” – Amazon

Ugh! I hate to give the Sloan Krause Mysteries by Ellie Alexander anything less than five stars because I love this series, but The Cure for What Ales You just didn’t hold up as well as her previous books in the series.

There are still the fantastic descriptions of the village, breweries, and Germanic history that Alexander infuses in this series, and which I love so much about it. As well as the wonderful and caring characters that keeps me coming back to Leavenworth, Washington. But I found myself skimming more than I would have liked due to the hectic nature of Marianne, which seemed to want to pull this cozy mystery into a suspense book, but just didn’t have the oomph to do so. Along with how much Sloan kept going over information about the possible suspects made some of the sections very long winded. Now I know that every main character does this in a cozy, but this just seemed a lot more than Alexander usually writes.

I was pleased that we finally wrapped up the questions Sloan had about her mother and childhood history that she can’t remember, but it felt a bit out there and more suited for a thriller…. which is fine, but it was something that stood out and not in a great way for me. And usually the endings are not quite as rushed in Alexander’s books, but this one was and the inclusion of the letter to finalize the story line felt like a bit of an easy out as a way to finish the book.

Will this stop me from reading future installments of the Sloan Krause Mysteries, no, no it will not!