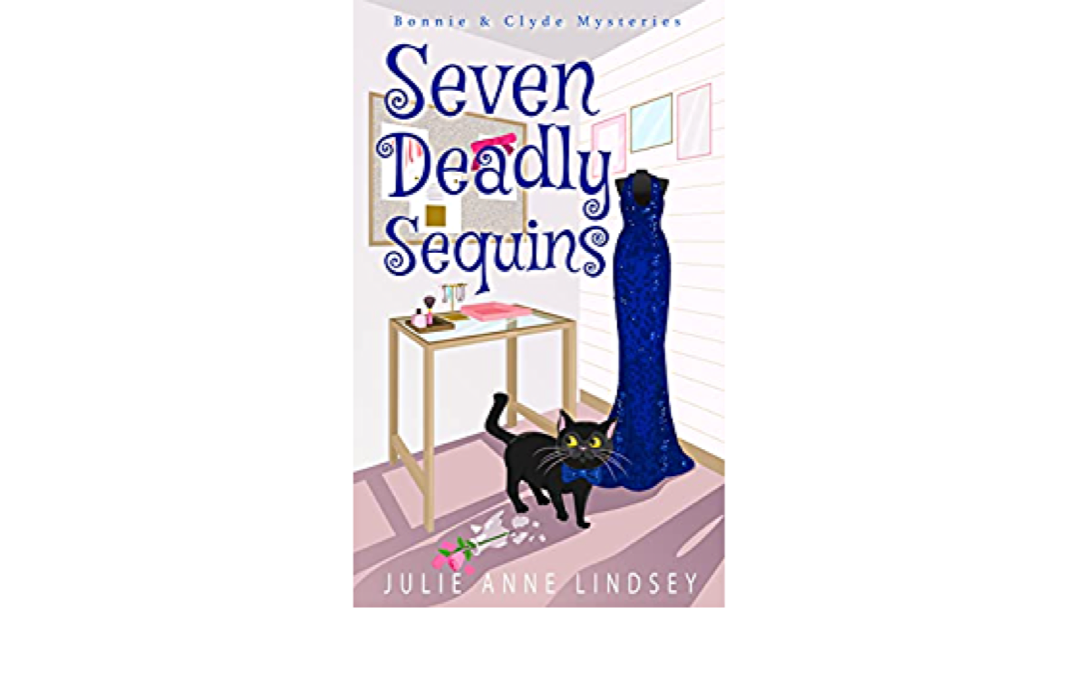 “It’s summertime in beautiful Bliss, Georgia, and while second chance dress shop owner, Bonnie Balfour, would prefer to spend her time redesigning gowns for the upcoming Founder’s Day parade, her grandma, Gigi, is too hot under the collar to concentrate. It seems Gigi’s former friend is using her recipe to sell cobbler at the local festivities, and she’s claiming Gigi’s treat as her own!

Things go from uncomfortable to downright ugly when Gigi confronts her friend publicly about the unseamly pattern of behavior, only to later find the woman dead! With Gigi’s prints on the murder weapon, and dozens of material witnesses to their earlier scrap, Gigi cuts straight to the top of Sheriff Wright’s suspect list.

Now, Bonnie and her kitty companion, Clyde, must don their sleuthing hats once more.

To mend Gigi’s reputation and deliver justice for the victim, Bonnie must lace together a string of clues about what really happened that night. Will she wind up on the killer’s cutting board in the process?” – Amazon

So many times the first book in a series is excellent and book two gets the dreaded sophomore slump, but not Seven Deadly Sequins by Julie Anne Lindsey. Book two may be even better since the main characters are becoming even more developed and we get to meet some new characters.

One of the many things that I really enjoy about this series is that Lindsey didn’t make Bonnie instantly rich by inheriting something, but instead she is actually struggling to make ends meet. But I think book three is going to get really interesting because of some of the events in this one….

I also enjoy how Lindsey deals with Sheriff Wright trying to persuade Bonnie not to investigate. Sure, he constantly tells her not to, but you can actually tell that he cares about her and isn’t saying it because he doesn’t think she can do it. So many books just have the love interest telling the main character not to investigate, and while it gets boring fast, it also feels like that they don’t believe the main character has the smarts to do so.

In Seven Deadly Sequins we get a feel for even more of the town and get to enjoy Lindsey’s detailed descriptions. And the mystery is even more nuanced in this one with lots of red herrings and an interesting ending.

The Bonnie and Clyde Mysteries is one cozy mystery series I am very excited to keep reading.