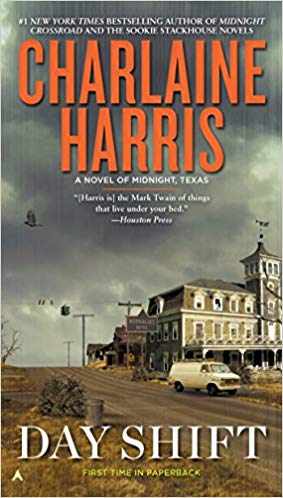 There is no such thing as bad publicity, except in Midnight, Texas, where the residents like to keep to themselves. Even in a town full of secretive people, Olivia Charity is an enigma. She lives with the vampire Lemuel, but no one knows what she does; they only know that she’s beautiful and dangerous.

Psychic Manfred Bernardo finds out just how dangerous when he goes on a working weekend to Dallas and sees Olivia there with a couple who are both found dead the next day. To make matters worse, one of Manfred’s regular—and very wealthy—clients dies during a reading.

Manfred returns from Dallas embroiled in scandal and hounded by the press. He turns to Olivia for help; somehow he knows that the mysterious Olivia can get things back to normal. As normal as things get in Midnight…

If you are an avid reader of Charlaine Harris, then you know that she has other series besides Sookie Stackhouse, and it’s HBO version, True Blood. But if you only know her from Sookie, than you are in for a treat. She actually has quite a few other series including; Lily Bard, Aurora Teagarden, Cemetery Girl (a three volume graphic novel), Harper Connelly, and her latest series, Midnight Texas.

The book that I’ll be talking about today is the second book in her Midnight, Texas trilogy, “Day Shift”. The first one in the series is called, “Midnight Crossroad”.

One of the main characters in this trilogy was also in three of the books in the Harper Connelly series. So if you’ve read that series, and have been wondering what Manfred Bernardo has been up to, then you don’t have to wonder any longer.

Midnight, Texas is a tiny town filled with lots of supernatural characters with big hearts. In the first book, “Midnight Crossroad”, you find out a few of the character’s supernatural abilities. Harris writes some clues that can help you make a good guess about some of the rest, but in this book you learn about almost all of them. Leaving a couple for you to find out about in last book.

The gist of the story is Manfred Bernardo, famous psychic, has a client die while he is giving an in person reading. The client’s son claims that Bernardo is a thief, having stolen jewels from his mother’s purse after she died.

Olivia Charity, another resident of Midnight, also happened to be at the hotel at the same time. She doesn’t want to police to be swarming around their town for reasons of her own, so she offers to help Bernardo find the jewels.

You also have side stories that fit in perfectly with the main mystery. One of them is the old hotel reopening. It doesn’t have too many rooms, and half of them are dedicated to older adults who are waiting to have a spot open up in a senior living center. But the strange part is the manager of the hotel wanted people who did not have families, and who were so down on their luck, that living in a town in the middle of nowhere would be a big step up from their current living situation. We don’t get a lot of answers for this mystery, but perhaps, we will in the next book.

Another one is a child, Diederik, is left with the Rev, who runs the church and does pet burials, as well as a few weddings a year. The Rev is not the best person to look after Diederik, since he often seems to be off in his own world. So other residents of Midnight, jump in and help, which is good, because the kid has a unique supernatural ability.

I really enjoy Harris’s writing style. She uses the perfect amount of words to show, and not tell. It feels slow paced (perhaps that Southern charm flowing through), but at the same time, the story moves along perfectly. You never read a chapter and think there was no reason for that to be in the book.

Although you could say there are two main characters this book, Bernardo and Charity, most of the other characters play a big part in this book as well. The exceptions are the married couple Teacher and Madonna, and the vampire, Lemuel, who is barely in this book. But since this book is called “Day Shift”, I’m thinking Lemuel will be a big part of the next book, seeing as how he often works the night shift at the pawn shop in town.

Now if you are a bit concerned about trying a new series by Charlaine Harris, especially if you were disappointed by the last books in the Sookie Stackhouse series, don’t worry. The Midnight, Texas series has all the goodness of the beginning books in the Stackhouse series, even more types of supernatural people, and a guest appearances in these books of other characters in her various series. I especially enjoy that because it reminds me of Kevin Smith movies.

This is a series that does need to be read in order, so go buy the first book, “Midnight Crossroad”, or reread it to help you remember what happened before you begin “Day Shift”.

*I was given a copy of the Uncorrected Proof by Ace Books. All thoughts and opinions are my own, and I was not given any money or material incentives for an honest review of this book.