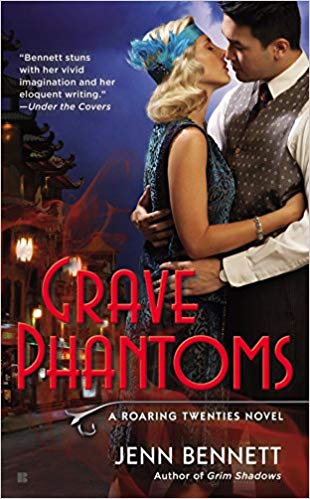 Feisty flapper Astrid Magnusson is home from college and yearning for the one thing that’s always been off limits: Bo Yeung, her notorious bootlegging brother’s second-in-command. Unfortunately her dream of an easy reunion proves difficult after a violent storm sends a mysterious yacht crashing into the Magnussons’ docks. What’s worse, the boat disappeared a year ago, and the survivors are acting strangely…

Bo has worked with the Magnusson family for years, doing whatever is needed, including keeping his boss’s younger sister out of trouble—and his hands to himself. Of course, that isn’t so easy after Astrid has a haunting vision about the yacht’s disappearance, plunging them into an underground world of old money and dark magic. Danger will drive them closer together, but surviving their own forbidden feelings could be the bigger risk.

“Grave Phantoms” is the last book in the Roaring Twenties trilogy by Jenn Bennett. The first two being “Bitter Spirits” and “Grim Shadows”. I have read all three, and this one is unfortunately not up to par with the others.

Each book centers around a different Magnusson sibling. The first one being Winter, and the second is Lowe. The first two had a really strong romance/sexual vibe, whereas this just felt lukewarm. It could be that the first two felt more intense because the relationships were just beginning. Whereas in this story Astrid and Bo have known each other since they were kids, and have turned a friendship into love.

The supernatural part of the story was pretty good, but I didn’t feel as if there was enough of it. I actually wanted to read more of that, and less about the relationship between Astrid and Bo. And when Bennett did get to the conclusion of that part of the story it felt rushed and over too soon.

The huge gap in the story for me was all the time Astrid and Bo spent away from the house, and no one even seemed to notice them missing. They were busy trying to find out more about the occult ritual that the passengers from the ship had done. Because when Astrid picked up one of the totems, she ended up getting an extra aura, that was not look good, around her.

They also found themselves a little love nest in a lighthouse, and were gone for what seemed like days, without anyone being worried about them.

Bennett did touch on the taboo of relationships between people of different cultures (Bo is Chinese) in earlier American history. I thought she did a great job bringing it to light. And the way Bo and Astrid dealt with the different situations was interesting to see.

The epilogue did wrap up the trilogy to the point where I am satisfied. You find out which couples have had kids, how they survived the Great Depression, and a glimpse into their future.

I would have given this book four out of five stars because the writing really is good, and the sex scenes were tantalizing, but there was just not enough other story for me to do so.