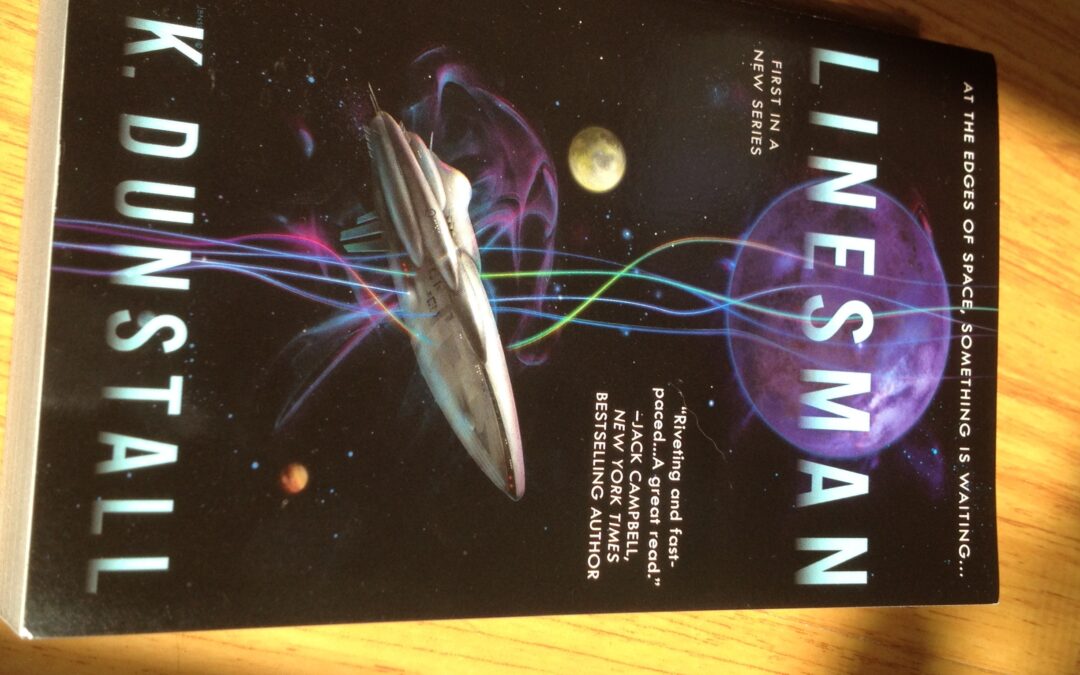 The lines. No ship can traverse the void without them. Only linesmen can work with them. But only Ean Lambert hears their song. And everyone thinks he’s crazy…

Then a mysterious alien ship is discovered at the edges of the galaxy. Each of the major galactic powers is desperate to be the first to uncover the ship’s secrets, but all they’ve learned is that it has the familiar lines of energy—and a defense system that, once triggered, annihilates everything in a 200 kilometer radius.

The vessel threatens any linesman who dares to approach it, except Ean. His unique talents may be the key to understanding this alarming new force—and reconfiguring the relationship between humans and the ships that serve them, forever.

I don’t read a lot of Science Fiction. It’s not that I don’t enjoy it, but there are often so many different names/species that I find myself losing track. That’s why I find Cozy Mysteries so easy to read, you have your usual set of characters and then add in three to five new people per book (to have some suspects for the crime), and that’s all. Besides trying to solve the mystery, you don’t have to worry about remembering which character is which.

While this book did have numerous characters, there wasn’t as many as some books. And there was really only two species, humans and aliens, though you don’t see much of the aliens. And I guess you could consider people and linesman as two different species.

To me it was a typical space Sci-Fi story; people on the verge of war, ships fighting and jumping through space, lots of politics, bull-headed captains, and a prize that can change who wins the war.

Through the lines, the ships become a living entity. It’s not realized at first, but the ship is part of the crew, doing what it can to protect them. And if the crew is unhappy or off balance, then various line will also become broken. That’s when a linesman needs to be called in to fix them.

While all of the linesman who can see up to line 10 are away fixing ships, Ean Lambert is made to stay behind because the guild that he is in commands it. Here’s one of the spots where more characters come in. There are different guilds, and thus, more political intrigue.

Ean is from the slums so he has that against him. Plus he is the only one who sings to the lines to communicate with them, so everyone thinks he’s crazy. All the other linesmen use brute force, pushing and pulling them to the outcome they desire. While this type of force does fix them, it’s more of a temporary fix. And the lines quickly get out of whack again, but the lines Ean fixes stay fixed.

At first, Ean is the only 10 available, so he is the one who is recruited to try to get onto an alien ship. Any ships that have gotten close, end up triggering the defenses and get destroyed. A couple more 10s join Ean, so you get to witness how uppity they act, especially towards Ean.

Besides the typical space Sci-Fi story, you also get a great underdog one as well. Ean is very special, but he stays humble throughout, and doesn’t become an egotistical jack-ass like the other 10s.

I really enjoyed this book, and am looking forward to the next one. If you enjoy space operas, you should give this one a read.

*Paperback copy given to me from the Ace/Roc Star publishing team. All thoughts and opinions are my own, and I was not given any money or material incentives for an honest review of this book.