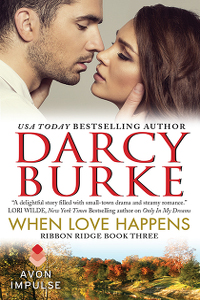 Tori Archer is married…well, on paper anyway. She hasn’t actually seen her husband since the disastrous morning after their impulsive Vegas wedding. The memories of their intense passion may still make her weak in the knees, but Tori knows their marriage was a mistake.

After six months filming abroad, television producer Sean Hennessy wants nothing more than to track down his sexy, captivating wife and get her into bed…fast. So when his boss sends him to Oregon to persuade the famous Archer sextuplets—the former stars of a reality TV show—to do a reunion special, Sean sees the perfect chance to win Tori back.

But Tori wants nothing to do with him and is determined to push him away. Yet their attraction is as hot as ever and Sean will do anything to prove their relationship was more than just a fling…because he knows that when real love happens, it changes everything.

If you’ve read any of my past reviews on Darcy Burke’s Ribbon Ridge series, then you know I’ve really enjoyed the books. And while I like this one, it had the one thing in romance novels that really drives me bonkers. The “I love you but we can’t be together/ but we should be together/but we can’t be together” plot. And it wasn’t with just the main female character, Tori Archer, but with her love interest/husband, Sean Hennessay.

There was a bit of that in the previous books, but in this one it was more blatant. With the other books the reason why they kept feeling this way had to do with how their family would feel about their relationships. But in this case it was all because of Tori and Sean, since the Archer family really wants for them to be together.

Tori tries to use tactics like those found in the movie, How to Lose a Guy in 10 Days. She acts very rude to Sean, and even childish at points. Tori knows what she is doing is horrible, but does it anyway. I liked that Burke had Sean catch on right away, and instead of getting indignant, he went along with her ploy, being a gentleman the entire time.

The side stories were great though. We get to see how the various Archer kid’s relationships from the previous books are progressing. They are all very much in love, and this is wonderful to read.

Although this series is about the Archer children, Burke focuses a bit more on the parents in this book. A scenario comes up where they can not get some licensing for one of the projects because Emily’s, the Archer’s matriarch , ex boyfriend is protesting. This brings out the alpha male in the dad, and he realizes that there are other men who did and do find his wife desirable. So it’s time for him to start doing what he needs to do to come to terms with his son’s suicide and get his wife back.

I am very interested to see how this storyline progresses in the future books.

I gave this book three stars, only because the drama of wanting/not wanting each other, was such a large part of the book. Burke’s writing is still wonderful, and I very much enjoyed reading about each character’s continuing story line. And as I’ve mentioned in my reviews for the previous books in the Ribbon Ridge series, I really enjoy how Burke writes about real life issues, such as suicide and Asperger’s syndrome, since this may help some people open up or feel more comfortable about their own situations.