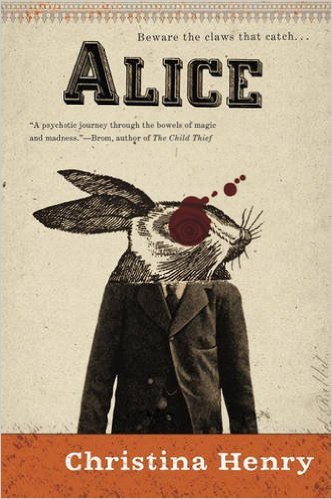 In a warren of crumbling buildings and desperate people called the Old City, there stands a hospital with cinderblock walls which echo the screams of the poor souls inside.

In the hospital, there is a woman. Her hair, once blonde, hangs in tangles down her back. She doesn’t remember why she’s in such a terrible place. Just a tea party long ago, and long ears, and blood…

Then, one night, a fire at the hospital gives the woman a chance to escape, tumbling out of the hole that imprisoned her, leaving her free to uncover the truth about what happened to her all those years ago.

Only something else has escaped with her. Something dark. Something powerful.

And to find the truth, she will have to track this beast to the very heart of the Old City, where the rabbit waits for his Alice.

I have never read the original Alice in Wonderland, although I’ve seen various movie versions. Even as a kid I thought they were a bit dark. I’m happy that Christina Henry turned the story even darker.

I also liked that she didn’t write the story in such a way to turn it into a series, although she could have easily (although, maybe she is thinking of continuing…) There are so many series out there, that’s it’s nice to just read a book, enjoy it, and be done. No more having to keep track of when the next one is coming out, or what happened in the previous one.

I imagine most people know the story of Alice in Wonderland, but Henry did a wonderful job of turning it into a Dystopian world. There’s the New World and the Old World. Old World is crumbling and various parts have turned into territories run by gangsters. The gangsters are the Chesire Cat, Caterpillar, etc…

Before you may have thought the Chesire Cat crazy and Caterpillar stoned, but Henry makes them very dark. They make money by selling information, girls and whatever else people want. Some of the scenes are very disturbing; where the girls are being held in cages, or have been turned into creatures by having wings sewn onto their muscles. There is terror everywhere, and Alice does what she can to make it right.

You may be wondering how a girl, now woman, who has been in an insane asylum for the last ten years has the skills to fight such demented men. That’s where Hatcher, the man who was in the cell next to her comes in. Hatcher was in the asylum for using an ax to kill a lot of people. They may have only had a mouse hole in which to see each other over the ten years, but they came to trust and love each other.

The whole time Alice and Hatcher are hunting down the various gangsters, ultimately leading them to the Rabbit, the Jabberwocky is killing everyone it comes across. So Alice has a lot to deal with, while trying to find the magical object that will put the Jabberwocky back into it’s cage. Finding out if she succeeds is one heck of a violent and horrific adventure that I highly recommend you read.