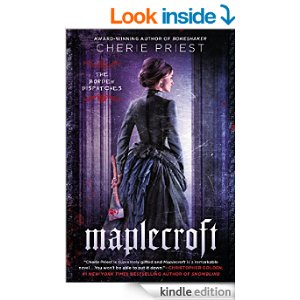 Lizzie Borden took an axe and gave her mother forty whacks; and when she saw what she had done, she gave her father forty-one….

The people of Fall River, Massachusetts, fear me. Perhaps rightfully so. I remain a suspect in the brutal deaths of my father and his second wife despite the verdict of innocence at my trial. With our inheritance, my sister, Emma, and I have taken up residence in Maplecroft, a mansion near the sea and far from gossip and scrutiny.

But it is not far enough from the affliction that possessed my parents. Their characters, their very souls, were consumed from within by something that left malevolent entities in their place. It originates from the ocean’s depths, plaguing the populace with tides of nightmares and madness.

This evil cannot hide from me. No matter what guise it assumes, I will be waiting for it. With an axe.

I love when authors take well know fairy tales and reimagine them. Lizzie Borden was a real person, so I was even more intrigued to see what Cherie Priest would do with her story. And Priest did not disappoint. She took a true story and added Cthulhu mythology to it, making a very interesting tale. If you look at the Wikipedia page for Lizzie Borden, you can see how Priest incorporates many parts of Lizzie’s life into her fictional story.

This book was written from various points of view by Lizzie, her sister (Emma), her lover (Nance), the doctor (Owen), a fellow scientist (Philip), and a detective (Simon). The story flows through not only personal narratives, but letters and newspaper articles. Which really gives it an authentic feel to the time period of the late 1800’s.

The style of writing reminded me a lot of Bram Stoker’s Dracula. It is also told from various points of view, as well as letters, journal entries, and newspaper articles. It takes place in the late 1800’s, and is also a Lovecraftian horror.

If you are not familiar with the horror sub-genre, of Lovecraftian, it’s description fits Maplecroft perfectly.

“Lovecraft refined this style of storytelling into his own mythos that involved a set of supernatural, pre-human, and extraterrestrial elements. His work was inspired by and similar to previous authors such as Edgar Allan Poe, Algernon Blackwood and Lord Dunsany.

The hallmark of Lovecraft’s work is cosmicism: the sense that ordinary life is a thin shell over a reality that is so alien and abstract in comparison that merely contemplating it would damage the sanity of the ordinary person. Lovecraft’s work is also steeped in the insular feel of rural New England, and much of the genre continues to maintain this sense that “that which man was not meant to know” might be closer to the surface of ordinary life outside of the crowded cities of modern civilization. However, Lovecraftian horror is not restricted to the countryside; “The Horror at Red Hook”, for instance, is set in a crowded ethnic ghetto.”

Two years prior, Lizzie had taken an ax to her father and step-mom, but we find out it was in self defense. They were slowly turning into bloated creatures with white film over their eyes, that were driven to listen to the ocean and cause violence. And it’s starting to happen again.

Unfortunately this is also when Lizzie’s lover, Nance, decides she is going to come to visit. Lizzie has her hands full trying to keep her secret laboratory in the cellar from Nance, and trying to protect the house from these creatures that begin to turn up. Lizzie also has to take care of her invalid sister, Emma, so she is running herself ragged.

Lizzie and her sister really can’t tell anyone because they will be sent to the insane asylum, but the doctor, Owen, had seen Lizzie’s step-mom the night before she was killed, and believes them. It’s a good thing that Lizzie finally tells him because she needs all the help she can get. Especially now that the scientist, Philip, has become infected from a sample that Emma sent him, and is slowly making his way across country to where the sample originated from.

The story is steady, and while there are not fast action scenes, Priest does a wonderful job in slowly building the tension. She also has great descriptive scenes of the people turning into the sea creatures, and the creatures themselves. I really enjoyed this one and am looking forward to reading book two, Chapelwood.