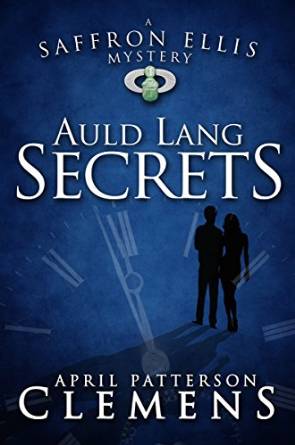 After Saffron Ellis returns to Ville de Bois, Wallace Hadley just knows his life is about to get more exciting. When a girl ends up dead at a New Year’s party, Saffron and Wallace decide to solve the murder themselves, and Green Scarab Investigations is born!

In Auld Lang Secrets, book one of the Saffron Ellis mystery series, you’ll be introduced to Saffron’s eccentric family, peer into the souls of the residents of Ville de Bois, and discover Wallace’s deep love for food. Come along for the cozy, clue-filled ride!

Being a long time lover of mystery novels, I was eager to try out a new author, and was not disappointed. I was a bit concerned since the book is under 200 pages, and most mysteries I read average 300 to 400, but April Patterson Clemens did not need more words to tell the story.

In fact I have to say it was refreshing to read a mystery where the female sleuth is not constantly agonizing over her love interest. Now that I think about it, the other mystery series I read would have less pages if the author did not write the main character’s every thought in regards to her relationship, or lack thereof.

I do not read a lot of the classic mystery authors, mainly sticking to cozy mysteries, but Clemens’ novel reminded me a bit of Sherlock Holmes. Wallace is the Watson to Saffron’s Sherlock. Wallace is the one writing the story and going along with Saffron’s crazy ideas, all while enjoying a good snack or two.

I also got some Agatha Christie vibes going on with the way the story was wrapped up. Saffron insisted that all the suspects return to the scene of the crime, while she laid out what happened and who was the murderer.

I was a bit confused with Wallace’s name. Sometimes he was called Walfred and other variations. I knew who the author was talking about, but I kept wondering if I had missed something. Was Saffron just calling him nicknames? Where did the nicknames come from? Is there a backstory to them that I missed. Maybe his name was just another mystery to solve?!?

Clemens did a wonderful job keeping me guessing who could have committed the crimes. She would have Saffron and Wallace leading in one direction, and then decide on something else. And I felt myself thinking, “That makes sense. It could be them.”

Clemens also did a beautiful job in developing the characters. You can feel the love and friendship between Saffron and Wallace. Then there’s the desire that the detective still feels for Saffron. She also did a great job writing the other characters. I felt myself disliking a couple of them because of the way they were described. And I’m looking forward reading more about Wallace’s relationship with his mother. I can see some great scenes that could involve those two characters.

I am already looking forward to book two in the Saffron Ellis Mystery series. This was a fast, enjoyable read that left me chuckling about the characters quirks after I finished the last page.

And Clemens isn’t just a writer, but also a musician. I listened to her album, Heart in a Golden Cup, while writing this review. It reminds me of something you would hear in a coffee shop, before an Indigo Girls concert, or at a Renaissance faire. I’ll be adding it to my music list. It’ll be nice to listen to at work or while I’m enjoying a quiet night with a glass of wine.

Q: Being a book lover, your second name stood out to me. Any relation to Richard North or James Patterson?

A: Not that I’m aware of. My great grandfather, Jessie Patterson, was an Irish cowboy, so not unless either are some relation to him.

Q: This is your third novel (The Tale of Lord Zancrist and Bartholomew Trinket, being the first two), which all centralize around a mystery, do you read a lot of mysteries?

A: I cut my teeth on Sherlock Holmes in my younger days. I like Agatha Christie’s books, as well as the two BBC shows Poirot and Marple based on her novels. I’m an old fashioned mystery lover, I suppose. I also just love Agatha Christie the person. I’ve read her autobiography a couple of times. It’s one of my favorite books. She was someone I’d like to have met.

Q: Which are your favorite books/authors?

A: As I said, I’m rather old fashioned. I once went through a period where I didn’t read any fiction less than 100 years old! Nowadays, I usually read about history, especially WWII. I also love Greek mythology and fairy tales. They generally get to the heart of human nature.

Q: Before writing a book each author has a different method. Some do an outline, post-it notes all over the walls, or even a white board with diagrams. What is your system for writing a book?

A: I’ve gone through several methods. I used to swear by handwriting in Marble notebooks. That’s how I wrote the first two books. I had no idea what either would be about, no outline or anything. I’d just lay down on the bed (this was also Mark Twain’s preferred writing posture) and let the story unfold, let the characters speak. This, however, can take years!

For a mystery novel, I found I needed more structure. I outlined it in a notebook—who gets killed, why, who the suspects will be, etc.—and then pecked it out on my Mac. Much more efficient! I had a separate file where I’d write notes about what needed to happen in the story that I’d reference.

Q: You are an artist with many talents, including musician and photographer, where does your love of music come from?

A: My grandfather played piano, accordion, harmonica, and the banjo. Growing up in Texas, I remember gatherings with family around the piano in my grandparents home, everyone singing and having a grand old time. That changed the older I got. It’s not something people really do anymore.

When I was in high school and after, I sang in some bands—one was a 10,000 Maniacs cover band and another was more of a pop-punk kind of thing—but I was really happy after I taught myself guitar and started writing all my own songs.

Q: As for the photography, how long have you been shooting? Is there a certain subject you enjoying capturing a bit more than others?

A: I remember my first camera. My grandfather bought it for me. I’d set up photo shoots with my teddy bear and was very serious about it! In high school, my best friend and I swore by black and white film.

I love to photograph old objects, funny shaped trees, ornate dilapidated buildings—things with a history. A couple of years ago, I did one photo shoot of fancy, vintage doors. At one house, an older woman asked what I was doing and when she found out I was taking pictures of her sorry, old door, she was tickled to death! She had to tell her neighbor.

A: I am eagerly looking forward to book two in the Saffron Ellis Mystery series, any estimates as to the release date? And what about your next CD?

Q: Foul Murder at Fable’s Mansion is stewing in the crock pot as we speak. I’ve just about got the outline down and expect it should be all ready in just a few months.

I’m planning to do some online shows on either ConcertWindow or Stageit, possibly by December. I have plenty of songs for a new CD—my problem is finding time to record! I seriously have too many projects—I’m also painting, writing a screenplay—so I’ve had to make my main focus writing in order to finish something. When all’s said and done, it’s my deepest passion.