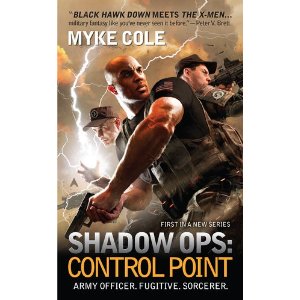 Across the country and in every nation, people are waking up with magical talents. Untrained and panicked, they summon storms, raise the dead, and set everything they touch ablaze.

Army officer Oscar Britton sees the worst of it. A lieutenant attached to the military’s Supernatural Operations Corps, his mission is to bring order to a world gone mad. Then he abruptly manifests a rare and prohibited magical power, transforming him overnight from government agent to public enemy number one.

The SOC knows how to handle this kind of situation: hunt him down–and take him out. Driven into an underground shadow world, Britton is about to learn that magic has changed all the rules he’s ever known, and that his life isn’t the only thing he’s fighting for.

I have to thank Ace/Roc Publishing. They keep sending me books I wouldn’t normally read, but then end up really enjoying. I have never read a military ops book before. In bookstores, I would completely avoid that section, thinking of it as guy’s books. But I think any woman who enjoys supernatural stories, would really like this one.

This book is really fast paced, and the quotes at the beginning of each chapter gives it a newscasting feel, which lends even more urgency to the book. The military operations are also quick. Get everyone in fast, take down the enemy, and onto the next mission. But while they were fast Myke Cole wrote them in such detail that it also felt like time had slowed down so the reader could perfectly see all the action that was happening.

The protagonist, Oscar, starts the book out with everything in black and white. He knows who the enemy is, and his job is to eradicate them. That is until he comes across two teens that his team are supposed to kill. They do it, but he’s left with questions, and suddenly the world isn’t black and white any more.

I can see how this would be frustrating to people who read books where the guy is a man’s man. Doing whatever needs to be done, never questioning anything, and getting the hot chick. But I think people who read Urban Fantasy, Fantasy, and even Romance will enjoy Oscar. While he does waffle back and forth, there is character development along with it. Not only of him, but of his teammates, and others in the special camp.

There have been times when I just couldn’t finish a romance book because the main characters were; I hate you, I love you, I hate you, etc….  And while Oscar wasn’t having that feeling with a person, that is how he felt about his situation. And honestly I feel that way about my own job, and I think a lot of people do.

As for the number one way I judge a fantasy book, the world building, Cole did an excellent job. The details for the camp and other worlds was amazing. And the natural inhabitants of those worlds were described wonderfully. We do get to know a bit about one of the goblins, Marty, which really enhanced the story. And the horse creatures that mocked you and then killed you really creeped me out. I’m looking forward to the next book in the Shadow Ops series, Fortress Frontier.