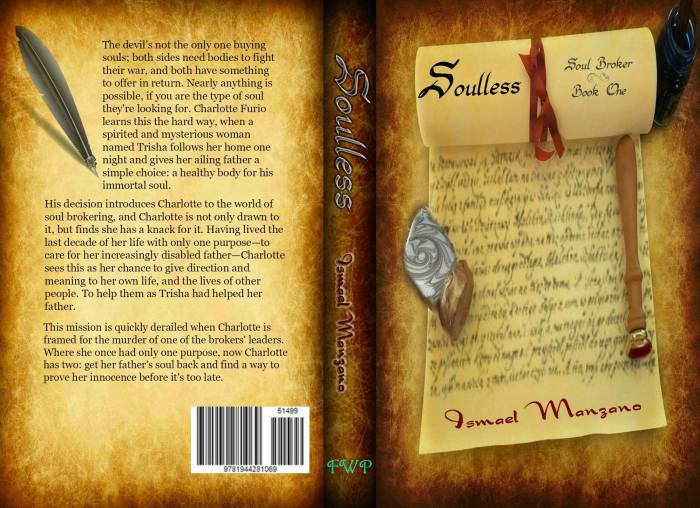 The devil’s not the only one buying souls; both sides need bodies to fight their war, and both have something to offer in return. Nearly anything is possible, if you are the type of soul they’re looking for. Charlotte Furio learns this the hard way, when a spirited and mysterious woman named Trisha follows her home one night and gives her ailing father a simple choice: a healthy body for his immortal soul.

This mission is quickly derailed when Charlotte is framed for the murder of one of the brokers’ leaders. Where she once had only one purpose, now Charlotte has two: get her father’s soul back and find a way to prove her innocence before it’s too late.

Charlotte is at the end of her rope, caring for her father. She wants to, but there’s something inside of her, scratching at her, and she has to get away. But she always comes back. One night though, a stranger follows Charlotte home, and entices her father to give up his soul.

Charlotte had no idea this was even a thing, but is quickly immersed into a world of soul brokering, which is actually something she is very good at. While trying to get her father’s soul back, and trying to prove she is not a killer, she is led into a world that few people actually see.

This is a great beginning to a new Urban Fantasy series. The story of deals being made for souls is nothing new, but the way Manzano presents it, is very unique. And the hidden from the everyday world that he creates is fascinating. I can see it becoming even more in depth in future books.

One of the best parts of Urban Fantasies, besides the new worlds, is how the characters develop throughout the series. Charlotte grows up a lot, going from a woman running from her obligations, to digging deep inside of herself and finding the courage to help other people, and stand up to some really terrifying creatures.

Manzano did a great job of keeping the tension high, and the twists and turns coming. His use of pop culture references throughout the story added a bit of fun to the story, and helped to showcase how TV had become an escape for Charlotte.

Another great book from Fantasy Works Publishing. I look forward to the next one in the Soul Broker series.

I walked around the car so I could jump into the passenger’s seat, waited for the crowd to thin and calmly—barely holding onto my senses—asked for the knapsack. It weighed nothing, but when I opened it, I found a parchment resting peacefully and eagerly inside of it. The full moon was out, and the sky was cloudless and unobtrusive, so when the pale, silvery light touched the papyrus, it was not reflected but enhanced. Trisha started the engine, and put the convertible’s top up to block the moonlight, then adjusted her mirror. Her face glowed nearly as bright as the papyrus.
The windows were tinted so I felt safe removing the parchment completely from the bag. The second my hand touched it, I felt a rush of something inexplicable, like a jolt of pleasurable lightning traipsing through my nerves and extending outward to the world at large. At first, I thought Trisha had pulled out a taser gun and had shocked me, but nothing hurt. I closed my eyes and allowed myself to enjoy the strangeness of the sensation. Shivers passed through me randomly, tingles that lit my skin. Without knowing how, I knew those shivers were my body’s reaction to people passing alongside the car. It was as if I was connected to the air through which they moved. I heard the wind pushing through the desiccated leaves still clinging to their branches, and it sounded like water rushing around a brook. The smells of the city, even through the confinement of the car, assailed my nostrils as if someone had bottled it up and threw it—concentrated—into my lap.

Ismael Manzano was born and raised in New York City, and has lived his entire life in the Bronx, first with his parents, and then with his lovely and talented wife, Justine, and now with their kinetic maelstrom of a child, Logan.

Ismael is an avid reader of fantasy books, and knew at an early age that he wanted to be a writer. He worked his entire life to hone his craft to achieve the goal of removing the prefix, ‘aspiring,’ from his title, and referring to himself as a writer.

He has written many reviews and social commentaries for the web magazine, G-pop.net. Recently, Ismael has found success publishing his short stories, Playing in Shadows, at This Dark Matter (www.thisdarkmatter.com) and Cold, published in July 2015, at Grey Matter. In 2015, Fantasy Works Publishing signed his Urban Fantasy series, Soul Broker.

Ismael loves watching historical documentaries and listening to audio lectures about Medieval England, Ancient Rome, and Egypt. He considers himself an amateur historian, and has never met a BBC historical drama he didn’t like. One of his favorite things to do is to watch shows like the Tudors and movies like Elizabeth, and try to pick out the discrepancies between fact and fiction. He also hopes to one day solve a Rubix Cube puzzle, but that dream, sadly, seems to be the greatest fantasy of them all.