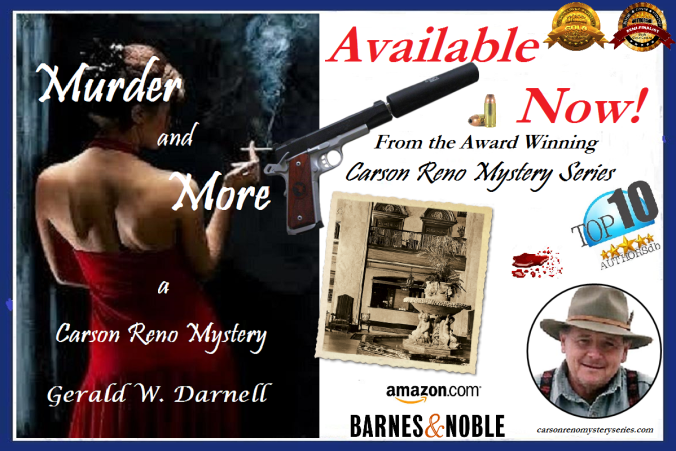 Carson’s feud with a local crime reporter continues, and then suddenly the husband of his client is brutally murdered – a husband he’s been hired to investigate. Mysterious characters weave a web of blackmail and suspense, while leaving Carson with more clients than he can handle.

The Memphis police have warned Carson to back off, but an employee of a friend is missing from a murder scene and he’s determined to find her and the killer.

Follow Carson to New Orleans, Humboldt, Memphis and Florida where he chases numerous suspects trying to track down a missing person and the killer he’s been hired to find.

Enjoy this unusual adventure for Carson Reno, as he struggles to solve the case of ‘Murder and More’.

I don’t read a lot of hard-boiled crime, and this being book 14 in the Carson Reno Mystery series, I was a bit concerned that I might get lost with all of the characters, but I was pleased that was not the case. Gerald Darnell included enough back story that it was easy to follow along. And I also liked that he included previous case files/book titles so you knew which books the characters came from.

I really enjoyed the style of this novel because it included pictures of historical places that Darnell was writing about, as well as other photos to enhance the story. It’s not often that adult novels contains pictures, so this was a nice change.

The main characters were well developed, and the extras were developed enough that the story flowed well. It was enjoyable getting to see a glimpse of the 60’s, since that was a bit before I was born. The mystery itself was very well written, everything made sense, and there was enough twists and turns to keep it interesting.

There was one thing that stood out to me, and broke my flow while reading, but it wouldn’t stop me from reading more novels in the Carson Reno series. It was in regards to the dialogue, mainly between Ava and Carson. Even after Carson asked her to call him Carson, she kept saying, “Mr. Reno…. Carson.” This also happened when the police were talking to Carson.

And Carson would answer a lot of times with, “Hmm…” of something similar, when really no reply at all was needed. To me it just felt like filler to make the book a bit longer, and was not really necessary.

If you enjoy hard boiled detective stories in the vein of Mike Hammer or Philip Marlowe, I would say to definitely give this one a read.