Any Witch Way You Can by Amanda M. Lee : Book Review 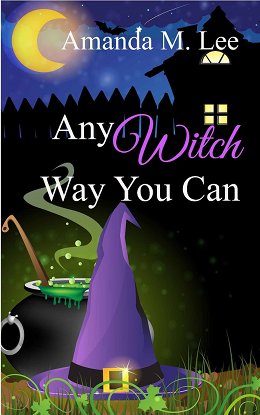 Bay Winchester is having a tough week. As the local editor of Hemlock Cove’s only newspaper, she just happens to be present when a body is found in an area corn maze. To make matters worse, the police believe the murder may have something to do with the occult. This wouldn’t be a problem for a normal reporter, but since Bay is descended from a well-known line of actual witches, the town is understandably on edge.

Between the suspicious townspeople, the befuddled police presence, and that random hot biker guy who may or may not have something to do with the murder — Bay has her hands full. When you add the typical family problems, multiplying ghosts — and one monster of a zit that she’s sure came from her aunt’s curse — Bay is just struggling to make it through the week. Of course, when the killer sets his sights on Bay, things could get a whole lot worse.

There was so much for me to love about this book, and I’ve already got book two, Every Witch Way but Wicked, in my Kindle, waiting for me to finish a couple of other books first…. And I really don’t want to wait.

If you know anything about me, or have read any of my other reviews, my favorite type of book is one with witches. The dynamic of three (three sisters, each of them having a daughter) represents itself perfectly with witchcraft and the Three-Fold Law. I really enjoy witch books where authors put in bits of witch lore, whether it be particular herbs or flowers and how they are incorporated into spells, or the principles of the Craft.

The character development between Bay and her two cousins, and their Great Aunt Tillie is done very well. We also get some development from the aunts, but not as much. So it will be interesting to see how Amanda Lee does this in future books.

The town was perfect for a cozy mystery, and one I would enjoy visiting if it actually existed. And the three ghosts that Bay encounters are very amusing. Between them and Aunt Tilly, I was laughing out loud. I’m looking forward to more ghosts in the future books.

Some people had commented how the bickering between the family was too much for them. I personally thought it was just the right amount. Families squabble, even more so sisters and strong opinionated women, but you knew they had each other’s back, even when moments before, one of them had declared that another was, “dead to me”.

If you enjoy a light cozy with supernatural elements, and a cast of goofball characters, then I highly recommend this one.