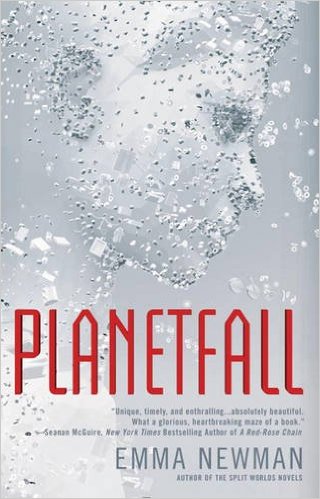 Renata Ghali believed in Lee Suh-Mi’s vision of a world far beyond Earth, calling to humanity. A planet promising to reveal the truth about our place in the cosmos, untainted by overpopulation, pollution, and war. Ren believed in that vision enough to give up everything to follow Suh-Mi into the unknown.

More than twenty-two years have passed since Ren and the rest of the faithful braved the starry abyss and established a colony at the base of an enigmatic alien structure where Suh-Mi has since resided, alone. All that time, Ren has worked hard as the colony’s 3-D printer engineer, creating the tools necessary for human survival in an alien environment, and harboring a devastating secret.

Ren continues to perpetuate the lie forming the foundation of the colony for the good of her fellow colonists, despite the personal cost. Then a stranger appears, far too young to have been part of the first planetfall, a man who bears a remarkable resemblance to Suh-Mi.

The truth Ren has concealed since planetfall can no longer be hidden. And its revelation might tear the colony apart…

This was an interesting, but ultimately unsatisfying book.

To be perfectly honest, there’s a bit of a reveal partway through the book the floored me. It was completely unexpected, and it’s this reveal, and what Planetfall is attempting to tackle, that makes me glad I read this book, even though I’m rather disappointed by it.

In Planetfall you’re presented with a small group of humans who have established a small Star Trek like community on a new planet. This starts out interestingly enough, but quickly gets weird. But it’s not sci fi weird, well, it is, but even with this, the sci fi elements of this story felt mostly like window dressing.

At heart, this is a story about loss and coping with that loss, which is a theme well established across all genres, but in Planetfall it doesn’t quite work. The best stories, whether sci fi or otherwise, use the genre to tell a story you can relate to, but with Planetfall, the genre and the story just aren’t meshed very well.

As a result, what is actually a good story gets lost in what feels like an author trying too hard to make an arty sci fi book.