The Birth of Death by Joseph Macolino : Book Review 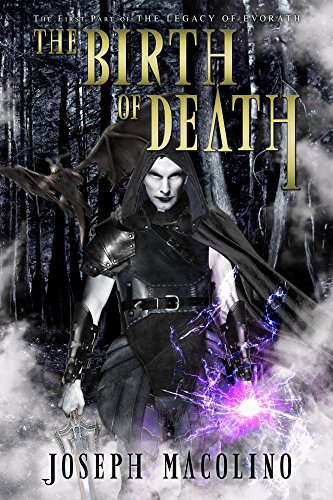 Meet Artimus, the head investigator for the elvish kingdom of Erathal who begins to notice the flaws in his apparently perfect society. As he develops feelings for Savannah, a beautiful elvish druid hiding an important secret, he struggles to separate his personal feelings from his responsibilities to the kingdom.

In a nearby center village, the young warrior Irontail struggles to distinguish himself in a tribe where independent thought is discouraged. When their paths cross, they both discover that their own people’s shortcomings may be the least of their concerns. Putting aside their own personal troubles, they must fight against the clock to ensure the very survival of their peoples. As they work towards this common goal, they find that they each have their own, unique gifts to offer. But, will they be strong enough to survive?

The first tale of many taking place in the world of Evorath, this series gives readers the thrill of a fantasy epic while introducing heroes that probably have more flaws than they do good. One thing is for sure: at the end of it all, nothing will be the same.

Macolino does a superb job constructing a new fantasy world. The details of the various creatures, or races, is very in depth, and the way their villages are described makes one feel as if they are actually there.

Although this is a story that has been told many times, Macolino puts his own unique spin on it. Even adding some interesting new twists to the idea of political corruption and races standing up for what is right. (Which is really timely with the current elections coming up soon in the United States.)

At times this book goes really in depth into what a particular character is doing. While sometimes this is necessary, and it brings more understanding to a character, I didn’t think some of the parts were important enough to include in the book. One instance that comes to mind is when Savannah is making dinner for Artimus. I read it in full thinking that there was importance to it since she had been using leaves from a tree that was thought to be extinct, but I couldn’t see any.

I read a lot of Urban Fantasy in which the love relationship is just as important as the mission. But I just didn’t get into it in this case. I wouldn’t say it was filler, but I think it could have been deeper. I wasn’t really rooting for their relationship, I wanted to read more about the battles and political intrigue.

Although Artimus is the main character I really would have loved to have it been Irontail, the Centaur. For me, he was much more interesting, and had the most growth. If Macolino does continue writing about this world, I definitely want a lot more of Irontail.

A great beginning for this new world, and Macolino does a fantastic job setting up this book for future stories. If you enjoy epic fantasy, I highly recommend this one.