31 Days of Horror; Tucker and Dale vs. Evil : Movie Review 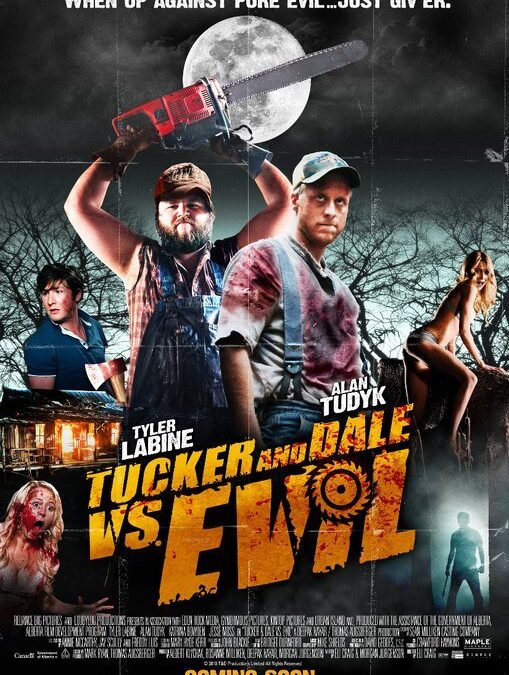 Shaun of the Dead meets Texas Chainsaw Massacre in this gory comedy about two southern guys mistaken for hillbilly psychos by a group of college kids. As the misunderstanding grows, so does the body count!

I don’t know if this one has a cult following, but if it doesn’t, it should. While it has a slight Evil Dead vibe, small cabin in the woods and people dying in crazy ways, it has it’s own originality as well.

Tucker and Dale (Tyler Labine, whom I adore in Deadbeat and Reaper) are friends who go up to Tucker’s cabin to fix it up. On their way up, they run into some college kids who instantly judge them as being hillbillies. While Dale wants the kids to like them, Tucker could care less. They continue their way up to the cabin, and upon seeing it, the audience gets an instant creepy vibe, but Tucker and Dale are ecstatic to have a get-away home.

While Dale and Tucker are checking out the cabin, Chad tells his friends a story about a Memorial Day Massacre, and the hillbillies who did all the killing. Through things we see in the cabin, the audience realizes that must have been where they lived.

All of the kids just want to have a good time, except for Chad, who just seems a bit off, and wants to start some stuff with Tucker and Dale. The kids decide to go for a skinny dip later that evening, and one of the women falls into the lake and hits her head. Dale saves her and they bring her back to the cabin. This is where the fun begins.

In a constant stream of miscommunication between the kids and Tucker and Dale, one accidental death leads to more, and finally an all out assault between the two groups. The deaths just keep getting crazier, and the final reveal, isn’t shocking but it’s amusing.

I highly recommend this one if you enjoy the Evil Dead or Shaun of the Dead.