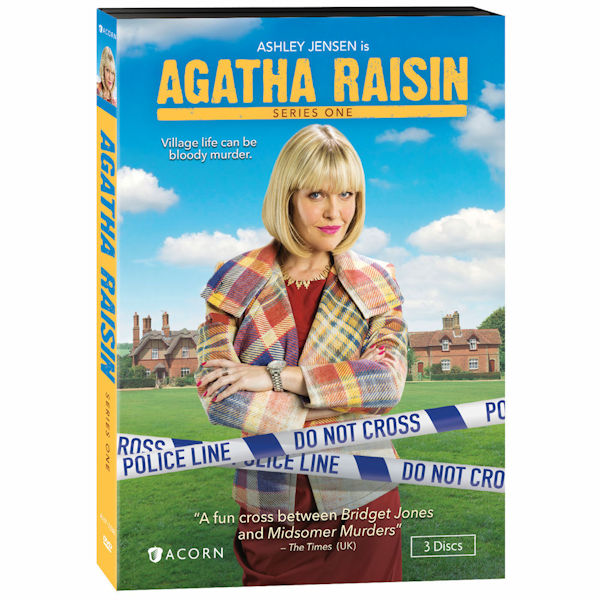 Catastrophe’s Ashley Jensen stars in this quintessentially British village mystery based on the bestselling books by M.C. Beaton. A powerful London PR exec burnt out on office politics, Agatha Raisin jumps at the chance to retire early to a picturesque village in the Cotswolds. But life has other plans, and Agatha soon finds a second career as an amateur detective investigating mischief, mayhem, and murder her deceptively quaint town.

Not having read any of the Agatha Raisin cozies by M.C. Beaton (and there are over 25), I came into the show without any preconceived notions. Perhaps if I had, I would be more persnickety about what the characters looked like, or if they were more humorous in the books.

I did really enjoy the shows, which reminded me a bit of Rosemary and Thyme. Although I liked it, and will watch future seasons, it didn’t grab me enough to start reading the books. Mainly because having seen these, I would think it would spoil the books because I already would know who was the killer.

Agatha is a legend in the PR world, who knows how to work the system to get whatever her clients want. But when she moves to the quaint village, she is completely out of her realm. In the very first episode she enters a quiche making contest thinking she will wow the villagers and make  lots of new friends. One huge problem though, she doesn’t cook. So she buys a quiche, and things go downhill very quickly. Not only does someone get poisoned, but it is found out that she cheated.

She takes it upon herself to find out what really happened, and to try and get some of the villagers to be more friendly towards her. But anyone who’s ever lived in a small town knows that it can take years, even decades, before someone new is accepted into the community.

The rest of the episodes continue with Agatha solving more mysteries with the help of her housekeeper (who I think is adorable, and I want a friend like her), DCI Wong (who has a crush on Agatha, who is older than him), and various others people from the village. Agatha’s love life ebbs and flows through the episodes.

And although I’m not into shoes, Agatha’s were amazing, as well as her outfits. I found myself looking forward to seeing what she would be wearing. All in all, I enjoyed the first season very much, and will watch any more that are made.