I am Not a Serial Killer : Movie Review 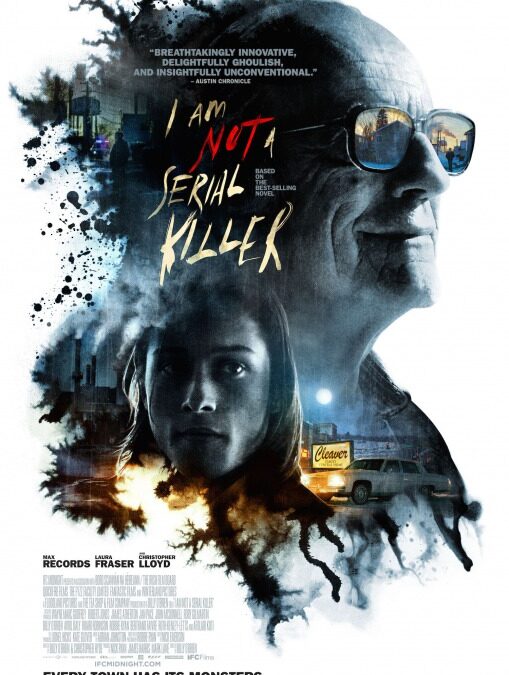 Every town has its monster. This is the story of John Wayne Cleaver. While no stranger to death–having spent much of his time at a funeral home where his mother works–John’s homicidal tendencies are anything but mere teen angst. He uses self-imposed rules to keep them at bay but when a real monster turns up in town, harvesting the organs of its victims, John’s demons prove too strong to ignore.

I read the first three books in the John Cleaver series by Dan Wells, and really enjoyed them. I didn’t realize there are six until I started doing a bit of research for this review. I will definitely be checking them out.

This movie was close to the first book, but there were four big differences. In the book you were able to read more about what was going on in John’s mind. While Max Records did a great job showing emotions (or non-emotions) with his face, to me it was still lacking because we couldn’t know all that he was thinking.

The next was with Brooke. In the book John is obsessed with her, in such a way that it is very creepy and you actually think he will kill her. But in the movie, it seemed more like Brooke was obsessed with John. The scene where he is watching her through the window just didn’t have the same effect that it did in the book.

Next, and it’s been awhile since I read the book, but I seem to remember that his mom was more understanding of him and his tendencies. In the movie when the psychiatrist tells her, she freaks out and doesn’t want him down in the embalming room with her any more. I don’t remember her doing this in the book, and she actually had him join her because she knew it was a way for him to temper some of his urges.

And the last part that was really different was how the book ended. It was actually more climatic than in the movie. The killer who was violently fighting for his life in the book, just kind of lost all his fight in the movie.

But even with these differences you should still watch this one, but maybe read the book afterwards so you get more out of it.