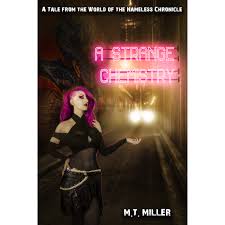 Aaand, stepping into the center ring!

—the streak of color with the dirty mouth!

—the pummeling you never saw coming!

Or so it used to be. Made into a killing machine by a unique combination of drugs, Rush has been living like a force of nature, always moving forward, never once looking back.

But after helping overthrow the city’s Management, Rush is bored. Bored. Luckily (or not), a conspiracy is brewing in the city of Babylon, threatening everything Rush ever fought for. Dragged into its gaping jaws, Rush is forced to fight for her fix and her freedom, as well as her life.

And she wouldn’t have it any other way.

M.T. Miller continues on in this dystopian world with an intense look at one of the main characters, Rush. I always appreciate a strong female lead, and Miller does an excellent job writing this character as such. What makes her even more appealing and real, is her human flaws, of which she has many. The biggest one being an addiction to a body chemistry altering drug. Miller doesn’t hold back in his writing when he shows what it’s like to be addicted, and the withdrawal that happens when you stop receiving it.

It was also interesting to learn more about where Rush came from, and how she ended up turning into an enhanced human with a drug dependency. As with the two previous books in this series, this one if filled with lots of action and violence. I am looking forward to reading what Miller has in store next for the Nameless Chronicles, whether it be a full length novel, or another novella.