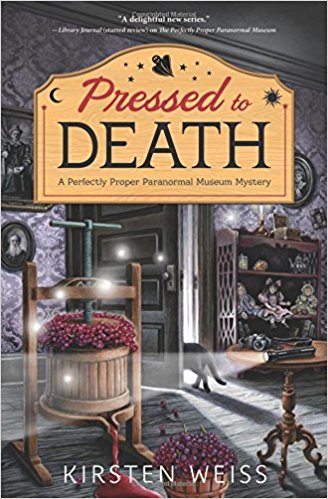 Paranormal museum owner Maddie Kosloski has the perfect exhibit for the harvest festival―a haunted grape press. But when she’s accused of stealing the press, and her accuser is murdered, all eyes turn to Maddie. Knowing the perils of amateur sleuthing as she does, Maddie is reluctant to get involved . . . until her mother insists she investigate.

Does her mom have a secret agenda? Or is she somehow connected to the murder? Facing down danger and her own overactive imagination, Maddie must unearth the killer before she becomes the next ghost to haunt her museum.

In the first book, The Perfectly Proper Paranormal Museum, Kirsten Weiss lightly touched upon the paranormal aspect of the items in the museum, but this book saw her digging deeper into them, which I really enjoyed. And what is fun is there is two mysteries in each book, the main one that is occurring and Maddie is investigating, as well as one that is related to one of the objects and happened years ago. So two mysteries for the price of one.

Weiss continues to develop the characters in this book, which is always enjoyable. I even liked how she had Maddie and Mason’s relationship progress. Although some may not be big fans, I think it’s great how it opens up even more options in the future.

The one relationship that gave me a bit of pause though, is the one between Maddie and Det. Hammer. I know some people are just horrible people. But it was hard for me to get past the way Det. Hammer unprofessionally treated Maddie in front of other people, including her co-workers. Everyone was just like, “Oh, well. That’s just how Det. Hammer is.” I really had to stretch my imagination that no one would call her on it.

I hope to see even more paranormal presence in future books, and am looking forward to reading book three in the series.