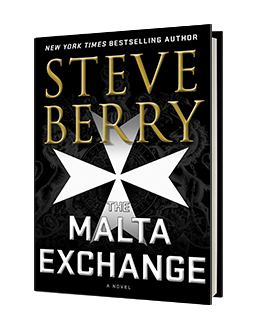 “The pope is dead. A conclave to select his replacement is about to begin. Cardinals are beginning to arrive at the Vatican, but one has fled Rome for Malta in search of a document that dates back to the 4th century and Constantine the Great.

Former Justice Department operative, Cotton Malone, is at Lake Como, Italy, on the trail of legendary letters between Winston Churchill and Benito Mussolini that disappeared in 1945 and could re-write history. But someone else seems to be after the same letters and, when Malone obtains then loses them, he’s plunged into a hunt that draws the attention of the legendary Knights of Malta.The knights have existed for over nine hundred years, the only warrior-monks to survive into modern times. Now they are a global humanitarian organization, but within their ranks lurks trouble ― the Secreti ― an ancient sect intent on affecting the coming papal conclave. With the help of Magellan Billet agent Luke Daniels, Malone races the rogue cardinal, the knights, the Secreti, and the clock to find what has been lost for centuries. The final confrontation culminates behind the walls of the Vatican where the election of the next pope hangs in the balance.” Amazon

I checked my website (kheniadis.com) and it looks like I’ve never reviewed a Steve Berry book, even though I’ve read 10 in the Cotton Malone series. The only reason I can come up with is because they are such a fast read, that by the time I think of it, I’ve already read another book, and am totally lazy, and don’t want to go back and write a review. To which I say, “Shame on me!” Berry is such a wonderful writer, that I should write reviews to let others know about this great series.

Whenever people at the library ask me what they should read, I ask them what they have read that they enjoyed. If they mention, Dan Brown, then I always tell them that they must read Steve Berry. And it’s totally sexist, but if it’s a guy, I will mention Berry. I told my step-dad about this series, and he’s read them all, and has really enjoyed them.

What I enjoy about the Cotton Malone series is the great action scenes, the fast pacing, and how Berry incorporates historical fact with fiction. In this book almost all of the historical references are real, with only a few made up to help solidify the story. If history textbooks were written like this, kids in school would love to learn. If I was a teacher, I would have the kids read one of Berry’s books, and then the textbook on the same subject to fill in anything else.

Since Berry does such in depth research into whatever topic he’s writing about, and often has visited the places, the detail he gives to the scenes are amazing. There will be some books where I skim through scenes because the scenery and architectural descriptions are either not good, or so lengthy and boring, but never Berry’s books. His depictions of the architect and surrounding scenery is amazing.

The only thing that pulled me out of the story was when Luke Daniels, agent for the good guys, started thinking about another of the characters romantically. The scenes were written well, but I just wanted to get back to the action.

If you couldn’t guess already, I highly recommend this book. And if you haven’t been reading the Cotton Malone series, you may want to start with the first book, The Templar Legacy.