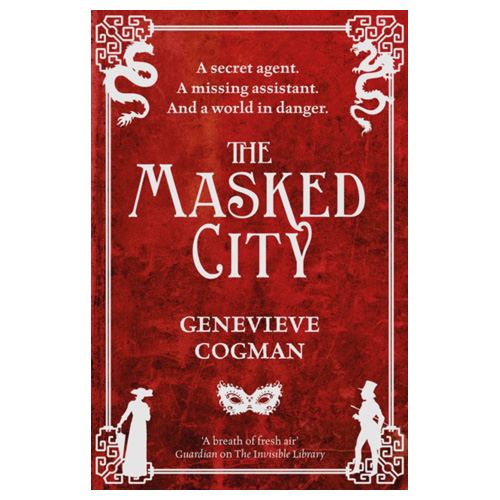 Working in an alternate version of Victorian London, Librarian-spy Irene has settled into a routine, collecting important fiction for the mysterious Library and blending in nicely with the local culture. But when her apprentice, Kai—a dragon of royal descent—is kidnapped by the Fae, her carefully crafted undercover operation begins to crumble.

Kai’s abduction could incite a conflict between the forces of chaos and order that would devastate all worlds and all dimensions. To keep humanity from getting caught in the crossfire, Irene will have to team up with a local Fae leader to travel deep into a version of Venice filled with dark magic, strange coincidences, and a perpetual celebration of Carnival—and save her friend before he becomes the first casualty of a catastrophic war.

But navigating the tumultuous landscape of Fae politics will take more than Irene’s book-smarts and fast-talking—to ward off Armageddon, she might have to sacrifice everything she holds dear….”

Cogman did a fantastic job, once again, expanding on the fantasy world, she began in book one of the Invisible Library series.  As I mentioned before, touches of steampunk, and the way she set up the series means she can write about whatever genre she wants in future books, and it will fit in perfectly. And the way she ended this one, made me excited to see how the series continues in book three.

She developed her characters very well in the first, book and we continue to get to know them even better in this one. Cogman also brings in new characters that have as much depth as already familiar characters. I was so happy that she was able to expand on Kai’s character. I’ve always enjoyed stories with dragons, and this one does not disappoint! And she once again, does a fabulous job in describing the architecture and sense of place in an alternate Venice.

I do appreciate the main character, Irene’s, level-headedness. It’s a nice break from main characters who are ditzy. But with her steadfastness, comes a character who acts slowly. Whether it been in situations where she needs to help someone, or with the budding romance. While it was okay for me in book two, I hope Cogman speeds it up with the next book.

There is also a central mystery that runs throughout the book, and Cogman does a terrific job of dropping little hints along the way. I am looking forward to the next book in the series, The Burning Page, and seeing how Cogman continues to develop the universe and characters.