Ain’t She a Peach by Molly Harper : Book Review 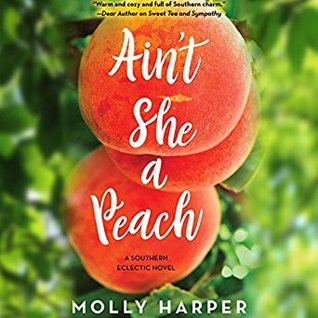 Title: Ain’t She a Peach

“Frankie McCready talks to dead people. Not like a ghost whisperer or anything—but it seems rude to embalm them and not at least say hello.

Fortunately, at the McCready Family Funeral Home & Bait Shop, Frankie’s eccentricities fit right in. Lake Sackett’s embalmer and county coroner, Frankie’s goth styling and passion for nerd culture mean she’s not your typical Southern girl, but the McCreadys are hardly your typical Southern family. Led by Great-Aunt Tootie, the gambling, boozing, dog-collecting matriarch of the family, everyone looks out for one another—which usually means getting up in everyone else’s business.

Maybe that’s why Frankie is so fascinated by new sheriff Eric Linden…a recent transplant from Atlanta, he sees a homicide in every hunting accident or boat crash, which seems a little paranoid for this sleepy tourist town. What’s he so worried about? And what kind of cop can get a job with the Atlanta PD but can’t stand to look at a dead body?

Frankie has other questions that need answering first—namely, who’s behind the recent break-in attempts at the funeral home, and how can she stop them? This one really does seem like a job for the sheriff—and as Frankie and Eric do their best Scooby-Doo impressions to catch their man, they get closer to spilling some secrets they thought were buried forever.” Amazon

Loved the first full book in the Southern Eclectic series, Sweet Tea and Sympathy. This series appears to have a novella, then a full book, novella, repeat, so Ain’t She a Peach is the second full book in this series. You don’t need to read the novellas, but I’m sure they would only enhance your enjoyment of the series.

In this book we get to know Frankie, Margot, and the rest of the cousins even more. Duff, the only male cousin, really amused me in this book, especially when he had to be included in a girl’s talk. We also get to know the Aunts and Uncles more, but there isn’t a lot with their grandma, who is a riot. Maybe they’ll be more of her in the next book in the series, Gimme Some Sugar.

The romance in this one was sexy and sassy. I had a small issue with their relationship in regards to some of the police procedurals. It’s a small town, and fiction, but the way the Sheriff, Eric, handled some of the situations with break-ins at the mortuary, was a bit far fetched for me. But it did not ruin the story.

I didn’t laugh as much as I did with Sweet Tea and Sympathy, but I still chuckled a couple of times, and loved the wackiness of the end funeral home scene. Another fun book in the series, and I’m looking forward to Gimme Some Sugar.