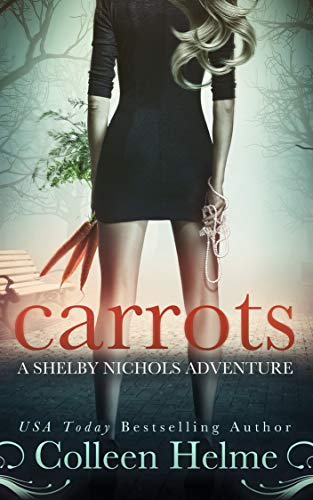 “Stopping at the grocery store for some carrots shouldn’t be dangerous, but in Shelby’s case, it changes her life forever. During a bank robbery, she is caught in the cross-fire and grazed by a bullet to the head, leaving her with the crazy ability to read minds.

Not only is she hearing what everyone thinks about her, but the gunman who shot her is out to silence her forever. In her fight to stay alive she is saved from certain death by a handsome hitman with ties to organized crime. This pulls Shelby even deeper into danger, where knowing someone’s thoughts can not only hurt her feelings, but get her killed.” Amazon

I was drawn to this book because of the title and the cover art. It intrigued me, and after reading the synopsis, I thought I would give it a go. And I am so glad I did. This is a fabulous beginning to the Shelby Nichols Mystery series!

The one ability I would never want would be to read people’s minds, but Shelby copes the best she can, and actually tries to help others. Although she constantly digs herself deeper, that is the fun of this book.

I can see how some don’t like that she’s married and seems to be attracted to two other men, but I’m enjoying it. Just because you’re married doesn’t mean you can’t flirt, and if some of the sexual tension she feels for “Dimples”, the detective , or, Ramos, the assassin, brings some fun sexcapades into her marriage, more power to her.

Since this is the first book in the series, none of the characters were really developed, and I look forward to getting to know them more, especially Uncle Joey, Ramos, and Shelby.

This is a fast paced book, with lots of thrills, laughs, and some unbelievable situations, that just add to the fun of the story. Others have likened it to the Stephanie Plum series, and Shelby to Sookie Stackhouse, since they both have mind reading abilities. I can definitely see the comparisons, so if you like either of those series, you’ll want to check out Shelby Nichols. Even if you don’t like those series, you should still check her out. I know I’ll be reading the next one, Fast Money, in the very near future.