A Crafter Hooks a Killer by Holly Quinn : Book Review 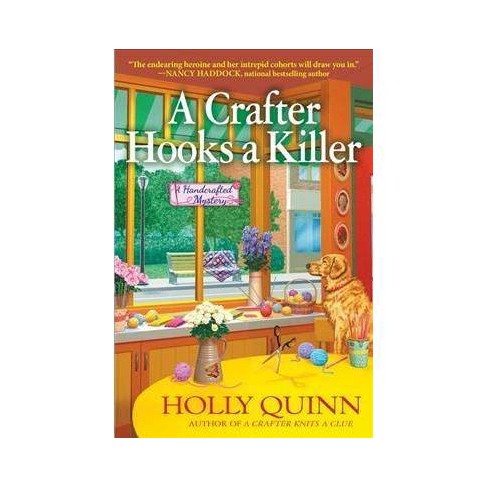 “Samantha “Sammy” Kane is settling into her new life in idyllic Heartsford, Wisconsin, running her late friend Kate Allen’s craft shop, Community Craft when one early June day, bestselling crochet author Jane Johnson visits Heartsford. Captivated by Community Craft, Jane devotes a chapter in her new book, Behind the Seams, to the store. Sammy is honored, though satisfaction quickly turns to shock when she finds Jane strangled to death―her cold hands clutching a copy of her most recently published book, with the words “THE END” raggedly scratched into the cover.

Heavens to Etsy! Not only must Sammy contend with the author’s inauspicious demise, she has to untie some knotty details from her own past. It turns out Kate’s death was not what it seemed, and instead somehow hooked to Jane Johnson’s demise. Handsome Detective Liam Nash is on the “skein”, more than happy to see the shop owner again, if less than enamored by her sleuthing interventions. But this was Sammy’s best friend―she has to know.

Fortunately, Sammy has a “lace” in the hole. As a child, she formed the S.H.E. detective team with her cousin, Heidi, and her sister, Ellie. Having already reconstituted their partnership, the S.H.E. team searches for a pattern behind the latest death. As the case starts to unravel, will Sammy and team be able to sidestep Liam quick enough to stitch together the clues?” Amazon

When I saw this one available on NetGalley, I had to give it a go, being from Wisconsin. And Holly Quinn did not disappoint with the composition of her scenes, making me feel like I was in one of the various small towns in Wisconsin. She was also spot on with how good the cheese is here, compared to most other states!

Quinn had excellent dialogue between the characters, keeping it to how real people talk, and adding in some of the states colloquialisms. Her characters were also well developed. Even if you haven’t read the first book in the Handcrafted Mystery series, A Crafter Knits a Clue, she had all the characters fleshed out enough that you weren’t questioning what had happened in the first book.

Sammy’s relationship with the detective was a bit more love/hate than love/love, which is common in other cozy mysteries. At times it was a bit much for me, how quickly she became mad with the detective. But whenever I have strong emotions towards a character, I feel as if the author is doing an excellent job writing them. It’s just if this was real life, perhaps Sammy would not be someone I would hang out with all the time.

The mystery itself was well written, with lots of clues and some misdirects. I was convinced it was one character until close to the end of the book. And with all of the cozies I’ve read, this doesn’t happen too often anymore.

I would definitely recommend this book, and am excited to see where Quinn takes this series.