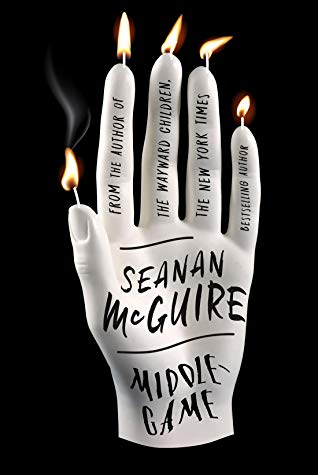 “Meet Roger. Skilled with words, languages come easily to him. He instinctively understands how the world works through the power of story.

Meet Dodger, his twin. Numbers are her world, her obsession, her everything. All she understands, she does so through the power of math.

Meet Reed, skilled in the alchemical arts like his progenitor before him. Reed created Dodger and her brother. He’s not their father. Not quite. But he has a plan: to raise the twins to the highest power, to ascend with them and claim their authority as his own.

It has been a long time since I’ve read a book that makes me say, “Damn!” when I finish it. And even longer since I’ve read one that takes me a week to process it. But Middlegame by Seanan McGuire, had me doing both.

I first started reading about October Daye, which is an epic fantasy series. McGuire’s world building is outstanding in this series. The next series I found was her InCryptid’s. This one is more urban fantasy that encompasses a family with different skills who help to keep safe creatures that are suggested to possibly be real, but have not yet been proven scienctifically. Think Yetis or mermaids.

Now for the fun part where I basically tell you nothing about the book, because I don’t want to spoil any of it!

It’s about alchemy, time travel, reincarnation, and trying to do right by yourself and others. It’s about familes, love, hate, and knowing who to trust even if it’s just yourself. It’s about good, evil, grey areas, and finding out life isn’t what you believed it to be. It’s all of this, and so much more.

I truly feel bad giving you so little, but if you trust me and read the book, it can give you so much to ponder, enjoy, embrace, and question. Just like an amazing book should.