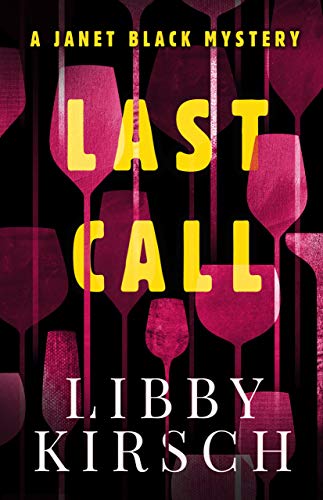 “Unfazed after finding a body behind the Dumpster of her bar, Janet Black is ready for business as usual until police start eyeing her boyfriend as the possible killer. When the victim’s teetotaling daughter decides to take up residence in the corner booth until the murderer is caught, Janet is forced to get involved.

She’d rather be dealing with unruly customers, but instead Janet reluctantly mounts her own investigation to find out if the dead man’s complicated past could have anything to do with his death, whether an unreliable employee’s absence is mere coincidence, and why police are purposefully feeding her bad information about the case.” Amazon

This one has potential, but I don’t know if it’s enough for me to read the next book in the series, Last Minute. I liked the idea of the series taking place in a bar, because I think it has a lot of potential. There are so many different characters that can inhabit this world. There’s also a lot of conceivable drink recipe competitions, bar fights, and theme night mishaps, that could add some humor to this story.

I think the two things that put me off were how unlikable Janet was, and I didn’t really like her boyfriend either. I realize Kirsch was using his profession for the reason why he couldn’t communicate with Janet, but it just wasn’t justified enough for me. And I think having a main character, who is at least a little likeable, is pretty important. Especially in the first book in the series!

There’s also the story itself, it just wasn’t fast paced enough. Instead of giving us a detailed description of running around doing errands, but not accomplishing anything, dive deeper into the characters backgrounds and personalities.

And I know in a lot of mysteries, especially cozies, the police are on the stupid side, but I felt they were especially stupid. If you need your detectives that stupid, so your main character can solve the mystery, perhaps the story needs to be reworked.

Some of the characters have a lot of potential, especially the women who work at the bar. I hope Kirsch delves more into their stories. If she does that, adds some more zany bar customers, and tightens up the plot, I think this series could head in the right direction.