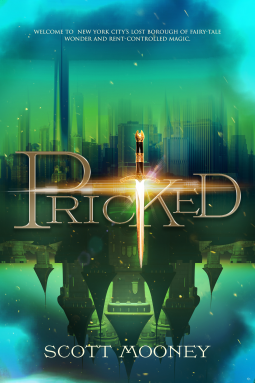 “Briar Pryce has the power to change the emotions of others by handing them a rose. It is a talent that has done surprisingly little for her, besides landing her a dead-end enchantment delivery job and killing any chance she had with her childhood-crush-turned-roommate. Worst of all, her ability might be responsible for getting her best friend transformed into a cat via a cursed muffin basket. Needless to say, Briar is nowhere near happily-ever-after. But that’s just life as a twenty-something in the Poisoned Apple, New York City’s lost borough of fairy-tale wonder and rent-controlled magic.

When Briar reluctantly agrees to help find a princess’s kidnapped boyfriend in exchange for reversing the curse on her friend, she gets the heroic quest she never really wanted. Unfortunately, the life of a noble heroine is not all it’s cracked up­­ to be – the hours blow, and Briar suspects that the Royal family employing her might be evil, Republican, or both. To complete the suckage, a killer smoke magician is stalking Briar as she searches both the Poisoned Apple and Manhattan for the missing boy. As tensions between the Poisoned Apple royalty ignite and civil war looms, Briar must figure out how to write her own happy ending–or she’ll just be ending.” – Amazon

I have a confession to make, when someone asks me who my favorite princess is, (What? No one has ever asked you?!?) I always say Belle, followed closely by Ariel. But, I have always been obsessed with Briar Rose.

My father used to tell me the real Grimm Fairy Tales when I was a kid. Cinderella’s step-sister cutting off her heal, trying to get the glass slipper on. And the princes who scaled the castle walls, trying to get to Sleeping Beauty (aka Briar Rose), becoming blind after having their eyes stabbed out by the rose’s thorns that were growing on the outside walls.

The Briar Rose story always scared me the most for some reason, but fascinated me as well. Maybe it bothered me more because I thought of the princes as nice people and Cinderella’s step-sisters as not so nice. I have dreams about the spinning wheel as well, not so much now, but a lot more when I was younger. Briar is woven deep into my psyche.

So all of that back story leads to me stumbling across Pricked on NetGalley. As soon as I read Briar and then rose in the first sentence of the synopsis, I knew I would be reading it. And I am happy I did since Scott Mooney’s debut novel is excellent.

As with any good fantasy series there has to be in depth world building, and Mooney accomplishes this very well, especially for the first book in what I hope becomes a series. Some fantasy series, while still excellently written, have taken longer to flesh out the worlds. Seanan McGuire’s, October Daye series, is one that comes to mind. Not to say that the first book, Rosemary and Rue, didn’t have fantastic world building, just that McGuire didn’t leave the book feeling as complete as this one. Probably because she already had a series in mind, and had other parts of the world planned for future books.

With, Pricked, even if Mooney only writes this book, I feel like the world is complete, but he still has lots of ways to incorporate even more areas into this world in future books. The village where the commoners live is one area that instantly comes to mind.

The characters are written pretty well, some needing more development than others, but that’s what future books are for! I enjoyed Briar’s sass and realistic outlook on the world. Antoine, the knight/bodyguard, doesn’t seem to say much, but I think there are a lot of layers to him that will be coming out. I do like the strong, silent type. And many of the supporting characters were given distinct personalities as well.

As with a lot of fantasy, this takes place in a short period of time. Because of that, the action scenes usually come hard and fast. I thought Mooney did a great job with the pace of the book and the writing of the action. I didn’t need to pause my reading because something I needed to question if something could be physically done. Although, since this is a world with magic, doing the impossible is possible.

The thing I do question is how this is being marketed. It is in the adult genre, but it reads more YA to me. Not that adults wouldn’t enjoy it too though.

Briar and her roommates are not that far out of high school, in fact a huge story plot is something that happened in high school. And the relationships all feel less mature. Briar even mentions it feel like a pissing match every time Antoine and Cade are in the same room.

Maybe it was decided to be marketed for adults because of the pop culture references? Two that I remember, although there were more, are Alias and Buffy. Maybe teens will know about Buffy because it’s a cult TV show, but I’m thinking not so much on Alias. And the other ones had me smiling, but since I’m not a teen, maybe that was their reasoning?

But I don’t market books, I just read and review them! So in ending my review, I say grab yourself a copy and get to reading.