One Taste Too Many by Debra H. Goldstein : Book Review 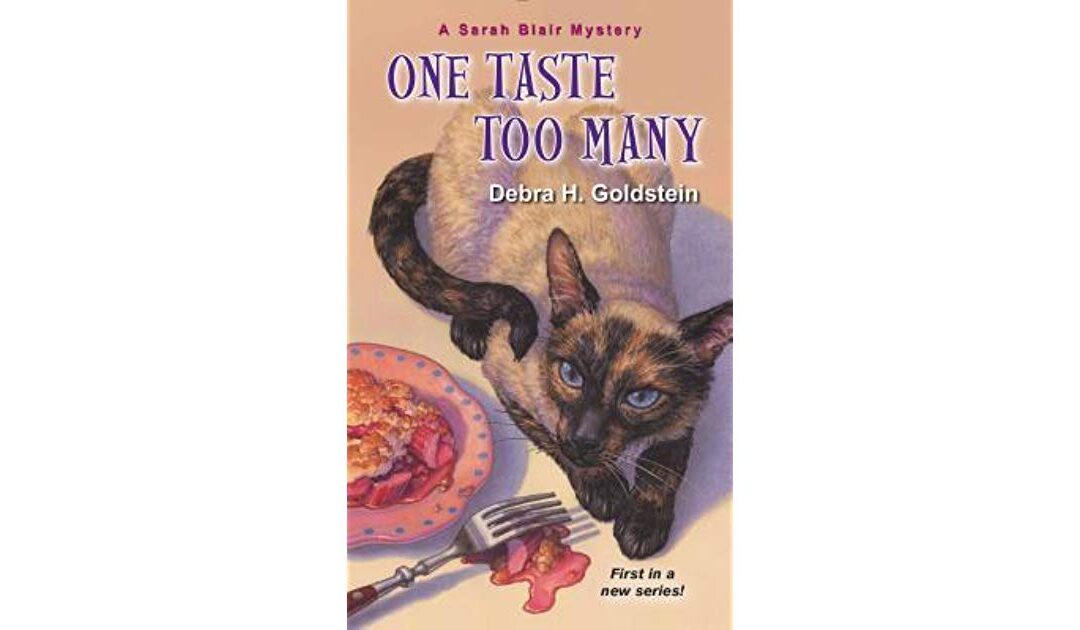 “Married at eighteen, divorced at twenty-eight, Sarah Blair reluctantly swaps her luxury lifestyle for a cramped studio apartment and a law firm receptionist job in the tired hometown she never left. With nothing much to show for the last decade but her feisty Siamese cat, RahRah, and some clumsy domestic skills, she’s the polar opposite of her bubbly twin, Emily—an ambitious chef determined to take her culinary ambitions to the top at a local gourmet restaurant . . .

Sarah knew starting over would be messy. But things fall apart completely when her ex drops dead, seemingly poisoned by Emily’s award-winning rhubarb crisp. Now, with RahRah wanted by the woman who broke up her marriage and Emily wanted by the police for murder, Sarah needs to figure out the right recipe to crack the case before time runs out. Unfortunately, for a gal whose idea of good china is floral paper plates, catching the real killer and living to tell about it could mean facing a fate worse than death—being in the kitchen!” – Amazon

Thank you, Debra H. Goldstein, for writing a cozy mystery where I didn’t know who dunnit until the end. It has been a long time since I’ve read a cozy where I didn’t know the killer, at the latest, ¾ of the way through the book. So yes, I will be reading the next book in the Sarah Blair Mystery series, Two Bites Too Many, coming out September 24, 2019.

My husband and I watch an episode of Top Chef while we eat dinner, so the premise of Sarah and Emily Blair solving a murder while working at a cooking expo with cooking demonstrations was super fun for me. It was a cool new take to a food cozy instead of having it just take place at a restaurant of cafe.

Since most of the book takes place at the cooking convention, Goldstein didn’t have a lot of description about the town, but what she did write, makes me excited to read more about the community in upcoming books.

Goldstein’s characters were really well developed for a first book. In some books I’ll come across a character later on in the book, and don’t remember much, or anything about them. But even the side characters were wonderfully detailed. I’m looking forward to continuing to get to know Sarah, Emily, and the rest of the town even more.

The mystery itself was very well written. Besides not knowing the killer until the end, Goldstein included lots of red herrings and secrets that had me thinking various characters could be the killer. She didn’t leave any flashing clues that let me know what was going on, instead writing more subtle ones that can be easily missed.

And being a judge, Goldstein’s descriptions of the legal contracts and interrogation room scenes had a more powerful presence to them. In other cozy series the scenes are more glossed over, but in One Taste Too Many, it felt more authentic.

Do yourself a favor and get a copy of One Taste Too Many! Let me know in the comments or on social media what is your favorite food cozy mystery series.