The Grip of It by Jac Jemc : Book Review by Scott 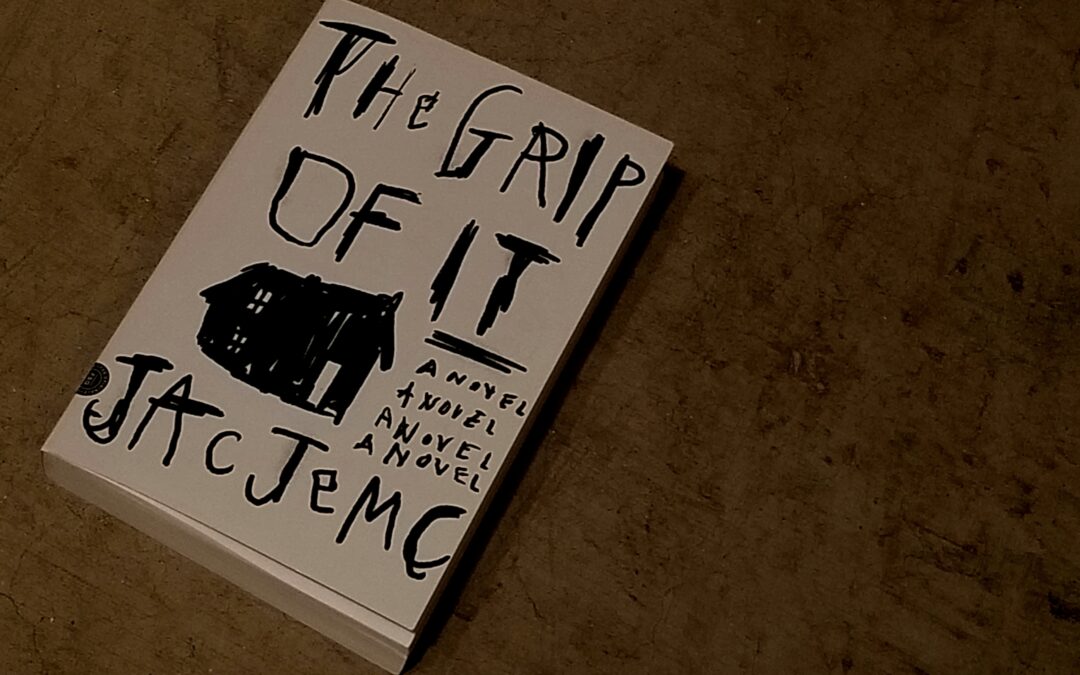 “Finalist for the Chicago Review of Books Fiction Award, Dan Chaon’s Best of 2017 pick in Publishers Weekly, one of Vol. 1 Brooklyn’s Best Books of 2017, a BOMB Magazine “Looking Back on 2017: Literature” Pick, and one of Vulture’s 10 Best Thriller Books of 2017.

Touring their prospective suburban home, Julie and James are stopped by a noise. Deep and vibrating, like throat singing. Ancient, husky, and rasping, but underwater. ‘That’s just the house settling,’ the real estate agent assures them with a smile. He is wrong.

The move―prompted by James’s penchant for gambling and his general inability to keep his impulses in check―is quick and seamless; both Julie and James are happy to start afresh. But this house, which sits between a lake and a forest, has its own plans for the unsuspecting couple. As Julie and James try to establish a sense of normalcy, the home and its surrounding terrain become the locus of increasingly strange happenings. The framework― claustrophobic, riddled with hidden rooms within rooms―becomes unrecognizable, decaying before their eyes. Stains are animated on the wall―contracting, expanding―and map themselves onto Julie’s body in the form of painful, grisly bruises.

Like the house that torments the troubled married couple living within its walls, The Grip of It oozes with palpable terror and skin-prickling dread. Its architect, Jac Jemc, meticulously traces Julie and James’s unsettling journey through the depths of their new home as they fight to free themselves from its crushing grip.” – Amazon

THE GRIP OF IT is such a unique read.  The synopsis was reason enough for me to pick it up.  It’s a haunted house book and who doesn’t love haunted houses?  I, for one, love them! James and Julie are a fairly normal couple, but James is a compulsive gambler trying to rid himself of his compulsions and bad habits.  After opening up to Julie, they escape the city life and purchase a home in a small town. They believe starting over will give them the jump start they need to ditch their old vices and begin something new.  The house they pick has been on the market for quite some time. It’s bank-owned and they love the idea of saving some cash, making it their own and starting life over in this small town atmosphere. Unfortunately, things begin to take a turn for the worse almost immediately and they discover the house of their dreams is a house filled with haunts.  There’s a creepy neighbor across the street, there’s hidden passageways in the house, weird bruises all over Julie’s body, cryptic vandalism popping up on corridors in their home and a host of other things that are well out of the ordinary.

“What is worse?  To be confronted with an obvious horror, or to be haunted by a nerve-ending premonition of what’s ahead.”

I kind of enjoyed the first person perspective and the way that the author wrote each chapter. Other reviewers seemed to shred it from limb to limb. In my opinion, the book was a beautiful dance between the characters of James and Julie.  I really liked that. I found it easy to put myself in their shoes and imagine these scenarios they were forced into at no fault of their own.

The problem with the THE GRIP OF IT is the number of loopholes in its story.  I’m not saying it’s not well written. In my opinion, it was. I didn’t dislike this story at all.  Maybe I wasn’t head over heels in love with it, but I certainly didn’t hate it. My issue was the fact that there were numerous parts of the story that just faded away.  These sentences that went absolutely nowhere drove me a little crazy.

The other problem with the typical haunted house novel is the precarious situation that the author must find themselves in at the end of the novel.  How in the heck are you going to end this book? The options are so limited and it seems so one dimensional to me. The characters are going to move out of the house, the ghosts / entities / weird things are simply going to slow down and stop or perhaps the characters are going to burn down the house and destroy it.  I’m trying to think of other scenarios and let’s face it. It’s a house. It’s a structure. What else are you possibly going to do with this that hasn’t been done so many times before? How else do you want a haunted house novel to end?

I think if you acknowledge that prior to starting THE GRIP OF IT, there’s really no reason to have such a huge letdown when you get to the end of it.  What differentiates THE GRIP OF IT from other stereotypical haunted house novels is the character development between the husband / wife duo of James and Julie.

I looked at reviews of this book on Amazon and Goodreads and I was fairly surprised.  The book was a fairly popular read for so many people. In fact, scattered all over my Instagram newsfeed (@scott.wong), a copy of THE GRIP OF IT can be found on just about every horror / thriller enthusiast that I’m following.  At some point in time, it seems like everyone has this book or has read it or has it on their TBR (to be read) list. The interesting part is the way in which the reviews are broken up almost equally: i.e., 20% gave it 5-stars, 20% gave it 4-stars, 20% gave it 3-stars, etc, etc.

As I mentioned previously, it was not difficult at all to put myself in the shoes of James and Julie. They’re battered and bruised. They’re being tormented and aggravated by God-knows-what. They’re being questioned by the police because of their creepy neighbor across the street that turns up missing.  These people are having a variety of situations thrown at them in a very short period of time. This takes a toll on them, to say the least to the point where James and Julie begin blaming each other. Julie thinks James is playing practical jokes on her. James thinks Julie is slowly going crazy. Julie thinks James isn’t being completely honest with her about the things he’s seeing developed in the house.  It was relatively easy for me to put myself in their shoes and empathize with the situations they are facing. I did find myself rooting for both of them and prayed they would hold it together.

If you don’t think the first person reading perspective is going to be difficult for you, I’d recommend giving this a casual read.  If you’re a fan of darkness and haunted house stories, again, I’d suggest giving it a casual read. I’m not saying move it up to the #1 position on your TBR.  I’m not saying run out and buy this book immediately. What I am saying is that if you want a relatively short book to read to pass the time and your TBR list is short and you just recently purchased an old rundown house that you believe to be haunted, I’d recommend it.

I liked this book. I’m not going to tell you that it WOW’d me or that I was blown away. I wasn’t. I was, however, entertained enough to continue turning the pages night after night until I finished it. I didn’t struggle with the book at any point in time like a few reviewers seemed to indicate and based on that, I’m giving it a solid 3-star review.