Ink and Bone by Lisa Unger : Book Review by Scott 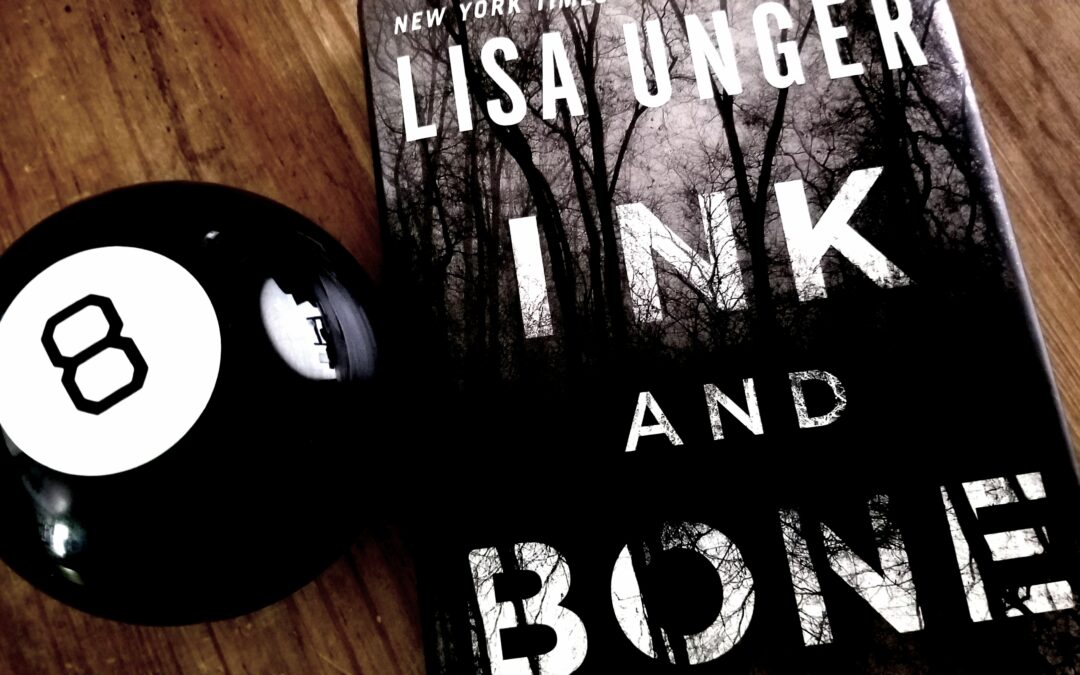 “Twenty-year-old Finley Montgomery is rarely alone. Visited by people whom others can’t see and haunted by prophetic dreams she has never been able to control or understand, Finley is terrified by the things that happen to her. When Finley’s abilities start to become too strong for her to handle–and even the roar of her motorcycle or another dazzling tattoo can’t drown out the voices–she turns to the only person she knows who can help her: her grandmother Eloise Montgomery, a renowned psychic living in The Hollows, New York.

Merri Gleason is a woman at the end of her tether after a ten-month-long search for her missing daughter, Abbey. With almost every hope exhausted, she resorts to hiring Jones Cooper, a detective who sometimes works with psychic Eloise Montgomery. Merri’s not a believer, but she’s just desperate enough to go down that road, praying that she’s not too late. Time, she knows, is running out.

As a harsh white winter moves into The Hollows, Finley and Eloise are drawn into the investigation, which proves to have much more at stake than even the fate of a missing girl. As Finley digs deeper into the town and its endless layers, she is forced to examine the past, even as she tries to look into the future. Only one thing is clear: The Hollows gets what it wants, no matter what.” – Amazon

INK AND BONE is a crime thriller / psychological thriller about Finley Montgomery.  She’s a 20-year old college student from Seattle now living in The Hollows. Finley has relocated to The Hollows to live with her grandmother, Eloise.  Finley has some strange psychic abilities which she has inherited from her mother’s side of the family and her grandmother, Eloise, is also a psychic. She has come to live with her grandmother due to the strained relationship with her own mother and also wants to learn as much as she can about her powers from Eloise.  Her grandmother has been using her psychic capability to assist a local detective, Jones Cooper with varying criminal cases. Detective Cooper catches his next case involving Abbey Gleason, a missing girl who was abducted over a year ago. Eloise hands the reins to Finley and allows her to hone her psychic skills while assisting the detective with Abbey’s case.

“It takes a big person to accept what they can’t intellectualize.”

INK AND BONE was my first Lisa Unger book.  I really enjoyed this book. I liked it a lot.  I didn’t love it. It definitely kept my interest and I had absolutely no problems turning the pages each day.  There’s more than enough going on to keep my interest firmly planted in this book. In fact, that was actually part of the problem for me, personally.  There is A LOT going on in this book. There’s the main plot and then there’s a sub-plot and there’s another sub-plot within that sub-plot and each sub-plot has its own characters.  Once I got a feel for each of the characters and what was ultimately happening, I followed along with no issues. For such a simplified main plot, there was just a tremendous amount of activity in this book.  To be fair, it is my understanding that The Hollows (where the book is based) is a location that the author has used in other titles. I didn’t ever feel as though I was missing out on information shared in a previous book, but I do think it’s worth mentioning.

The other [minor] gripe I had with INK AND BONE was the way in which ALL these things were happening within varying sub-plots and they all magically came together wrapped up with a pretty red bow at the tail end of the book.  Not even in the world of fiction are all of those things so picture perfect. I just didn’t buy it. I wanted to see some mayhem, some disgust, some negativity and none of it happened. Everyone lived happily ever after and that’s not a spoiler by a long shot, but I think you catch my drift. Characters A,B,C,D all come together at the end of the book and every problem is magically solved.  All of this strife and heartache and horrible problems and I just wanted there to be more of a sense of realism. I think the story sort of lost some of that at the end. There was this gigantic momentum at the end of the book and these major things just happened in a period of a few short sentences. That was my take on it, anyway.

“You cannot hide in snow

No matter where you go

You leave a trail behind

That anyone can find”

I hope that didn’t sound too harsh.  I honestly enjoyed this book from start to finish!  I really did. I really enjoyed the relatively fast pace and the amount of detail and  foreshadowing with each character. There’s a certain amount of depth that is presented with each character in the book regardless of how small their piece of the story seemed to be.  Despite the cliche of a psychic assisting law enforcement which has been done countless times in various books, TV and film, I never lost interest.

The story had no issues holding my attention from start to finish.  The story didn’t resonate with me at the end of the day. I didn’t find myself terribly connected to any of the characters. I didn’t find myself wondering about Finley at work. All of that is perfectly OK. I was entertained and that’s all that matters.  Based on that, I’m giving it a solid 4-star review. I want to pick up another Lisa Unger book at some point in time and explore more of the eerie, spooky setting known as The Hollows. Have you read INK AND BONE? I’d love to hear your thoughts!