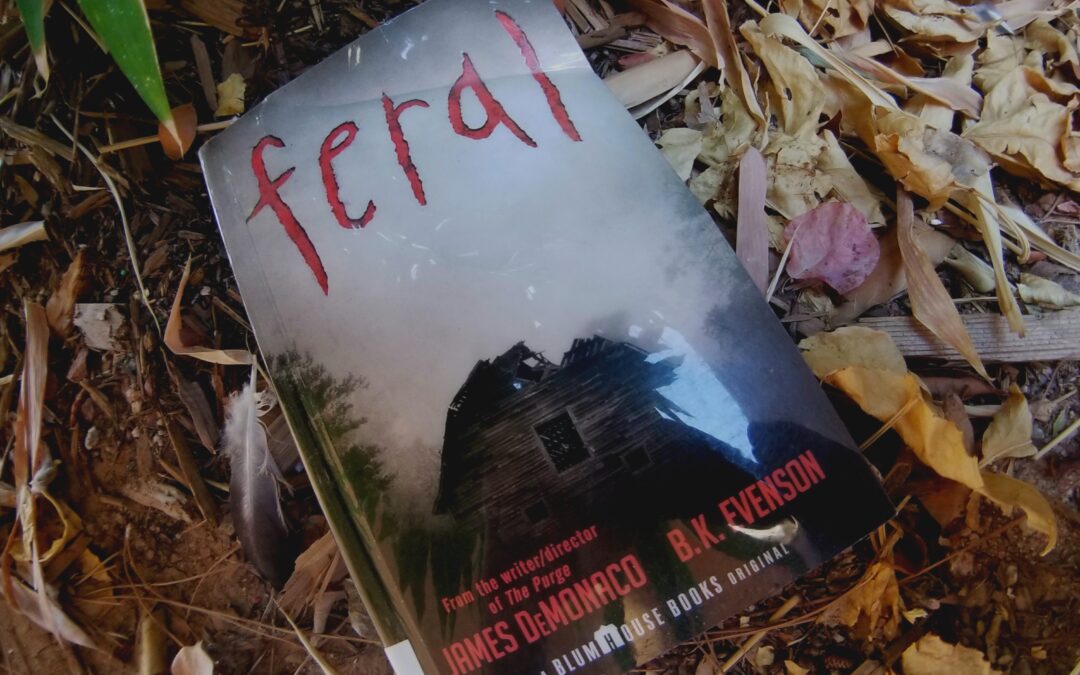 “From James DeMonaco, the writer/director of The Purge film franchise, comes the provocative and terrifying last stand of a lone outpost of women in the wake of a deadly pandemic.

Allie Hilts was still in high school when a fire at a top-secret research facility released an air-borne pathogen that quickly spread to every male on the planet, killing most. Allie witnessed every man she ever knew be consumed by fearsome symptoms: scorching fevers and internal bleeding, madness and uncontrollable violence. The world crumbled around her. No man was spared, and the few survivors were irrevocably changed. They became disturbingly strong, aggressive, and ferocious. Feral.

Three years later, Allie has joined a group of hardened survivors in an isolated, walled-in encampment. Outside the guarded walls the ferals roam free, and hunt. Allie has been noticing troubling patterns in the ferals’ movements, and a disturbing number of new faces in the wild. Something catastrophic is brewing on the horizon, and time is running out. The ferals are coming, and there is no stopping them.

I saw a photo of FERAL in the #bookstagram community on Instagram and a couple of things caught my eye on the cover of the book:  James DeMonaco, creator of The Purge, one of my favorite film series of all-time AND Blumhouse Books who is a subsidiary of Blumhouse Productions who produced numerous horror film favorites such as Insidious, Halloween, The Purge and another one of my favorite series, Paranormal Activity.  That was it.  I ordered a used copy that evening.  I’ll preface this by stating that I love apocalyptic stories so I knew this one was going to be a title I’d enjoy.  I don’t want to use the Z-word (zombie) but it’s basically a different kind of undead / zombie book as you could probably tell from the brief synopsis.  Let’s get into it, shall we?

The story opens PRIOR to the apocalypse which I really, really enjoyed seeing with FERAL.  Most of the apocalyptic books and film chuck you right in the middle of the apocalypse and then back track from there.  Not the case with this book which was pleasantly surprising to read! Allie Hilts is a high school student. She’s a great student and a star lacrosse player.  She’s got a mom, dad and a sister, Kim. A thick, black cloud rolls in from a fire that has broke out at Arcon, a research facility and the fire has released a deadly virus.  The virus has affected the male population causing an extremely high fever, internal and external bleeding, aggression, hunger and a myriad of other symptoms which basically turn them feral.  For some reason, the virus is not affecting the female population – only the males. After all hell breaks loose, the timeline fast forwards just a little to Allie as a grown adult trying to keep her and Kim alive and safe from the ferals.  They hold up in a compound with a group of other women making a life as best as they can in this new apocalyptic world. Scavenge, stay alive, kill the ferals, rinse, repeat on normal wash cycle. I don’t want to go into a lot more detail as I don’t like reviews with spoilers and thus, I’m not including any in this review.  Read on, friends!

I thoroughly enjoyed FERAL.  I mean, really, really dug this book and I plowed through it in a few short days.  As I mentioned previously, I am partial to apocalyptic stories, especially when they include feral men hunting anything with a heartbeat!  YESSSSSSSSSS!!! I thought the story was beautifully written with just the right amount of detail and character development. Unlike some, I really liked Allie.  I kept envisioning her as a kick ass Eliza Dushku circa ‘Wrong Turn‘ .  She was an intelligent, extremely strong woman who did her absolute best given the horribly crappy situation she was thrust into.  The book had a beginning, middle and an end and at no point in time did I ever feel lost or confused. The story made sense. It gripped me INSTANTLY and held on until the very end.  I know it sounds like I’m repeating myself so I’m going to stop with the awesome book adjectives while I’m ahead. I’m not purposely being evasive. I just don’t want to give away any spoilers.  There’s a couple of solid ones in this book that had me yelling “WHOA!” like Ted “Theodore” Logan.  [insert air guitar solo here]

You’re probably thinking, but Scott!  If it was so awesome, how come you’re not giving it a 5-star review?  I had one minor gripe with FERAL and that was the writing.  First, as most of you know, I really enjoy books written from a first-person perspective.  Just personal preference, I suppose. The book is written mainly from Allie’s perspective, but each chapter alternates between Allie’s perspective and Kim’s perspective and other women in the compound.  I thought that was really cool and it was interesting to read about the world from the point of view of varying characters. What I DIDN’T enjoy was the way the book alternated frequently between first and third-person writing perspectives.  It was awkward in a sense and it just didn’t seem fluid at times. I didn’t DISLIKE the book because of this, but it was substantial enough that it simply wasn’t a flawless or perfect read for me. This minor gripe aside, I loved FERAL!

As I do with most of my reviews, I hopped online to check out other reviews and what other readers thought about FERAL.  Much to my surprise, it got a few 5-star reviews, a small truckload worth of 4-star reviews and a handful of 1, 2 and 3-star reviews.  A lot of readers seemed to piss and moan that it’s just like every other zombie book written. OK, you know what, then stop reading zombie books.  And stop reading vampire books because there’s always some douche bag trying to drink your blood. And stop reading romance novels because there’s always a couple of people wanting to get in each other’s pants.  And stop reading slasher novels because there’s always some loser running around with a machete. My point being that, yes, it’s a zombie book of sorts. There are people running around infected trying to eat other people and that makes perfect sense to me because basically IT’S A F*CKING ZOMBIE BOOK!  What else do you suppose you’d like to read about in a zombie book? [insert roll eyes emoji here]

On another popular book reviewing site which shall remain unnamed, another reviewer we’ll call Chris is supposedly some kinda genetic engineer.  Chris has studied and spent most of his career working with the X and Y-chromosomes and their genetic make-up. Since Chris typed that on the internet, it must be true.  Chris had major issues with the way the fictitious corporation could cause a fictitious virus which could inevitably lead to this fictitious infection causing men to turn feral.  I have nothing to add to this except I bet Chris is really fun at parties. *psst*  Chris!  Yeah, you!  I need you to s-l-o-w-l-y back away from your electron microscope, put down your Bunsen burner and repeat after me:  FERAL is a horror fiction book.

I’ll close my review by reiterating again that FERAL was a fun read!  If you enjoy apocalyptic books or zombie tales and flesh being torn apart, I can whole-heartedly highly recommend this title!  It was entertaining and fun and gripping! It was scary and suspenseful. It wasn’t all blood and gore either. The storyline was beautifully executed and one that made me enjoy the book even more.  Yeah, some of the sections were stereotypical of the zombie genre, but that was OK by me. It was a solid 4-star review and I can’t wait to read the other titles that Blumhouse has supported!