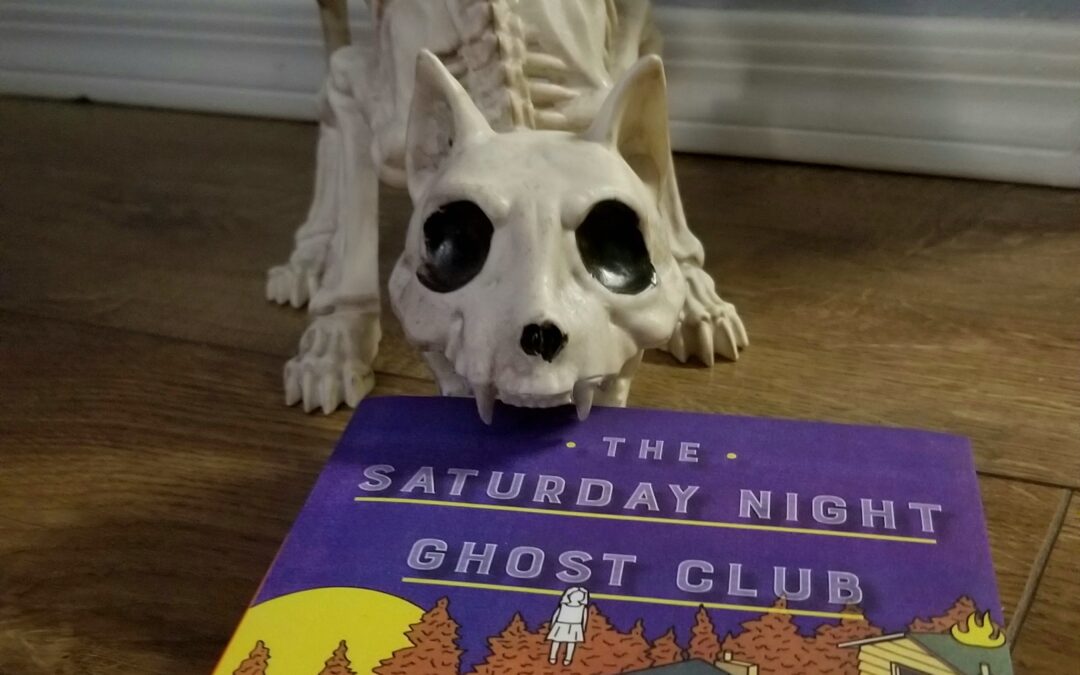 “Growing up in 1980’s Niagara Falls – a seedy but magical, slightly haunted place – Jake Baker spends most of his time with his uncle Calvin, a kind but eccentric enthusiast of occult artifacts and conspiracy theories. The summer Jake turns twelve, he befriends a pair of siblings new to town, and so Calvin decides to initiate them all into the ‘Saturday Night Ghost Club.’ _
_ _
_But as the summer goes on, what begins as a seemingly light-hearted project may ultimately uncover more than any of its members had imagined. With the alternating warmth and sadness of the best coming-of-age stories, The Saturday Night Ghost Club is a note-perfect novel that poignantly examines the haunting mutability of memory and storytelling, as well as the experiences that form the people we become, and establishes Craig Davidson as a remarkable literary talent.” – Amazon

I’ve seen more photos of The Saturday Night Ghost Club on my Instagram newsfeed in the last several months than any other book. I haven’t counted, but it certainly seems that way. I love Saturdays. I love Saturday nights. I love ghosts. I love clubs. Obviously, this book was for me. I read the brief synopsis above and immediately added it to my TBR list. Like the description indicates, it is most definitely a coming of age story told from the point of view of Jake Baker. He’s a quirky kid. He does well in school. He’s not very cool but he doesn’t pretend to be either. He’s just Jake.

The timeline of the book is a brief one told over the course of a summer vacation when Jake turns 12 years old. He spends the bulk of that summer with his Mom’s brother (Jake’s Uncle) Calvin. He’s about as quirky as Jake and you can tell he’s seen a thing or two in his life. He enjoys ghost stories, bizarre oddities and making Jake smile. In the small town where Jake lives, he becomes friends with Billy & Dove Yellowbird. Billy & Dove are siblings and of similar age to Jake. The three of them become thick as thieves. Uncle Calvin invites them to various locations around town where bizarre happenings have occurred in the past and thus, The Saturday Night Ghost Club is born.

“Now I wonder: How often must that occur? A boy comes within an ace of death or disappearance, then returns home and goes to sleep and his parents never suspect a thing.”

I read this book over the course of a few days, although, I could have easily finished it sooner. It was a fairly fast-paced read, but I purposely slowed down and took my time. I absolutely loved and I do mean, loved every single character in this book. Uncle Calvin reminded me of my Mom’s brother, my Uncle Dennis. His mannerisms, his antics, his sense of humor, his odd behavior, the way in which he said such silly, off the wall shit to Jake, but did so in such a serious way. That was my Uncle Dennis. He took me on so many adventures as a child. He was larger than life to me and most definitely one of my heroes growing up. He was a taxidermist and had such bizarre things in his own house. I always found something new to look at or study. All of those things and so much more is why Uncle Calvin’s character reminded me of my Uncle Dennis. I never got to say good-bye to my Uncle Dennis and truth be told, I think about him often. Perhaps that’s why I didn’t want this book to end. I’m Jake. My Uncle Dennis is Uncle Calvin.

The story is a simple one. There aren’t 42 characters with varying dynamics. There aren’t any warped timelines. No one is in a magical time machine. The location remains exactly the same. It starts on Jake’s last day of school and it ends as he returns to school. To be fair, the story does open with Jake as an adult for a very brief moment and it seems as though he’s telling the story of this summer to us, as the readers. Obviously, this was very simple to follow and not at all convoluted. There aren’t any massive flash forwards and flashbacks and flash sideways. I really, really appreciated the simplicity of this story and compared to some that I’ve read as of late, it was a nice change of pace. I like simple.

“…if nobody can prove it didn’t happen, hell, it may as well be true. Never wake the dreamers from their dream.”

I know I’ve not given much information in terms of this story line. The truth is, there are a couple of twists and turns with a not-so-obvious cliffhanger at the end. Based upon that, I really don’t want to give away a lot more information regarding this storyline. The brief synopsis on the back of the book and the first part of my review should be more than enough reason for you to add this to your TBR list. Aside from the obvious, the summer as a young boy is one I remember vividly. Living vicariously through Jake is one that I thoroughly enjoyed. It’s the fact that there’s no school, there’s no responsibility, there’s constant adventure, his first real crush and constantly surrounded by friends and family. It’s that magical time from the last bell on the last day of school before summer vacation starts right up until Labor Day in September. I can’t think of a better time to be a young boy. That non-stop magical feeling is one that Craig Davidson had me feeling from the moment I started this book right up until it ended. And I hated that it ended.

I finished this book last night and I remember closing it. I set it down on the bed and I rested my head against the headboard. I immediately got a lump in my throat and will admit, I got fairly emotional with tears in my eyes. I thought about my Uncle Dennis and the adventures I got to share with him as a young boy. All those magical memories that are in a special place in my heart is one this book captured perfectly for me. All of that happened and all of those emotions came to light immediately simply because I read a book. That’s fucking amazing and I don’t care what anyone says. Words did that. This book did that. How magical is it that an inanimate object filled with words and sentence structures could take me back to a place I had not visited in quite some time? Look me in the eye and tell me that isn’t magic.

With the season of Halloween officially upon us, I’d highly recommend this coming of age story to anyone a fan of the genre. I’ve seen it classified as a YA book which I would tend to agree with. It is not a book of the ‘horror’ genre, although, the moods and ambiance of the story are, indeed, spooky to a certain extent. I’d also like to point out that one of Craig Davidson’s pen names is Nick Cutter who wrote THE TROOP, another 5-star book that I’d highly recommend (and much more R-rated, scary and filled with lot’sa blood & gore!)

THE SATURDAY NIGHT GHOST CLUB is undoubtedly one of my favorite reads thus far and one I will continue to recommend. In fact, it would be perfect for YA’s and adults, alike. It’s especially perfect right now since we’re in the spooky season of the year! Thanks to those of you who let me spin my own personal tale of why this book meant so much to me. I shall dedicate my review to my Uncle Dennis. I remember asking him one time as a kid if we were gonna have fun before setting out on our next adventure, to which he responded, “Does a fat frog fart?” And that, my friends, is my Uncle Dennis and Uncle Calvin in a nutshell. May your October be filled with more treats than tricks!