The Narrator by Norman Prentiss and Michael McBride : Book Review by Scott 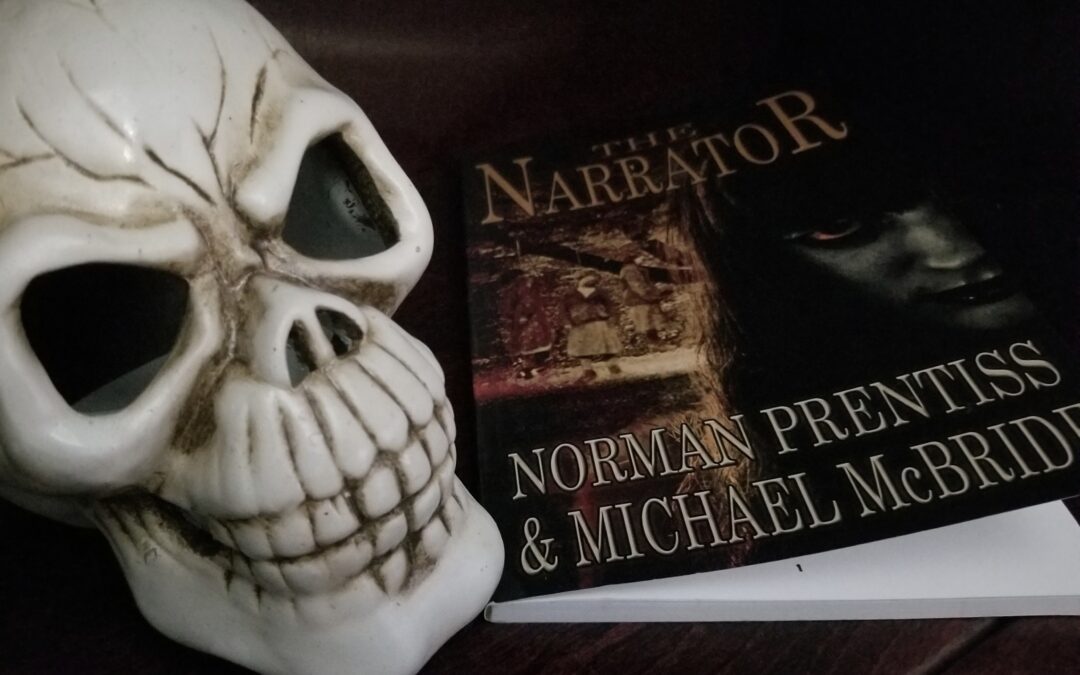 “Critically acclaimed horror scribes Michael McBride and Norman Prentiss team up to bring you this atmospheric tale of a schoolroom descending into madness.

Something is wrong with Julia Linder’s sixth grade class.

One boy’s harmless tendency of getting lost becomes a crippling fog of disorientation. A girl’s mild twitch turns into an obsessive pattern of frightened raps and repetition. The symptoms are spreading and the source seems to be stories that seize upon the children’s deeply seated fears and intensify them exponentially.
How can mere stories change their behavior?

Abbie is a bright girl at the heart of the mystery. The others are inexplicably drawn to her and become increasingly devoted to her with each passing day. But should her classmates trust her? The secrets are locked in tales from the past, where only The Narrator can find them.” – Amazon

Look at that cover art for The Narrator. Read that synopsis and tell me this doesn’t sound like an awesome little novella. It does, right? So, Ms. Linder is a sixth grade teacher. The story starts with little Abbie, the star pupil of her class. Her goody-two-shoes attitude and Eddie Haskell-like antics has most everyone fooled. The only thing Abbie cares about are the books of fiction she loves to read. She jumps ahead in the class lessons, answers as quickly as she can just so she can jump back into the current book she’s reading. Since Abbie loves reading, she seems to be a natural storyteller at recess and lunch. She gathers her fellow classmates around in a circle and scares the absolute crap out of them with her stories. Her classmates almost seem to be deathly afraid of Abbie and their bizarre behaviors are directly linked to the stories being told to them. Ms. Linder becomes quickly aware of Abbie’s less-than-perfect demeanor and springs into action to catch the girl in her shenanigans.

“Teachers were like detectives sometimes. Keep your ears open. Ask the right questions. There’s always a story, if you know how to look for it.”

Damn this story. I had really high hopes for it, too. I love photos of little 9demon children0(https://amzn.to/2ql8gBs) on the cover of books! This one fell short for me, personally. As I mentioned previously, it took me more than halfway through this book to figure out what in the hell was happening. Here’s why: The story opens as you’d expect with Ms. Linder’s classroom as the synopsis suggests. Out of the blue, the next ‘chapter’ starts talking about a sailor and a ship and a spooky woman he’s trying to save and waves crashing and a man almost drowning trying to make it to shore and blah blah blah. I honestly thought there was some kind of a gross error made by the print house. Maybe they inadvertently switched up pages and the chapter I was reading belonged in a different book. No shit. So I read a few pages and thought – OK, that was kinda weird. The next chapter gets back to Ms. Linder’s class and the children. Then out of the blue again, the story switches up and I’m reading something completely different again! This time it’s not about a sailor, but about a woman in a chamber and incessant knocking on a door and there’s a demon and more knocking and more knocking and screaming. I thought again, there are no way these pages about this knocking on the door belongs to this story. WTF does this have to do with poor Ms. Linder and that fake ass Abbie girl? …absolutely nothing.

I finally realized (after some help from this book) that those stories they keep diverting to were the stories that Abbie was reading! Holy shit, what an absolute clusterfuck. Every time the story diverted away from the scene of Ms. Linder and her class, it was so distracting! There was no rhyme nor reason to it and it was terribly confusing. People on Amazon and Goodreads were, like, OMG – this was genius. No. No, it wasn’t. It was terribly confusing, the story lost momentum every 6–8 pages and in my opinion, it certainly didn’t make it more scary.

There are a couple of twists / turns at the end of the book, but it wasn’t enough to save it from the atrocious writing I had to endure. I have not read anything by either of these authors before so I cannot speak to their ‘critical acclaimed’ success. Perhaps I will try another book from each of them. I was surprised to see the number of 4 and 5-star ratings this book received. To be fair, it did seem to get more 1, 2 and 3-star ratings. Needless to say, everyone who didn’t care for the book gave a poor rating because of the major gripe I referenced above.

It looked like such an awesome October read, but I simply didn’t care for it. I will redeem the book by giving it a 2-star rating because when the authors were sticking to the original scenery in the classroom, I actually kind of enjoyed it. After a few pages though, it would start an excerpt from a completely different story and again, it just lost all momentum and in turn, I was losing interest. In fact, I found myself skimming through the vignettes (which we later learn are the stories that Abbie is reading) just so I could get back to the original story which I thought I purchased. I know I’m beating a dead horse right now, but I don’t see how or why anyone would call this “genius”. Imagine reading a romance novel and then the next chapter starting with a random excerpt from Harry Potter. That’s what this book was like. Thankfully, at just 104-pages, it was a fairly short torturous event.

I liked the cover. I especially liked it when the story remained on task in the classroom setting with Abbie and Ms. Linder. I did not care for the flipping back and forth to the random excerpts of Harry Potter. It’s a 2-star novella for me. Unfortunately, this is not one I could recommend even if your TBR was empty.