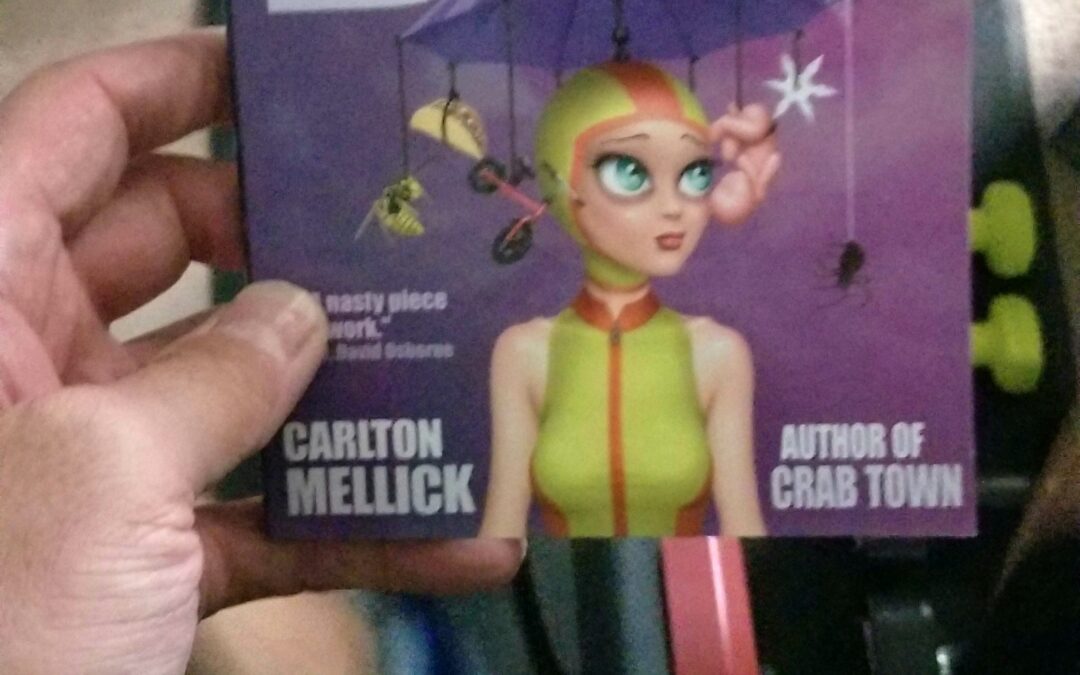 “There is something wrong with Tori Manetti’s new exercise bike. It is made from flesh and bone. It eats and breathes and poops. It was once a billionaire named Darren Oscarson who underwent years of cosmetic surgery to be transformed into a human exercise bike so that he could live out his deepest sexual fantasy. Now Tori is forced to ride him, use him as a normal piece of exercise equipment, no matter how grotesque his appearance.
_ _
Set in a health food dystopia, “Exercise Bike” is an absurd horror tale of domination and submission, power and obedience, desire and desperation, from Wonderland Book Award winner Carlton Mellick III.” – Amazon

Tori Manetti lives in a futuristic place where junk food is outlawed. Binge eating your favorite foods is a thing of the past. You’re allowed 2,000 calories per day and once they’re gone – they’re gone. Unfortunately for her, she has the metabolism of a rabbit and burns more calories than the world she lives in allows her to consume each day. Getting more calories on your calorie card isn’t an easy feat and until Tori can figure out a way to do that, she consumes the wasps that have built a nest in the wall of her apartment. #omnomnom

Cheating the system isn’t a smart move, but she learns that you can get more calories banked on your calorie card by exercising. One of the new high-tech spin bike companies (U-Fit) allows you to insert your calorie card into the console of their spin bikes. The more you pedal, the more calories you bank and Tori, my friends, is starving. The new U-Fit models costs the equivalent of a new Mercedes-Benz, but she learns of a new prototype at the local store. The prototype was once a man named Darren Oscarson whose lifelong dream was to be turned into an exercise bike upon his death. His legs are the pedal cranks, his feet are the pedals. His arms are the handlebars and the rest of his anatomy, well, I’ll let you guess where all of it lands as far as exercise equipment goes.

Tori is allowed to take home this new prototype, but it comes at a cost. She’s forced to sign a contract that she quickly regrets despite the hefty down payment in cash that she’s allowed to take home as a reward for using her new exercise bike. Upon delivery of the bike, Tori is quickly repulsed by the grotesque outline of the bike knowing damn well that it used to be a man. Her contract states that she’s forced to a wear a crotchless one-piece exercise garment when seated on her bike. She must feed it / him and also clean up all of his bodily messes. The thought of going through with all of this disgusts her even more, but she’s soooooooooo hungry!! Does Tori mount the bike and rub her naked womanly parts all over it? Does the bike get aroused? Will she ever again eat the Big Mac she so longingly craves? Grab a copy of EXERCISE BIKE and allow me to introduce you to the next warped vision from Mr. Carlton Mellick III!

“Tori is addicted to eating wasps. She eats them alive, first licking their wings until they are too wet to fly away. Then, one at a time, she puts them in her mouth and sucks on their smooth abdomens until they sting her tongue. It’s like eating the spiciest of chili peppers.”

…and that, my friends is why I love the writing style of this man.

I have yet to be disappointed when I pick up a book by Carlton Mellick III. His writing is funny, it’s horrific and yet, it’s so fucking bizarre that I can’t look away. The train wreck is coming. Chooo choooooo!! And for the life of me, I cannot look away. At 126 pages, this is a relatively quick read easily consumed in one sitting. I still think EVERY TIME WE MEET AT THE DAIRY QUEEN YOUR WHOLE FUCKING FACE EXPLODES is my favorite thus far, but EXERCISE BIKE was good! I chose this one because I do love my spin bike and cycling. The fact that there is an entire horrific novella written around this machine made me squeal with glee when I was thumbing through the author’s catalog.

The story is told from Tori’s point of view and the fact that she’s this amazing hungry, bad ass young lady made me empathize with her throughout the story even more. She’s put through some incredibly horrific and traumatizing situations which made me root for her even more as the reader. I wanted to see her obtain her revenge and enact her vengeance on these bastards! I won’t go into more detail than that, but this fast-paced, incredibly descriptive short read is one I would recommend especially if you’re someone who enjoys exercising, spinning, or cycling! Easily a very strong 4 star review for this one. Again, not my favorite one from Carlton Mellick III thus far, but definitely an original read that I could recommend for anyone who is a fan of his work!