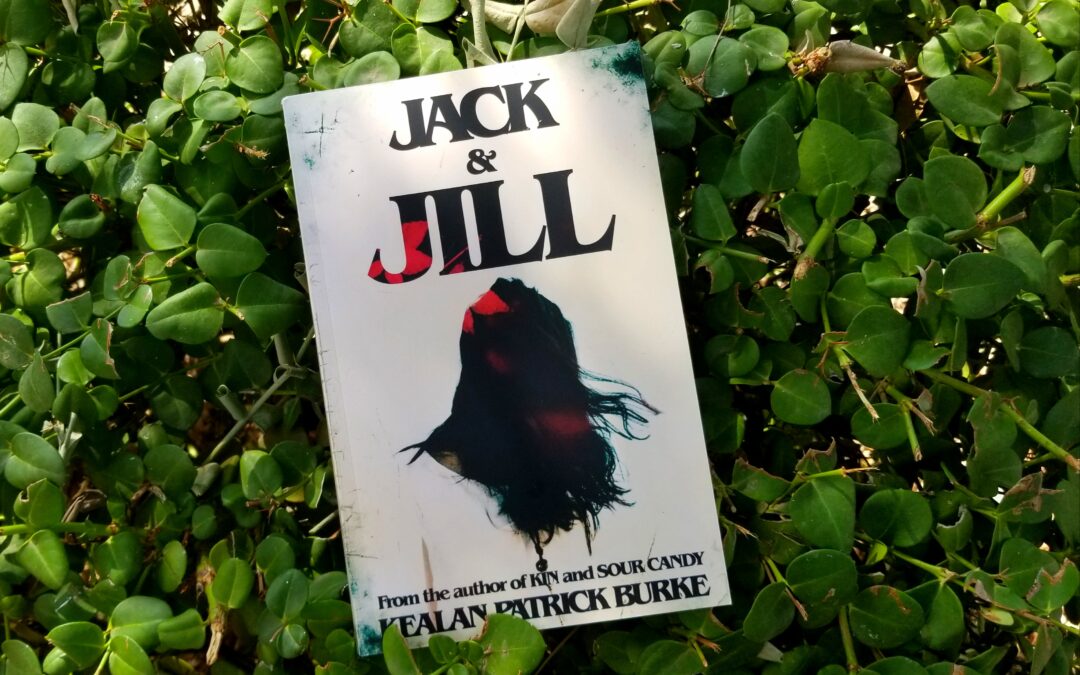 “When they were kids, Gillian and John used to visit the local cemetery every Sunday after church. It was a curious place for children to frequent, but they had their reasons. The main attraction was the lofty hill that separated the cemetery from the elementary school, and the act of tumbling down it like Jack and Jill was a ritualistic escape from the abuse they were suffering at their father’s hands. It was an escape that lasted only until John’s tragic death. _
_ _
_Now, Gillian is all grown up. Married with two children, she has managed over the years to force the trauma of her nightmarish childhood into the darkest recesses of her mind. But lately there are dreams, and in them Gillian sees impossibly vivid reenactments of the horrors she endured as a child. Nightly, she sees John die all over again, only not in the way she remembers. And something else is in those dreams, stalking her, a terrible figure with wire-hanger hands and a plastic bag wrapped around its rotten face. A monster whose reach starts to extend beyond the boundaries of sleep into the waking world, threatening everything Gillian holds dear. A monster she once called Daddy.” – Amazon

The novella opens with Gillian and John rolling down a hill together as brother and sister. They’d lie down in the grass despite their Mother warning them about ruining their Sunday best. Arms at their side at the top of a steep hill before leaning to the downhill and rolling their cares away. This recollection in dreams for Gillian ends and the story picks up in the present day with her current life. Her marriage is in a rotting condition with two children who consistently view her as the bad guy. Her lack of sleep due to the frequent nightmares she sustains has caused her to lose her job due to excessive absences. Besides all of that, the nightmares are caused due to the sexual abuse she sustained at the hands of her father growing up. The novella continues escalating from there as Gillian faces her demons once and for all while attempting to get her life back to some normalcy.

“I hoped we could try to fix the past, salvage something, but no, you’re as stubborn as your brother was. Neither of you knew how to be loved.”

I’d imagine that’s a quote that most child predators end up using at some point in time during their disgusting career of ruining a child’s life. There is no doubt whatsoever that this is a novella full of evil and darkness. It’s no secret that I’m a huge fan of Kealan Patrick Burke.

Unlike most #bookstagrammers who have this elaborate process of picking their next book to read, I’m not one to use the ocean tides or astrological chart to determine what I’ll read next. I don’t make a poll on Instagram. I don’t ask my magic 8-ball. I have no fancy ritual. I simply walk up to my bookshelf and pick one. I mean, sure, I did make it a point to read HALLOWEEN FIEND in October, but beyond the obvious, I really don’t have any rhyme nor reason as to what the next book I read will be. Fancy rituals aside, I have been making it a point to alternate between 300+ page books and then a simple novella. My point being that when I finish a lengthier book, I grab a novella and as of late, it has been by KPB. (no offense to those of you with elaborate TBR book-picking rituals)

Back to JACK & JILL… the dark atmospheric writing is what you’d typically find in a novella by KPB. The book alternates frequently between Gillian’s nightmares and her present situation. KPB does this well and to further solidify your reading experience, Gillian’s nightmare sequences are italicized for your convenience. The darkness of the novella was exceptional and one that any horror aficionado would enjoy.

At just 104-pages in length, the novella gets down & dirty immediately which is another one of my favorite things about novellas. The action doesn’t let up from start to finish and despite the short length of this book, there’s a few twists and turns and of course, the ending is a brilliant roller coaster ride in and of itself. The monster in the novella is different from most and since child molestation and abuse is a different kind of terror, the novella obviously reads a bit differently than say, that of a ghost or paranormal story. The terror is different and the antagonist is one you want to pummel with a brick over and over again.

KPB continues to be one of my favorite novella authors, next to Carlton Mellick III and I enjoy alternating these little gems with larger novels. I thoroughly enjoy being tossed into the thick of the action from the moment I open the book. There’s no long, drawn out history. There’s no lengthy preface. I don’t need to absorb the nuances of a few dozen characters. I can immerse myself in a story that kicks my ass from start to finish. KPB’s descriptive and terribly horrific writing style is one I continue to be a fan of over and over again. If you’ve not yet read any of his work, I’d highly recommend it! It was a solid 4-star review for me, book worms!