Here to Stay by Mark Edwards : Book Review by Scott 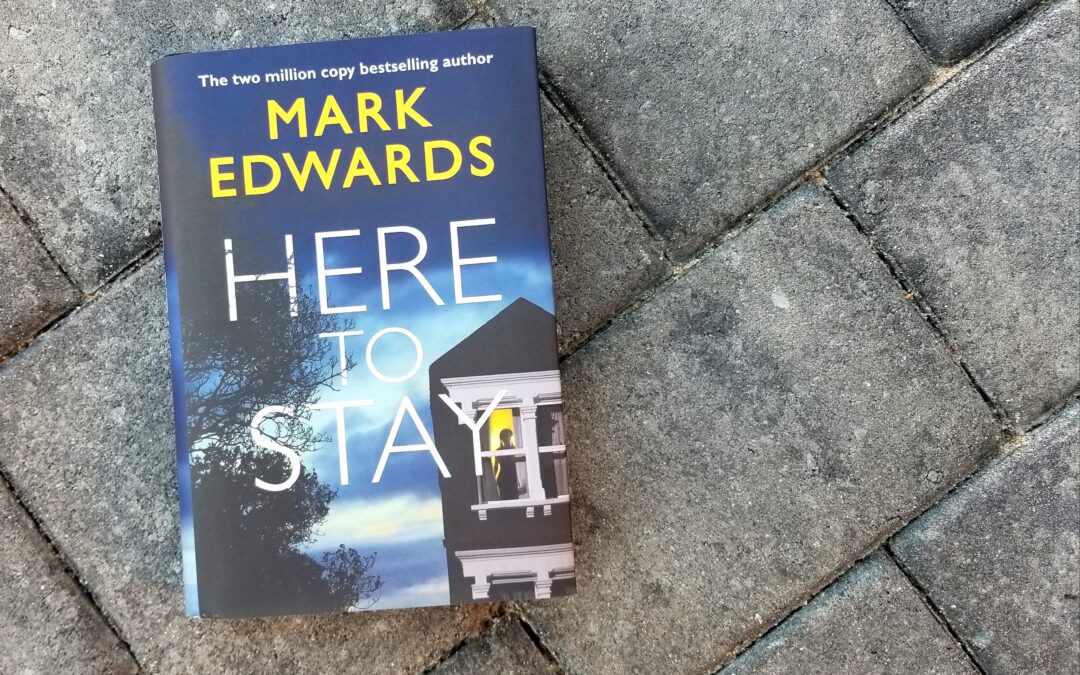 “Gemma Robinson comes into Elliot’s life like a whirlwind, and they marry and settle into his home. When she asks him if her parents can come to stay for a couple of weeks, he is keen to oblige – he just doesn’t quite know what he’s signing up for. The Robinsons arrive with Gemma’s sister, Chloe, a mysterious young woman who refuses to speak or leave her room. Elliot starts to suspect that the Robinsons are hiding a dark secret. And then there are the scars on his wife’s body that she won’t talk about …
_ _
As Elliot’s in-laws become more comfortable in his home, encroaching on all aspects of his life, it becomes clear that they have no intention of moving out. To protect Gemma, and their marriage, Elliot delves into the Robinsons’ past. But is he prepared for the truth? From the two million copy bestselling author comes a tale about the chilling consequences of welcoming strangers into your home.” – Amazon

Elliot is a distinguished teacher. His career is noteworthy and he’s an accolade of the community. His past and present are squeaky clean. You get the impression that he’s the kind of individual who has never even gotten a traffic ticket. Due to a random encounter, he meets Gemma. They form a fast passionate relationship. Gemma moves into Elliot’s beautifully remodeled home and they get married after just a couple of months.

Out of the blue, Gemma’s parents show up with her sister, Chloe. They tell Elliot and Gemma they will only be shacking up with them for a couple of weeks. You know, until they find a place of their own. Very strange things begin to happen once the in-laws show up that Elliot immediately begins to notice. A couple of weeks turns into 3 weeks and 3 weeks turns into a month and a month turns into two. Pretty soon, the in-laws have begun to order furniture as a means of making the place a bit more to their liking. Things quickly escalate from there which leaves Elliot on a hardcore investigation to find out who his in-laws are and why they’ve mysteriously showed up to infiltrate his life. With this marriage on the rocks, a sister-in-law who has barricaded herself into his home office and his in-laws turning his home into their own, Elliot is desperate to take back his marriage, his home and his life.

“I love you, too. And I just want to say one more thing. You’re nothing like your parents.”
“Thank God for that. If you told me I was like my Mum, I’d have to kill you.”

This book was a very pleasant surprise. I have no idea which #bookstagrammer shared this in their feed, but thank you. I plucked this one off my shelf and my only regret is I waited this long to read it. This book was absolutely infuriating in the best way possible. I mean, that in a good way, I swear. Imagine you have these toxic people whom you’ve never met before in your house, they set-up shop and simply refuse to leave. That’s it. It sounds so stupid. It sounds so trivial and insignificant. I don’t know how things are in the U.K. (where this book takes place) but here in the U.S., I’ve watched enough episodes of “Live PD” and “Cops” to know that if you’re the owner of a house and you have a guest refusing to leave, they’re escorted out if you just say the magic words. Those magic words are: GET THE FUCK OUTTA MY HOUSE. You call 9–1–1 and they’re escorted off the property in metal bracelets. That’s it.

But poor Elliot in HERE TO STAY evidently doesn’t quite have it that easy which is what was so infuriating about this book. Standing up to his in-laws isn’t an option. They walk all over him. His father-in-law is a bully. They mock him. They insult him. They placate him. They are horrible, horrible people and they will not leave. They just won’t. As an introvert and someone who adores my own personal space, I cannot think of a worse nightmare. I mean, maybe burned alive or dying another slow, agonizing death, but being in Elliot’s situation is easily in my top three. No joke.

The story is told from Elliot’s point of view and I quickly sympathized with him. Putting myself in his shoes was not at all difficult. The writing flowed effortlessly and I gobbled up 80 to 120 pages at a time. It was unputdownable from page one! It was a story that was so plausible and realistic to me. I really thought at one point in time I was going to fling the book across the room simply because of how angry I was getting. ARE YOU SHITTING ME RIGHT NOW?! was a common phrase I screamed while reading this book. The cat is my witness.

I think Mark Edwards did the story justice by explaining the legal process Elliot would need to take in order to remove his in-laws from his house. Despite not having any legal contractual obligation to his in-laws, apparently, you can’t just call 9–1–1 in the U.K. and tell them you want someone to get the fuck outta your house. There’s a whole process you need to take as a homeowner which is bizarre in and of itself to me as an American. Had the author not done this research, due diligence and explained the process, I would have also thought the story was preposterous and unrealistic like a few of the reviews on Goodreads and Amazon. It isn’t. It’s not preposterous at all, in my opinion. Every country has its own legal system and laws. Evidently, there are a lot of hoops to jump through in the U.K. as a result of this situation. The author explains it perfectly and it’s woven into the storyline brilliantly. I’m glad this was incorporated because I was about to call shenanigans on the whole storyline.

I do not want to go into many more details about the storyline as there are numerous twists and turns and the ending obviously leaves a shocker that had me hooting and hollering. I enjoyed Elliot’s character and he’s one that I rooted for from beginning to end. I thoroughly enjoyed this story. Even though I mostly read horror, I suppose I’d classify this as a thriller. And even though it’s a thriller, there were still elements which were absolutely horrific to me. LOL! The book is simplistic, but terribly effective at getting its point across. There’s a lot of depth to these characters which makes the story all that more believable. It’s fast-paced, it’s a page-turner and since it yanked at my introverted heart strings so relentlessly, I found myself having slight panic attacks while reading. This book plagued my mind at work. I’d finish reading for the evening, turn off the light and sit there staring at the ceiling hoping Elliot makes it out of this bullshit. I’d sit outside on my lunch break at work wondering where this rollercoaster is going to take me next. All of those reasons and so much more make HERE TO STAY a super easy 5-star read for me! HIGHLY RECOMMENDED, fellow book nerds! I’m off to add a third deadbolt to the front door!