Waiting Out Winter by Kelli Owen : Book Review by Scott 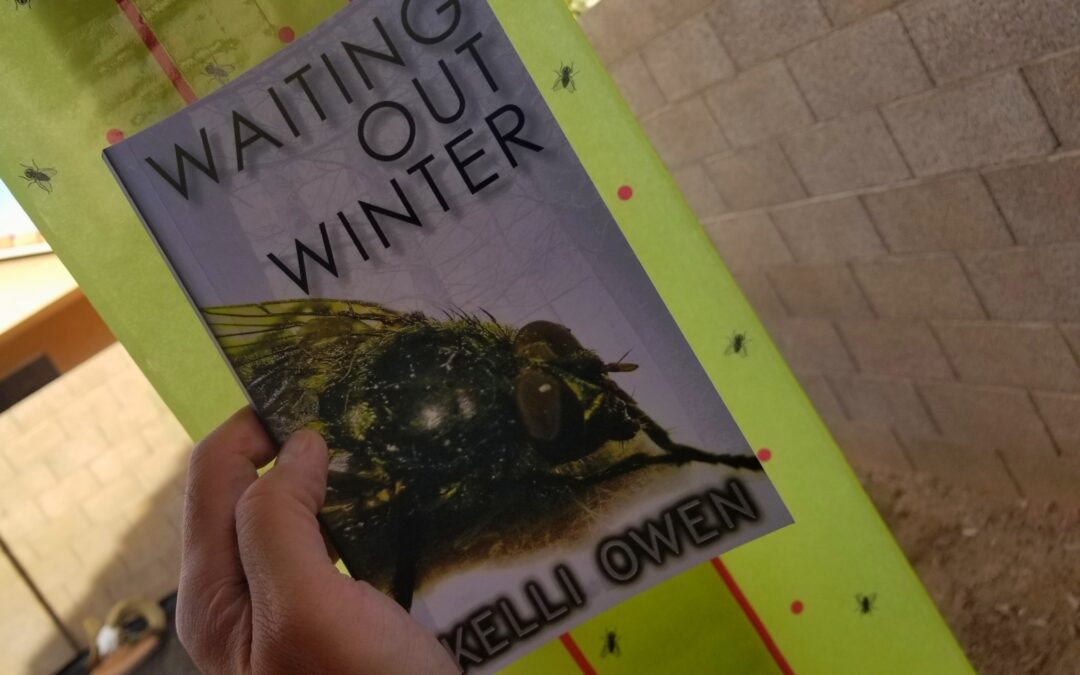 “Nick and the boys return from the summer’s last hunting trip to find the streets empty, the beachfront and park abandoned, and the windows of their own homes boarded shut. The hunters have become the hunted, in an apocalyptic plague that pits man against beast—very tiny beasts. And Nick is determined to keep his strength, courage and family alive during what could very well be the last winter of their lives.” – Amazon

So I waited to post this review because I was really hoping this would be a cooler photo. The flies here in Arizona have been horrible as of late. They land on you if you’re working out in the backyard. I got this giant hanging fly trap and of course, there is not a fly to be found. Sonofa… but enough about my photography shortcomings, here’s my review.

Nick and his buddies are away on a hunting trip. They’re driving back to Northern Wisconsin and the part squishy / part crunchy feel of the millions of tent worms under their tires meant something was seriously wrong. They roll into the town where they live to find it’s completely deserted. Plastic is covering all of the windows. Boards are nailed to all of the doors. There’s not a single soul wandering the streets. It’s as apocalyptic as it comes. Nick and his friends all go to their respective homes and their families clue them in on what’s going on. It seems that due to the infestation of the tent worms, the Dept. of Natural Resources have decided to release a small shit ton (I don’t know the exact measurement here, so just go with it) of black flies. Apparently, black flies are capable of consuming tent worms in mass quantities, especially when they’re genetically-altered and then released in a mass swarm. Unfortunately, the black flies were released far too late in this process. As a result, the black flies have created an epidemic of apocalyptic proportions. It seems that when you’re bitten by one of these genetically-altered flies, your body is consumed with sores, sickness, coughing and ultimately, death.

“It happened so quickly. From release to enough deaths to cause panic was only five days. People had begun dropping like, well… flies.”

I love, love, love apocalyptic stories. The terror of being out in a world we once knew fighting an organism while trying to maintain some semblance of life scares the shit out of me. I’m drawn to it though simply because of how terrifying it is. Zombies, mutants, flies… whatever. This story was scary to me because of the way in which the author focused on these select families. The story didn’t pan out and showcase the entire world being overrun by flies. It focused on a couple of families and their trials and tribulations throughout the story. The writing really struck a chord with me and it made me develop stronger feelings for these characters than perhaps I would have, otherwise.

At first, I was, like, WTF is even happening right now? We’re thrust into this story and waist deep in tent worms before we even know it. Oh, so real quick. If you don’t know what a tent worm is, do a quick search online. I’m only familiar with them due to having lived in Minnesota and Wisconsin for several years of my adult life. It’s a larvae that spins a cocoon in a web that resembles that of a spider web. It isn’t. It’s an actual larvae / caterpillar and there’s no spider involved. They’re often found dangling from trees where they can cause quite a bit of damage, but this is a book review, not a scientific report on the Malacosoma americanum. Getting back to the book… since it’s a fairly tiny novella, the action is fast-paced, very swift and wastes no time at all getting down to business. It was extremely believable only because I’ve heard of situations like this. I’m certain there’s plenty of them if you, again, do a quick internet search. It’s almost as though a bunch of good ‘ol boys at the DNR with too much time on their hands sit down and Google “What eats tent worms?”. Then a bunch of dudes at the corporate office sitting around eating bear claws and drinking coffee order a few crates of black flies. Yeah! Yeah! That’ll work! (no disrespect intended to the fine men and women of the WI DNR)

It probably goes without saying due to my enthusiasm that I thoroughly enjoyed this little novella. I loved the writing and I felt vested in the characters. Speaking of characters though, as a few reviews have mentioned – there are A LOT of characters for such a little novella. It wasn’t overwhelming. I didn’t have to take notes, but there’s no doubt that there were a lot of characters for a story barely over 100 pages in length. It didn’t deter me from devouring this story up in one sitting, but I did have a couple of points very early in the story where I was, like, – oh, here we go again! It’s just a personal preference, but if I have to keep track of a large panel of characters and their nuances, chances are, I’m going to lose focus. I’m no simple minded numbskull, but if I need flashcards handy due to the epic panel of characters you’ve created as a writer – I’m going to DNF the fuck outta your book. (no disrespect intended to those authors hell bent on introducing four dozen characters simultaneously in the first 20 pages)

So if you’re a horror fan, an apocalyptic fan, a fan of bugs, Wisconsin, the DNR or little terrifying books with a very plausible storyline – I’d highly recommend this one! The next book in this series is called THE HATCH and you can bet I’ll be reading that one soon. I’m anxious to know how this story continues! An easy 5-star read for me and one that I’d have no problem recommending to fellow #horrorbookstagram fans.