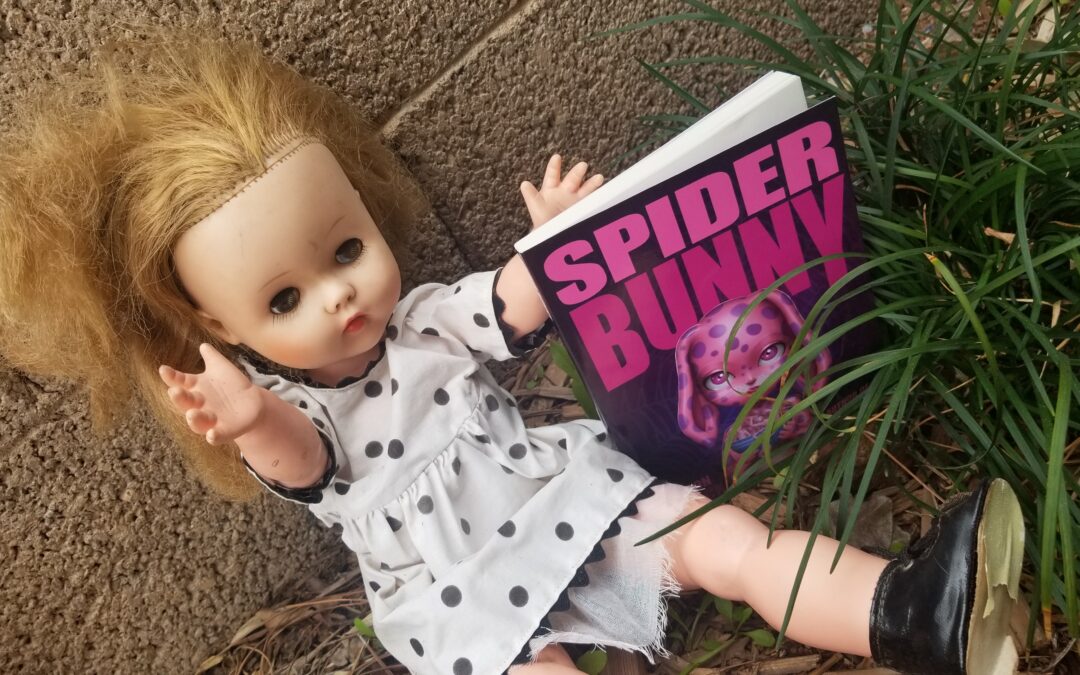 “Carlton Mellick III, the godfather of bizarro fiction, is back with a tribute to the unintentionally terrifying children’s commercials of the ‘70s and ‘80s.
_ _
Only Petey remembers the Fruit Fun cereal commercials of the 1980s. He remembers how warped and disturbing they were. He remembers the lumpy-shaped cartoon children sitting around a breakfast table, eating puffy pink cereal brought to them by the distortedly animated mascot, Berry Bunny. The characters were creepier than the Sesame Street Humpty Dumpty, freakier than Mr. Noseybonk from the old BBC show Jigsaw. They used to give him nightmares as a child. Nightmares where Berry Bunny would reach out of the television and grab him, pulling him into her cereal bowl to be eaten by the demented cartoon children.

When Petey brings up Fruit Fun to his friends, none of them have any idea what he’s talking about. They’ve never heard of the cereal or seen the commercials before. And they’re not the only ones. Nobody has ever heard of it. There’s not even any information about Fruit Fun on Google or Wikipedia. At first, Petey thinks he’s going crazy. He wonders if all of those commercials were real or just false memories. But then he starts seeing them again. Berry Bunny appears on his television, promoting Fruit Fun cereal in her squeaky unsettling voice. And the next thing Petey knows, he and his friends are sucked into the cereal commercial and forced to survive in a surreal world populated by cartoon characters made flesh.

From the cult author of Cuddly Holocaust, Cannibals of Candyland, and I Knocked Up Satan’s Daughter, comes an absurd horror tale that pulls you in and never lets go.” – Amazon

This story is definitely another one of my favorites by Carlton Mellick III! So much fun!! There is a whole lot of adventure packed into 140 pages of this little novella. So it starts out with Petey recalling the Fruit Fun cereal commercial he watched as a child that scared the shit out of him. Petey begins experiencing a very bizarre phenomenon. It seems out of the blue, he’s begun seeing Fruit Fun cereal commercials again. When the commercials begin playing, his television becomes an open portal of sorts. If he touches the TV screen, his hand is in the dimension where the commercial is airing. He later discovers after discussing with his Dad that this has, indeed, been a problem most of Petey’s life. It seems there was a situation when Petey was a child that involved him touching the TV during the airing of a Fruit Fun commercial. At that instance, Berry Bunny, the cereal’s mascot, grabs Petey by the arm and begins yanking him into the television. His Dad comes into the living room just as this is occurring and begins fighting to save Petey from the evil clutches of Berry Bunny! The situation was never discussed again until now…

So fast forward several years later to present day with Petey as a college student. His girlfriend is Peri. His college roommate is David. David’s girlfriend is Kim. Sitting around one evening, the four of them are having a great time just hanging out together. David asks them who their favorite cereal mascot was growing up. Petey, of course, talks about Fruit Fun and much to his dismay, none of his friends have ever seen the commercials he describes in detail and they all look at him like he’s crazy. That is until one day when they’re all hanging out together again and an old school Fruit Fun commercial begins playing on the television. I’m not going to go into a whole lot more detail, but Peri is yanked into the television by the evil Berry Bunny. It’s up to Petey and his friends to rescue her and destroy Berry Bunny once and for all!

I think it goes without saying that I loved this story! You can probably tell from my enthusiasm, right? Positive, enthusiastic book reviews from me are your cue to check out this book. If you’re a newcomer to Carlton Mellick III, this would be a good title to read! If you’re a veteran CM3 fan, this a must add to your collection! The writing flows fast, the adventure is whimsical, yet strangely evil and always disturbing like typical CM3 fashion. The story is original, unique and kept me turning page after page. I tried to savor it, but I read this book in one sitting. There’s no doubt about it. This book is out there. But again, it’s CM3 and if you know his work, then you already know that going into this book or anything else by him for that matter.

The book has its moments of terror and being downright scary and obviously, fucked up. The latter is what CM3 does best. I was sitting up in bed after finishing this novella and I really wish my mind worked like this. How in the world do you come up with something so incredibly disturbing? I can be certain that when I turn the pages of a CM3 novella, I shall be thoroughly entertained and my mind will become just a bit more warped than the last CM3 novella.

This is an obvious 5-star review from me. I will continue supporting the indie horror / bizarro / splatterpunk genre because I vehemently believe there needs to be more of this in our local bookstores. It’s fun. It’s twisted. It’s entertaining. I can be certain that I will be whisked away to a horrific novella of epic proportions when I read a CM3 novella and isn’t that the whole point of reading? I am hoping my reviews resonate with someone reading them. Whatever book you choose to read, I hope it allows you to escape. I hope it allows you to be whisked away to the land in the book you’re currently reading. Check out Spider Bunny! A little novella guaranteed to whisk you away to a super twisted cereal commercial set where a demented pink bunny with purple polka dots will try to turn your body into little chunks of cereal flakes to be eaten. Sounds like fun, right? …of course, it does!