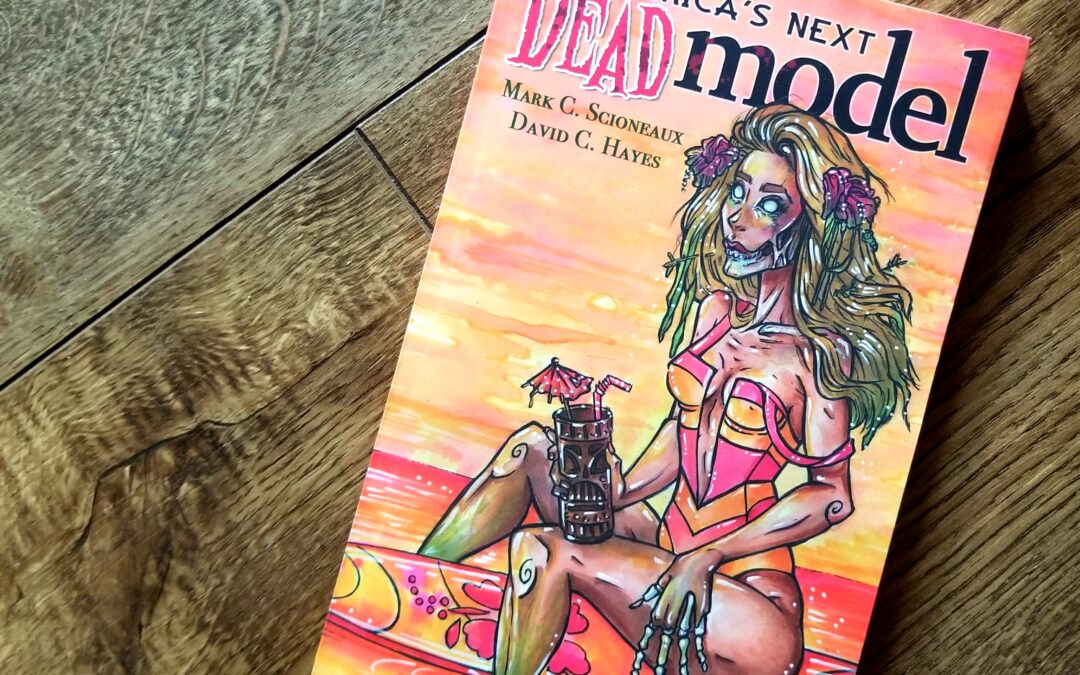 _”The tropical island is a paradise and the perfect place for sleazy promoter Randy Miller to stage a photo shoot featuring his gaggle of up and coming young super-models-in-training. Chief among them is Monique, a beauty that Randy is betting on to make their newest calendar fly off the shelves. What Randy, Monique, and the rest of them, didn’t count on was a mad killer stalking the sands and making it run red… with either blood or sangria, no one is too sure. Can this particular group of men and women with, quite possibly, the loosest morals in all of recorded history survive? Their fifteen minutes are up! _

Watch as these women must fight for survival!

See them drink way too much sangria!

Recoil as they prove… beauty is only skin deep!” – Amazon

What a hokey book, but oh so fun! Randy Miller is a sleazeball movie promoter who has bought a portion of a small island. He’s displaced all of the locals on his parcel of land so he can shoot a movie. The movie he’s shooting is a random video full of college aged models scantily clad in tiny bikinis sipping drinks under the sun in the sand on an island. Not much to it.

Randy has hired a couple of cameramen, a couple of A/V geeks, his talent scout and the models of his choosing. With everyone arriving on the island, Randy is anxious to get everyone settled and the backdrop ready for the video shoot. As preparation begins, Randy starts requesting the talent begin taking their places. Things aren’t going as smoothly as he had hoped because one by one, everyone invited to the island begins disappearing. Not only do they begin disappearing, but it’s soon discovered they’re all being brutally murdered. Who’s doing the killing and how will Randy and his gang of models beat the killer at their own game?

This is a really fun book. It’s full of everything I love in a cheesy horror novella. It’s got lots of blood and gore. Awesome slasher violence from circa 1980’s. Hokey sex scenes and dialogue. It was fun just the way it should be. You can tell from the title alone that you’re in for a fun read and if you keep an open mind, I’m certain you’ll enjoy it too.

Obviously, it’s a novella meant to be tongue-in-cheek and it oozes hokey-ness. If you take this book seriously, you’re going to be in for a rude awakening. If you’re worried about character development and eloquent writing and emotional plot backstories, this probably isn’t the book for you.

I didn’t have any major gripes with the book at all except there were quite a few spelling errors and grammatical errors. Nothing terribly distracting, but definitely noticeable. This is a real turn off for me. As a reader, I shouldn’t have to tell you about your spelling errors. I can see one word… maybe two. I didn’t count every misspelling, but I know it was greater than two.

Other than this minor issue, I enjoyed AMERICA’S NEXT DEAD MODEL! Fun, fun, fun read and a solid 4-star book for me. Again, have an open mind, have fun, shake off the crappy work day or school day you had and just immerse yourself in a cheesy horror novel to take your mind off everyday life. It was a fun little novella that I really enjoyed and I think you will, too!