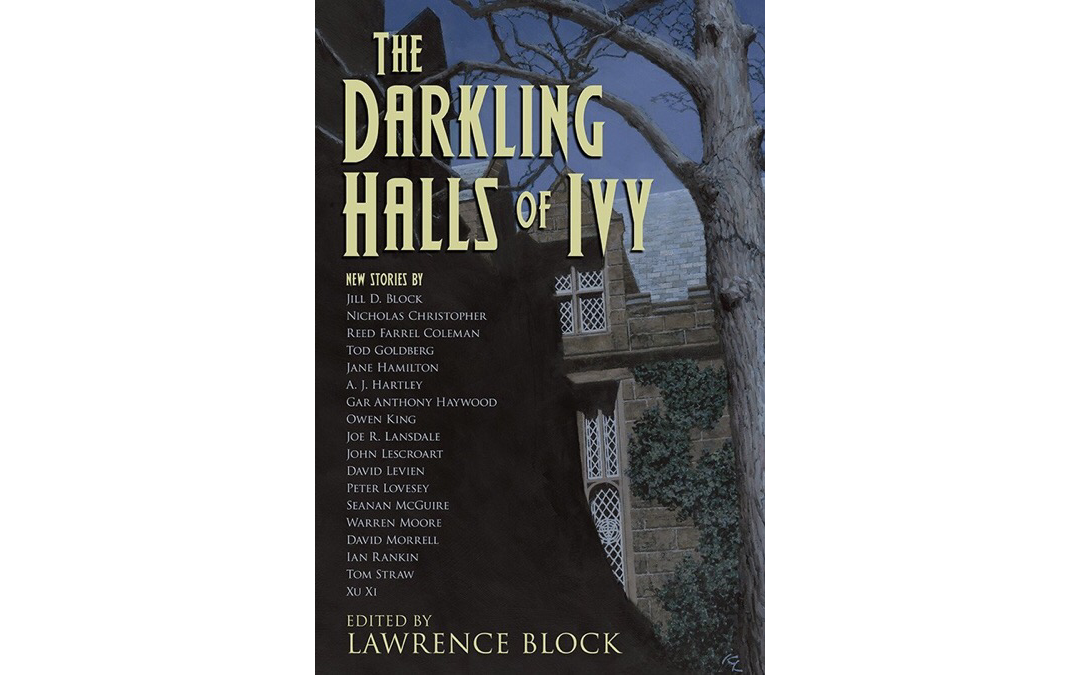 “In recent years, colleges and universities have become known for their “trigger warnings” and “safe spaces”–but as the 18 authors who penned stories for this powerful new anthology can tell you, there’s plenty of danger still lurking behind the stolid stonework, leather-bound volumes, and thickets of ivy.
_ _
Award-winning editor Lawrence Block has assembled a Who’s Who of literary luminaries and turned them loose on the world of academia, where petty rivalries and grand betrayals inflame relations between professors and students, deans and donors. From Ian Rankin to Joe Lansdale, Seanan McGuire to David Morrell, each author reveals the dark truths and buried secrets that make institutions of higher learning such a hotbed of controversy. You’ll encounter plagiarism, sexual misconduct, and brutal competition–not to mention secret societies, cover-ups of murder, and one near-future course of study that makes The Handmaid’s Tale look like Mother Goose.

So: collect your supplies, plan your schedule, and prepare to pull an all-nighter, because The Darkling Halls of Ivy is required reading.” – Amazon

As with any anthology there are some that really stand out as great and some that are bad, and a bunch that are somewhere in the middle. The general vibe I got was that many of these writers are annoyed with the way students are treated today and this was their way to write about some of their frustrations and be able to have them turn more violent and deadly… which I enjoyed.

The ones that I really enjoyed were; Requiem for a Homecoming by David Morrell (it had a murder mystery movie feel to it with a twist at the end), An Even Three by Reed Farrel Coleman (a woman is sick of the men’s club in academia and takes it to the extreme), The Reasoners by Ian Rankin (a mystery involving secret societies), and Goon #4 by Tod Goldberg (an assassin trying to find his joy).

The ones that I really didn’t care for… but as with any opinion, others may really like, were; Alt-AC by Warren Moore (almost the entire story was the main character complaining how bad the education system is when it comes to seniority and new teachers… while I completely agreed with it all, I didn’t enjoy an entire story complaining about it.), Monkey in Residence by Xu Xi (it dealt with the politics of today and was weird and was just not something I enjoyed), and Why She Didn’t Tell by John Lescroart (this story was about rape… a man writing about a woman getting raped… I would need to have a face to face discussion to talk about this more in depth, and it just didn’t feel like it fit with the rest of the stories.)

The others were middle of the road for me, some better than others. If you’re involved in higher education, like anthologies, or want to read one of the stories because you really like the author then you should definitely pick this one up.