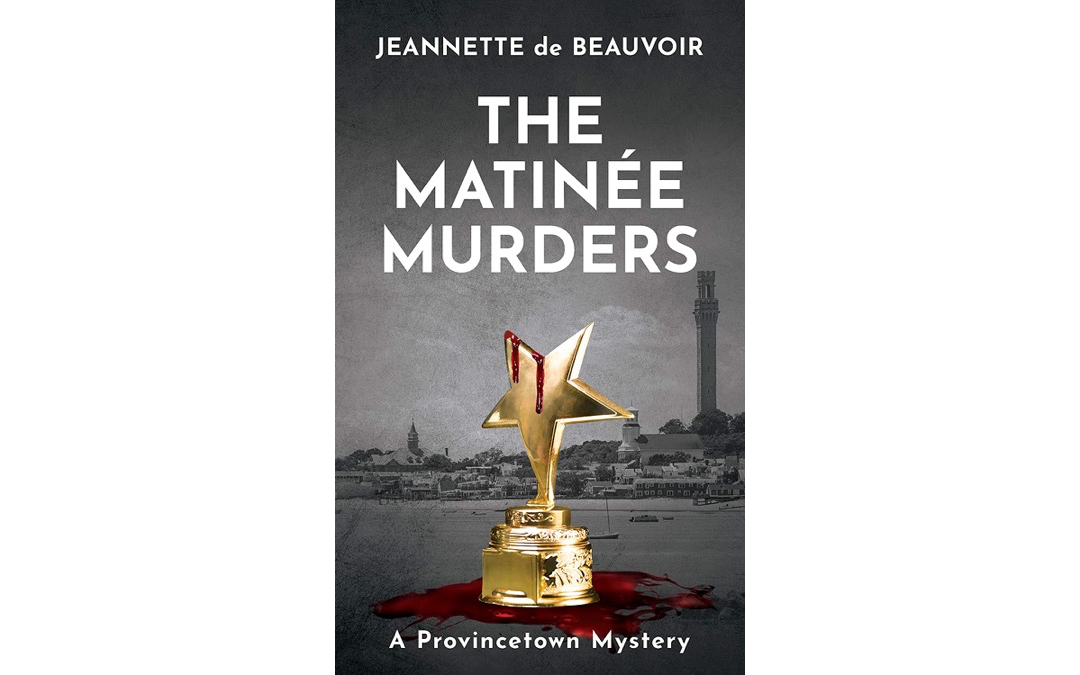 “It’s time for the Provincetown International Film Festival, and wedding planner Sydney Riley has scored a coup: her inn is hosting the wedding of the year. Movie star Brett Falcone is to marry screenwriter Justin Braden, and even Sydney’s eternally critical mother is excited. The town is overflowing with filmmakers, film reviewers, film buffs, and it’s all the inn can do to keep up with the influx of glamorous celebrities and host their star-studded events.
_ _
But when Sydney opens a forbidden door in the mysterious Whaler’s Wharf, she discovers the body of a producer–and a legion of unanswered questions. Who strangled the innocuous Caroline Cooper? What dark force followed Brett and Justin from LA? Why is her boss Mike tense and double-checking every room at the inn? And is Mirela really leaving P’town forever? Sydney and her boyfriend Ali need to find the answers fast before another victim takes a final bow.” – Amazon

The Matinee Murders by Jeannette de Beauvoir is the first book in the Sydney Riley Mysteries that I’ve read, and even though it’s the sixth book in the series I had no trouble catching up on the character’s lives and their past adventures. Although I would classify this as a cozy mystery it does break from the norm a tiny bit by including some swear words, which I thought were used appropriately to convey the stressful situation that was happening.

One thing that really stood out to me was the mention of the Covid-19 virus (although not specifically named) on page 214. I know this book comes out on June 1st, but I wonder when de Beauvoir had put it in the story, and if she had to do a bit of a rewrite. But having received an ARC in paperback form I can’t see it being reprinted to include that bit. Just something interesting I noticed…

The mystery was written well and I didn’t know the killer until towards the end and de Beauvoir included lots of suspects and some red herrings. After the killer was caught there was a second incident that happened, and while it was fine, I also thought it was a bit weird and felt like it could have been left out of the story. It felt like it came out of almost nowhere and was rushed.

Since I haven’t read the mystery series from the beginning I admit I’m not as invested in the characters, but they were still written very well. Even though Mirela is only in the book a small amount, I wanted to get to know her more and I could see her being someone I would be friends with. Ari, the boyfriend, annoyed me a bit. It’s book six and if you’re not supporting your girlfriend 100% percent by now it’s just something that annoys me in any cozy mystery series, but this wouldn’t deter me from reading more books in the series. And another character in the book was Provincetown itself. The descriptions of the tourist town made me feel as if I was there, and reminded me a lot of a mashup of my hometown, Eagle River, and of another town in Wisconsin, Wisconsin Dells.

I would suggest you start the Sydney Riley Mysteries from the beginning with Death of a Bear.