In the Swim of Things by Tracie Banister : Book Review 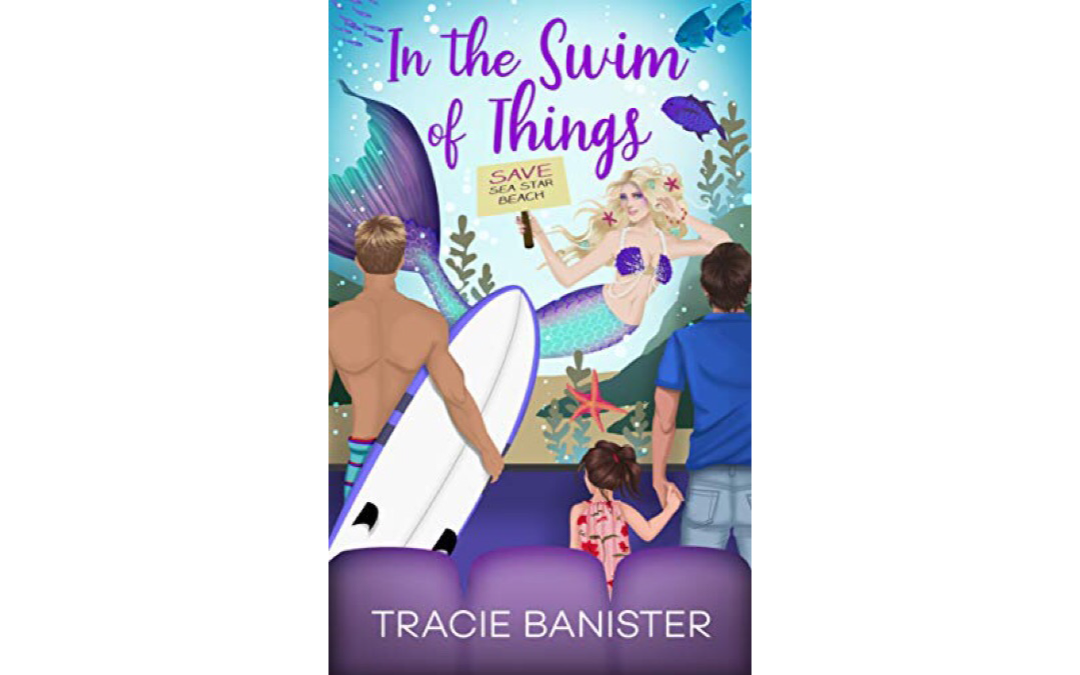 Ocean-loving Kyra Goodwin had to give up her dream of becoming the female Jacques Cousteau in order to take care of her father and brother, but being a mermaid at the Cape Cod Aquarium is pretty fintastic as far as alternative careers go.

Of course, life as a half-fish/half-woman isn’t all sunken treasure and Ariel twirls. Kyra has to deal with perpetually pruney fingers, eyes irritated by saltwater, and bratty kids on the daily, plus her glam alter ego can make dating really weird. (So many men have pervy siren-of-the-sea fantasies!) When she meets hunky surfer Cade, and he’s into her without knowing what she does for a living, Kyra thinks she’s finally won the romance lottery.

Unfortunately, Kyra’s plans for a carefree summer of catching waves with her new boyfriend run aground when Sea Star Beach, a place that holds great sentimental value for her, is taken over by a big-city developer who wants to build an exclusive resort. Kyra’s crusade to save her beloved beach threatens both her job and her relationship with Cade as does her growing closeness with her irresistibly broody merwrangler, Declan, whose precocious daughter is intent on playing matchmaker.

When a new family drama arises just as Kyra receives an offer that would turn her greatest desire into reality, she’s torn. Will she do what’s expected of her, or dive in and follow her heart?

My biggest complaint when I read romance is that the will they/won’t they goes on too long for my taste. And I’m not just waiting for the romp in the bedroom/garden/water because if that was the case I would just pick up more erotica. I’m looking for the relationship adventures; the dates, meeting the friends/family, seeing how well they treat each other, etc… and In the Swim of Things by Tracie Banister, she really delivers all of those events that I look for in a romance, including humor, which was such a wonderful bonus!

Kyra and Declan have a one night stand, but he’s not in the right headspace so Kyra moves on. Which is awesome! No waiting around and she goes on to live her life while still being friends with Declan. Then she meets Cade. Here is where Banister fooled me a bit since I thought for sure Cade was going to be more involved in the development of the resort, but the amount that he was involved in happened to be perfect. Kyra realizes that Cade is involved with her sworn enemy, but they handle it well and they don’t let it simmer and ruin their relationship. What grown ups acting like reasonable adults?!? That was so refreshing.

A lot more fun, sweet, and sexy things happen not only between Krya/Cade/Declan, but the other characters in the book which adds lots of wonderful layers to the novel. Plus, the world of professional mermaids and all the gorgeous costumes, underwater scenes, meet and greets, and party scenes that come along with that makes me want to be part of their world. Then there’s the humor, which I always love to find in a romance, is found in spades, especially when it comes to Slater.

I was really impressed with In the Swim of Things and I’m excited to read some of Banister’s other books including Izzy as Is, Mixing It Up, and Twin Piques.