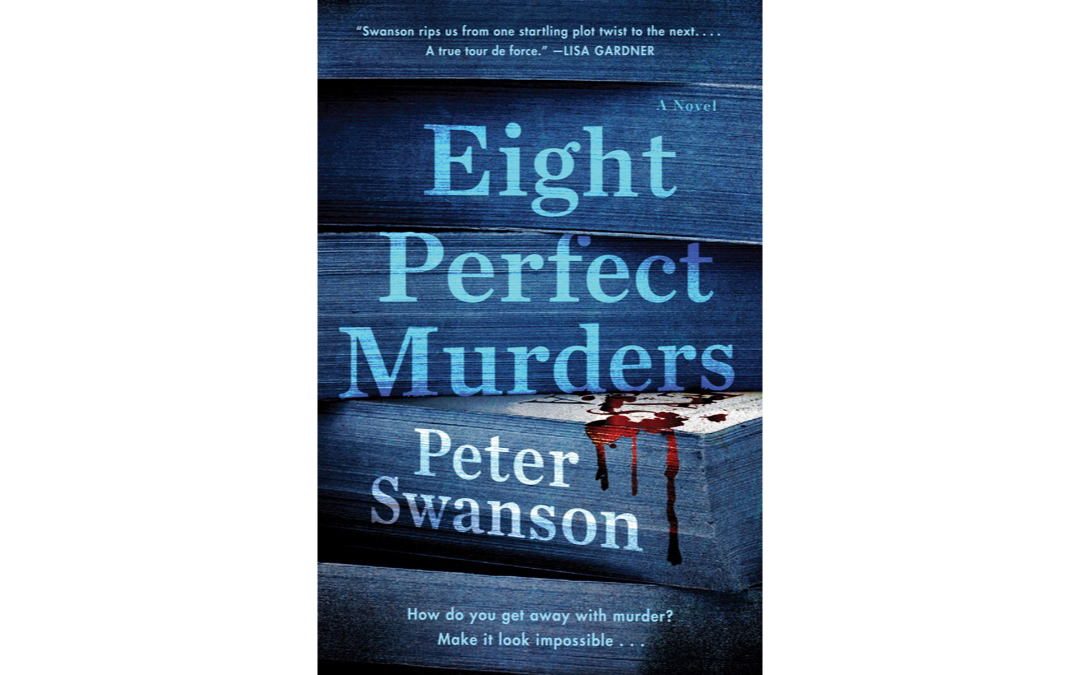 “Years ago, bookseller and mystery aficionado Malcolm Kershaw compiled a list of the genre’s most unsolvable murders, those that are almost impossible to crack—which he titled “Eight Perfect Murders”—chosen from among the best of the best including Agatha Christie’s A. B. C. Murders, Patricia Highsmith’s Strangers on a Train, Ira Levin’s Death Trap, A. A. Milne’s Red House Mystery, Anthony Berkeley Cox’s Malice Aforethought, James M. Cain’s Double Indemnity, John D. Macdonald’s The Drowner, and Donna Tartt’s A Secret History.

But no one is more surprised than Mal, now the owner of the Old Devils Bookstore in Boston, when an FBI agent comes knocking on his door one snowy day in February. She’s looking for information about a series of unsolved murders that look eerily similar to the killings on Mal’s old list. And the FBI agent isn’t the only one interested in this bookseller who spends almost every night at home reading. The killer is out there, watching his every move—a diabolical threat who knows way too much about Mal’s personal history, especially the secrets he’s never told anyone, even his recently deceased wife.

To protect himself, Mal begins looking into possible suspects … and sees a killer in everyone around him. But Mal doesn’t count on the investigation leaving a trail of death in its wake. Suddenly, a series of shocking twists leaves more victims dead—and the noose around Mal’s neck grows so tight he might never escape.” – Amazon

Eight Perfect Murders by Peter Swanson was a soft read for me. I don’t know a better word to use. I kept reading because I was enjoying it and finished it quickly, but I wasn’t rushing to find out what was going to happen next like in some suspense and a lot of thrillers. In a way this felt like an ode to Swanson’s love for mysteries.

I think if people are also fans of the classic mysteries and authors that Swanson includes in his list then the mystery in Eight Perfect Murders should be easy for them to figure out early on. I felt like Swanson had joined me with a glass of brandy next to a roaring fire and he was telling me a story of his past, not worried about the consequences when the reveal happened.

He does give away the endings to the mysteries in his list, so if you haven’t read them and are planning to do so, you may want to read them before Eight Perfect Murders. This didn’t bother me too much because I had read most of them already and the ones that I hadn’t, I already knew the endings either because I had watched the movie or I was told the endings before because people refer to them so much while making lists and writing articles.

The one thing that really stuck out to me and I felt was odd, not really needing to be in the book, was the way his partner’s wife was coming on to him at the end. It just felt like it was meant for a different story. I don’t see how it added anything and it didn’t need to happen for the reveal.
I was a bit sad that it wasn’t a situation where he was being messed with by one of the other characters. I really thought it would have been a cool hook and I do love a female serial killer.

This is the first book I’ve read by Peter Swanson, but I’ve heard great things about his other books so someday I’ll get to some of them. Life is too short and there are way too many books!