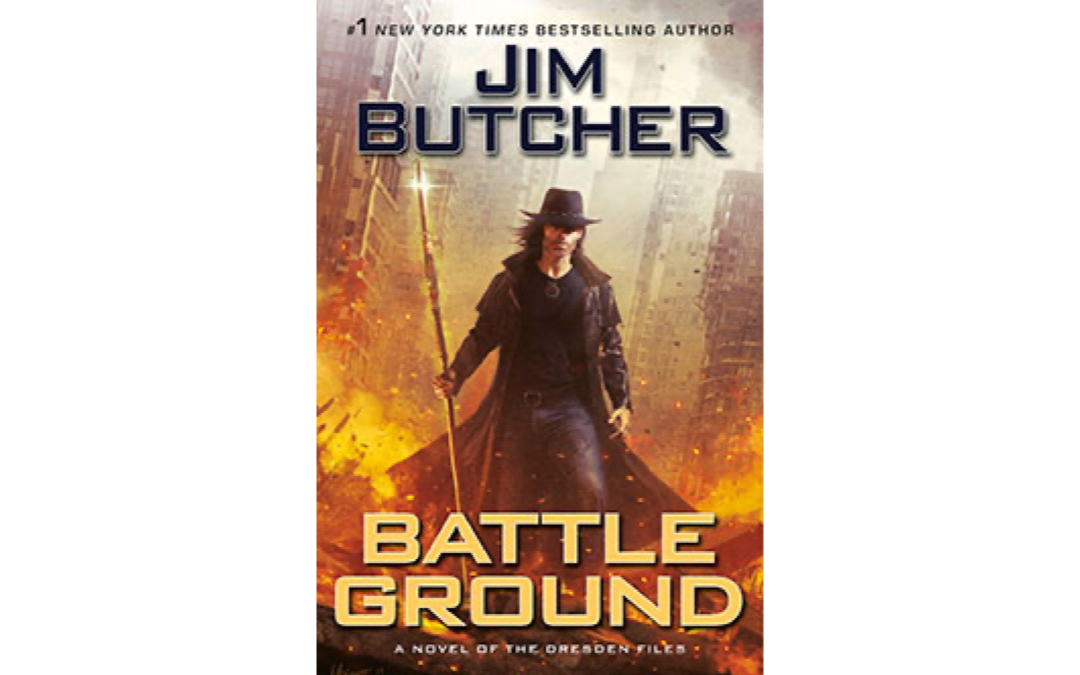 “Harry has faced terrible odds before. He has a long history of fighting enemies above his weight class. The Red Court of vampires. The fallen angels of the Order of the Blackened Denarius. The Outsiders.

But this time it’s different. A being more powerful and dangerous on an order of magnitude beyond what the world has seen in a millennium is coming. And she’s bringing an army. The Last Titan has declared war on the city of Chicago, and has come to subjugate humanity, obliterating any who stand in her way.

Harry’s mission is simple but impossible: Save the city by killing a Titan. And the attempt will change Harry’s life, Chicago, and the mortal world forever.” – Amazon

Forzare! While Peace Talks was tepid, Battle Ground by Jim Butcher is on fire. Literally. And the storyline in this one is excellent too. 😉

Whenever you come into a series, but especially a fantasy series, after five books there is way too much to explain in a review. And the Dresden Files is on book 17, I don’t think a lot of authors can boast about that feat. So I won’t be getting into many details, besides if you’re a long time fan, you’re going to want to read it yourself with no spoilers. And if you’ve never read any of the Dresden Files before, you need to start with the first book, Storm Front. And you can thank me later!

I will say all of my complaints about Peace Talks have mostly been rectified. Harry isn’t a hormonal teen in regards to the Winter Mantle, he’s way too busy fighting for his and everyone else’s lives. Although I think Butcher still managed to mention it a couple of times. The repetition was not nearly as prevalent, but for the love of Cthulhu, we all get it, Butters is a small, but mighty man. And I still needed more Bob.

But, Battle Ground was so excellent, and exactly what a Dresden Files book should be.

Butcher was able to finally lay to bed a character that was problematic for where the books are heading. And I really can’t say I was sad about it, which actually shocked, since I cried a bit at various other things in the book. Cried?!? Yes, some of the things in there intersected with the actual world we’re living in right now. You can look at the deeper meaning in Battle Ground, or not look as close and just enjoy the story.

The fight scenes are epic, and I do not use epic often. I want to write so much more about them, but you really need to read all the surprises for yourself. But I will leave you with, pizza has more than paid for itself over the years. And that is just a teensy part of all the combat.

And with any good Dresden Files book we are left with new alliances and new enemies. Oh, and Harry has a lab again.