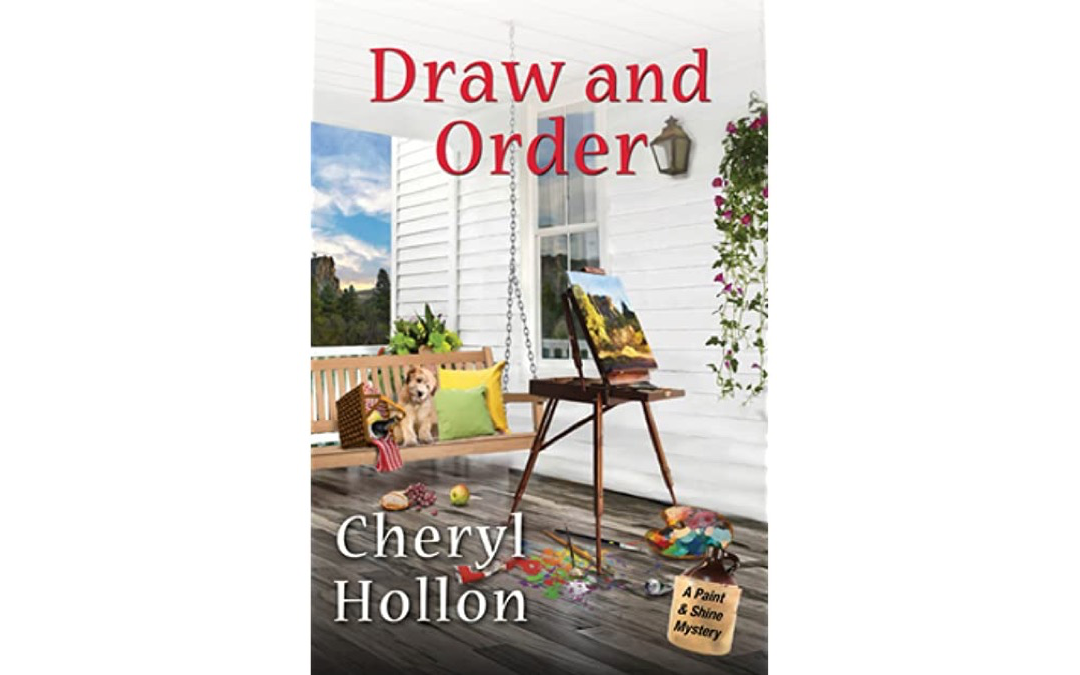 “For her latest excursion, Miranda is thrilled to take a close-knit group of rock climbers, the Risky Business Adventurers, up the challenging Battleship Rock Trail to paint and sample moonshine. But the outing is cut short when they discover a skeleton near the trailhead. Even more startling, the bones belong to Howard Cable, Miranda’s cousin…and a former classmate of the Risky Business group.

The sheriff chalks it up to a hiking accident, but Miranda isn’t convinced that Howard, an experienced woodsman, died within sight of a well-marked trail. So, with the help of Ranger Austin Morgan, Miranda sets out on her own investigation and discovers that the Risky Business group is keeping plenty of secrets. But is one of them hiding the truth about Howard’s death?” – Amazon

I enjoyed Still Knife Painting, the first book in the Paint and Shine Mysteries by Cheryl Hollon and think book two, Draw and Order is even better than the first!

In Still Knife Painting there were some things I thought could have been improved a bit, but since it’s the first book in the series, it’s totally understandable to have some growing pains. In Draw and Order, Hollon fills in those gaps and continues to impress me with her well thought out characters and fantastic descriptions of the farm house and all it’s out buildings, along with Lover’s Leap and the various trails in the National Forest.

Miranda is trying to juggle so many things in this book that I was amazed she had time to solve a mystery. But that’s where the community came in. Her mother came to visit to help with her Aunt’s grieving process, but ended up helping Miranda even more. Ron is a new character with flaws, but he has a lot of potential and could be an interesting love interest for Miranda’s mom. And Austin, the forest ranger and love interest for Miranda is always there to lend a hand.

There is more mention of moonshine history and making which is why I love to read, to learn new things. And I’m excited for when the moonshine still is actually up and running… maybe we’ll learn even more about the process. And there is so much Southern food and idioms that it gives Draw and Order such a unique feel to it.

As far as the mystery went, although the body was found early on, it was a bit slow to get started. By the middle it was picking up steam though. With the various professions of the Risky Business Adventures group I was thinking it would be A Murder on the Orient Express situation (which would have been super cool!), but it went in a different direction and ended with a big bang.

If you’re looking for a cozy filled with lots of Southern flair and a fantastic community, you should check out the Paint and Shine Mysteries!