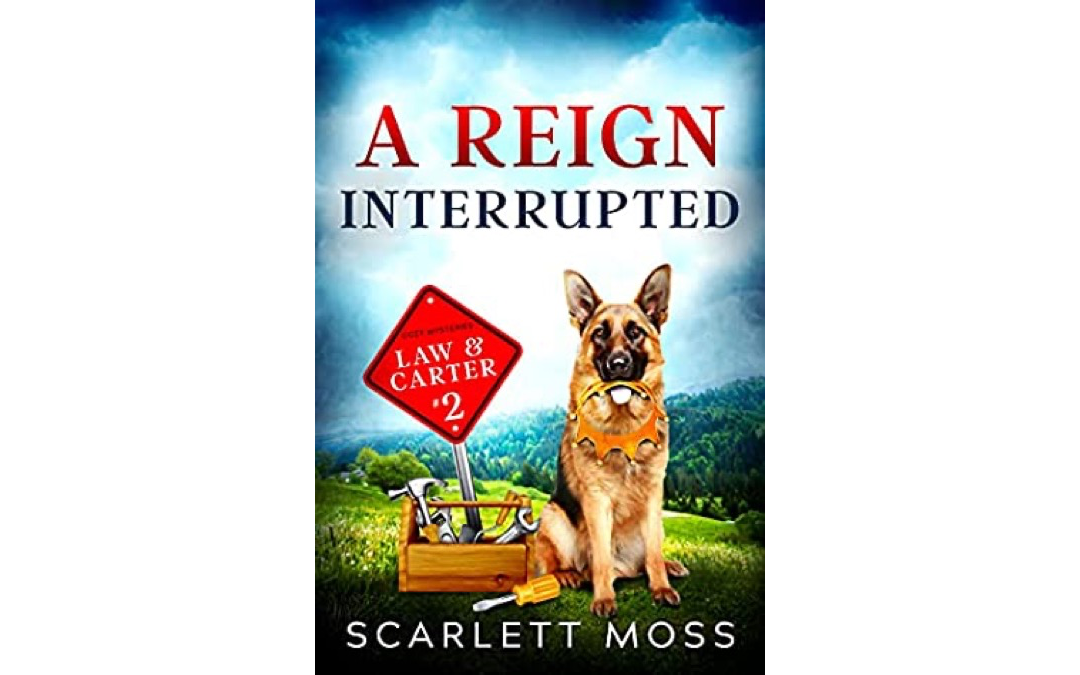 “She left the big-city glamour for small-town friendships. But adjusting to the peace and quiet is turning out to be murder…
_ _

Carter Cash is excited by her future. Running a glamping and luxury yacht vacation business with her bestie, she and her retired police dog have reinvented themselves living in a yurt community. But when the bullying local queen of renovations is found dead after a public confrontation, Carter is alarmed that the cops are pointing the finger of guilt her way.
_ _

Determined not to leave, proving her innocence to the cops, the mystery show fanatic and her K-9 partner set to work sniffing out suspects. But her only real lead is the victim’s attorney ex-husband… And with him vowing to defend whoever murdered his former spouse, Carter fears digging up clues will only make her look more guilty.

Can she clear her name before the true killer slams her behind bars?” – Amazon

Carter and Law are back in A Reign Interrupted by Scarlett Moss, but this time Carter has to prove her innocence… but no worries, when one has such a great group of friends and a former Police K-9!

We start A Reign Interrupted a little bit after A Dealer Dead Ahead, with Carter and Matty (their older friend) revealing the names of their new yurts, and of course, it ends in murder. Since Carter is the one accused this time, she dives in without asking for as much help from her friends… and I really hope in book three we see more of their help. Law is also there to offer his opinions, although Carter doesn’t often realize what he is saying.

The mystery was a bit easier to solve in book two, mainly because there weren’t as many suspects. But who the murderer was and the reason behind it was different from what I’ve read in a lot of cozies. I was also hoping that we would get to see some of the camp in action, but maybe we will in book three. And I’m really excited for when they get the yacht out of dry dock and start to decorate and throw fabulous fundraisers on it. So, here’s looking forward to A Super’s Demise!